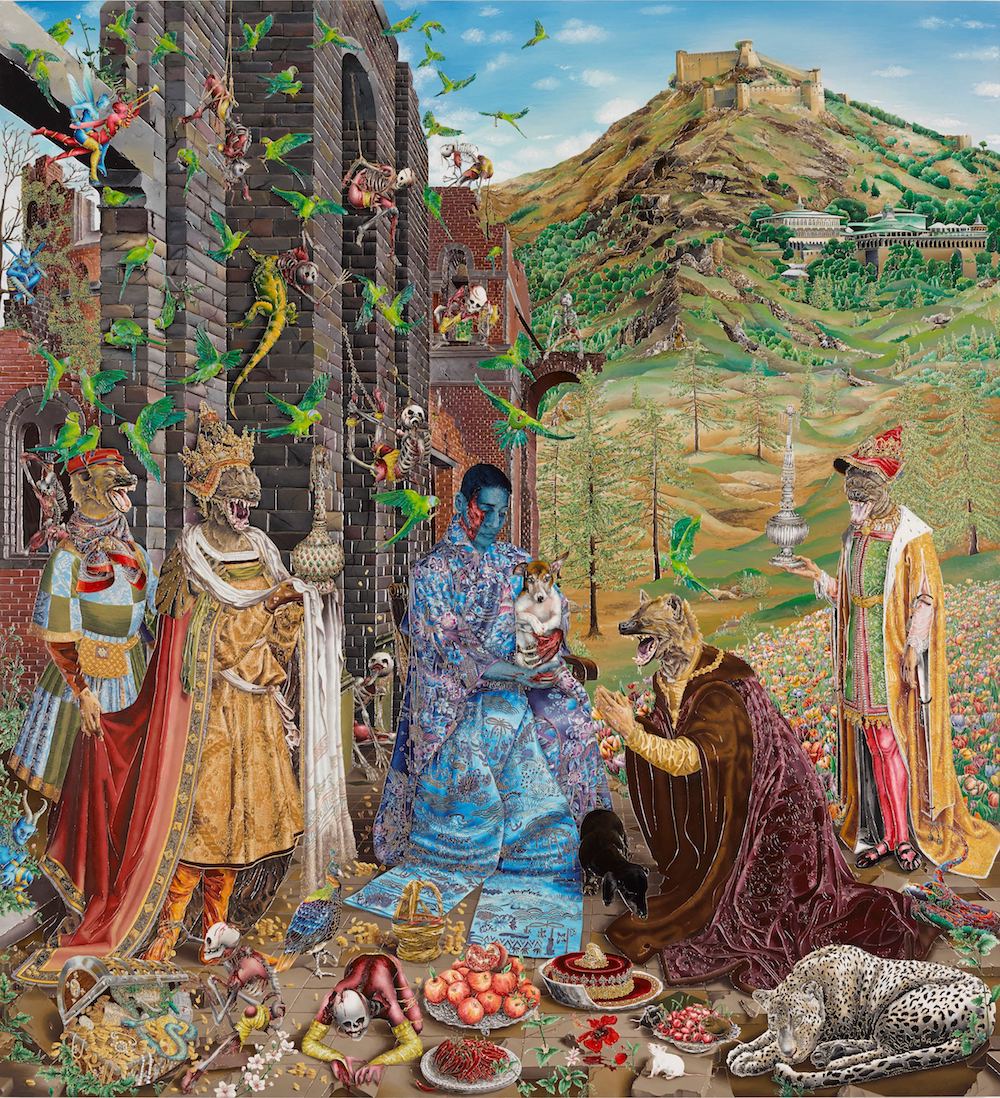 This is a must see. Even the lovely photos that we have here cannot possibly bring you the size, the majesty and the detail of the artworks which Raqib Shaw exhibits in Edinburgh until 28 October 2018.

It is also part of Edinburgh Art Festival which runs until 27 August 2018. Look out for news on Twitter by searching for the hashtag #EdArtFest

This is a free exhibition, although you will be hard pressed not to spend some time in the café (my favourite is the ginger oat slice which I cannot resist!) The artist is Indian. He was born in Calcutta in 1974 and was brought up in Kashmir. It is probably this in his early years which has given him a love of colour, and these works are full of bright colours. The treatment is enamel, but even this description cannot show the two dimensional relief which Shaw works in.

His family are successful merchants trading in rugs, shawls, jewels and antiques both in India and further afield. Shaw worked there from a young age but then travelled to London at the age of 18 where he became entranced by the art and in particular Hans Holbein the Younger’s The Ambassadors created in 1533. Five years afterwards Shaw returned to London to attend Central Saint Martin’s College of Art and Design when the National Gallery became his permanent place of study. The detail which he spotted in works by Botticelli and Bronzino became a mainstay in his own art.

By the time Shaw enrolled on his Master’s course at Saint Martins in 2001, he had already attracted considerable attention. Soon he was widely exhibited across the globe, with exhibitions at some of the world’s leading art institutions, among them London’s Tate Britain (2006) and New York’s Metropolitan Museum of Art (2008). He has lived and worked in London since he first moved, and now paints from a former sausage factory in south London, which he has converted into a multi-storied, floral-laden home and artist’s studio.

His method is to make preparatory drawings and tracings of the painting he will create. He then transfers the composition on to wooden panels and makes a design with acrylic liner. This leaves a slightly raised line within which he paints carefully one drip at a time with a mixture of Hammerite and enamel paint for outdoors and some household gloss paints. He uses really fine needle syringes and a porcupine quill to move the paint around as he wished. He sometimes adds rhinestones and gems.

The exhibition in Edinburgh features on his reworking of Old Master paintings. In February last year, Shaw visited Scotland and the Scottish National Gallery for the very first time, to view Paton’s fairy-tale masterpiece The Quarrel of Oberon and Titania, 1849. Reproductions of Paton’s famous work had, the year previous, inspired Shaw to paint Self-portrait as the Opium Smoker (A Midsummer Night’s Dream). Now those two works will be displayed alongside each other. Both paintings are sprawling, resplendent works of art which elaborately draw upon characters in William Shakespeare’s (1564-1616) comedy A Midsummer Night’s Dream (1595-96). Oberon and Titania, King and Queen of the Fairies, feature in Paton’s painting, whereas in Shaw’s painting is Nick Bottom, an actor turned into a donkey by a fairy. It is a self-portrait in which Shaw has portrayed himself as the donkey, dressed in a richly embroidered kimono and puffing on an opium pipe whilst surrounded by a surreal, hallucinogenic world featuring fairies akin to those in Paton’s painting.

During the visit to see the Paton artwork, Shaw also took the opportunity to view another artwork he had long admired but had never seen in person, Cranach’s An Allegory of Melancholy, which is based on Albrecht Dürer’s (1471-1528) celebrated engraving Melancholia, 1514. Unlike Dürer’s figure, who some argue represents brooding genius, the seated woman in Cranach’s version appears to be enchanted by evil and the cloud in the top left represents the Witches Sabbath and devil worship.

Shaw’s version – identical in size to Cranach’s – sees Shaw himself replace the woman. A Kashmiri landscape is substituted for Cranach’s Saxon hills and Cranach’s cavorting infants have been displaced by a bubble showing a room in his house which was recently damaged by fire, thus turning the painting into a very personal Allegory of Melancholia of his own. The painting was completed just a few weeks ago and is shown here for the first time.

Simon Groom, Director of the Scottish National Gallery of Modern Art, said: “We are thrilled to be showing Raqib Shaw’s work in Scotland for the first time. The size, complexity, technical accomplishment and audacity of his work are something to behold – some of the pictures have, not surprisingly, taken years to paint. They are absolute visions of delight and awe, and I defy anyone not to lose themselves in the works.”

There are two small dogs which appear in each of his own works, and it is fun to spot them among the intricate and detailed works.

Raqib Shaw: Reinventing the Old Masters will be at the Scottish National Gallery of Modern Art from 19 May until 28 October 2018.