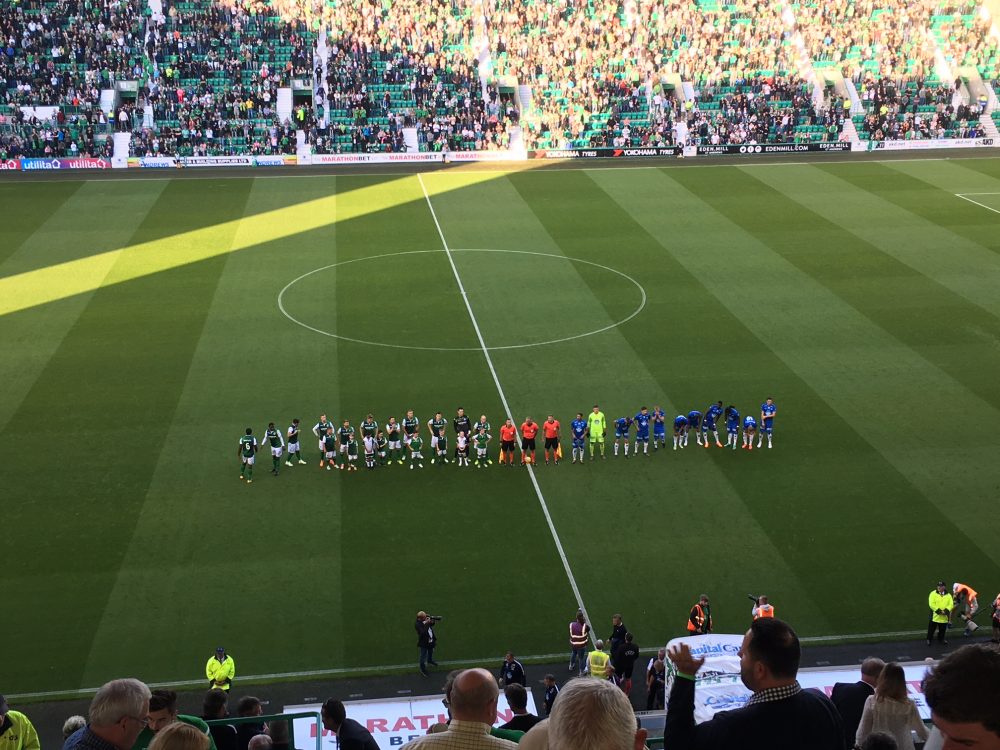 Hibs’ Europa League quest continued with a 0-0 draw against Norwegian side Molde at Easter Road tonight.

The hosts dominated possession and created a number of good chances but were unable to break down the Molde defence during a pulsating 90 minutes of non-stop action.

Neil Lennon made two changes to the starting XI that beat Motherwell in the opening league game of the season on Sunday. Ross Laidlaw replaced the injured Adam Bogdan whilst Vykintas Slivka took over from John McGinn who signed for Aston Villa yesterday.

New on-loan midfielder Emerson Hyndman was listed amongst the substitutes.

Molde were without their star striker, 18-year-old Erling Braut Haaland, son of Alfe Inge who left the team hotel at 4am to travel to Salzburg where he signed for a reported fee of £6m although it is understood that he may be loaned back to Molde for the remainder of the season and could possibly be available or the return leg next week.

Lennon took his place in the dug-out for the first time this season and the Hibs’ fans created a fantastic atmosphere as the game kicked off in the sunshine on Leith.

Hibs started strongly and Efe Ambrose set up Slivka but his shot was blocked for a corner. In the fourth minute Stevie Mallan fired a powerful volley just over the bar then two minutes later another long-range effort rebounded off the crossbar with the Molde goalkeeper Andreas Linde stranded.

The keeper was called into action moments later and did well to save from Slivka as Hibs continued to press forward.

The visitors looked dangerous whenever they attacked however and Paul Hanlon did well to cut out a low cross into the danger area.

Florian Kamberi then did well to latch onto a long ball from David Gray before cutting in from the right wing but his cross/shot went wide of the far post.

In the 20th minute Ambrose took off on one of his customary dribbles before sliding the ball to Mallan who unleashed a tremendous 25-yard drive which Linde did well to save.

Martin Boyle then had the fans on their feet with a great run down the right but his cross was headed clear,

Hibs had a scare in the 24th minute when Ambrose landed heavily on his shoulder after winning a header in the middle of the park. The defender required treatment but was able to continue.

Lewis Stevenson did well to bock a shot from Etzaz Hussain before Mallan produced a sensational piece of skill to make room for a shot which Linde just managed to tip over the bar.

Mallan earned a round of applause for a wonderful 60 yard Crossfield pass to Stevenson then just before the break, Ryan Porteous did well to supply Gray but the full-backs cross was cleared.

The visitors had he better of the early part of he second half and Porteous was booked for pulling Magnus Wolff Eikram’s jersey. Hussain joined him in the book after chopping down Slivka as tackles flew in thick and fast.

Boyle came within inches of giving Hibs the lead but his toe-poke from Slivka’s through ball flew just past the post.

Stevenson then sent a great cross into the box which Stian Gregersen sliced over his own crossbar.

From the resultant corner Gray sent a powerful header toward the bottom corner but Linde produced a world cass save to deny the Hibs’ captain.

At the other end Porteous did well to intercept a cross from the left before finding Mallan with a long pass. The midfielder found Kamberi but the striker’s effort was blocked.

Gregersen was lucky to escape a red-card for chopping down Stevenson but the referee decided that a yellow was sufficient punishment.

In the 66th minute, Kamberi nodded the ball into the path of Boyle but his shot was blocked.

Boyle then claimed fo a penalty after being bundled over by Vegard Forren but the referee was correct to ignore his pleas.

With 12-minutes remaining, Lennon replaced Marvin Bartley and Kamberi with Hyndman and Oli Shaw as Hibs looked to find a goal.

In time added on Stevenson won the ball in midfield and found Hyndman who set up Shaw but the youngster’s back post cross evaded everyone.

In the final minute Mallan’s cross was headed into the path of Hyndman by Gray but the midfielder’s fierce half volley was well saved and he game ended goalless.

Both teams left the field to a standing ovation from the fans and the second leg takes place in Molde next Thursday.