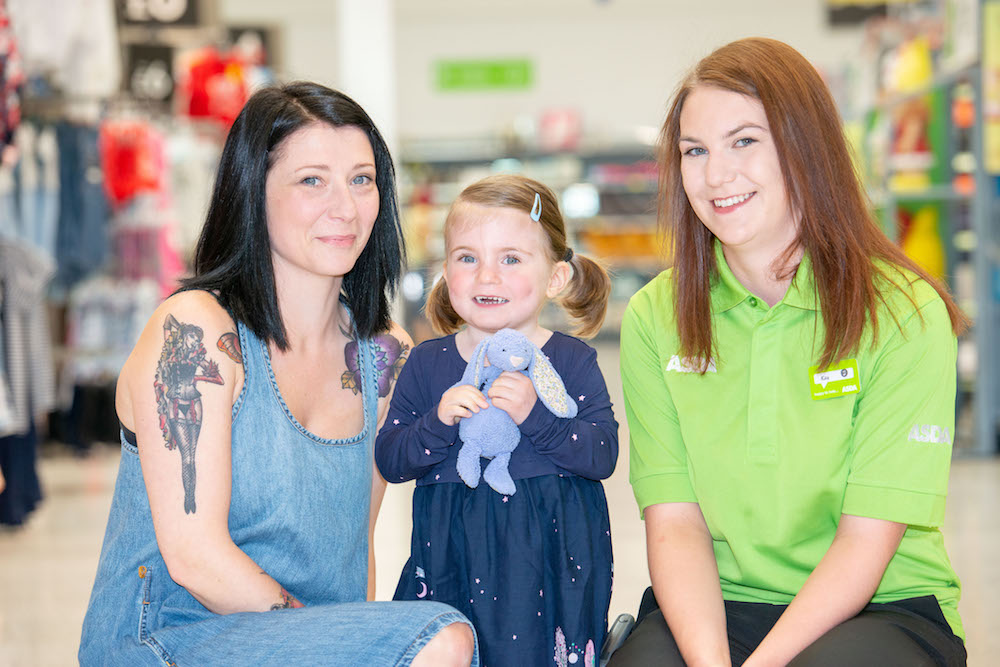 Rhia said: “Violet was absolutely over the moon to get Bunny back. She was so upset when she lost him, so she was very excited when the store called to say he’d been found. Everyone at the store was absolutely amazing.

“We searched for him for a good wee while, but couldn’t find him so we told colleagues and posted an appeal on Facebook.

“We bought her another bunny, and tried to make it look old and worn like the lost one, but she knew it wasn’t the same bunny.”

Kay said: “I got everyone to keep an eye out for Bunny, as it was obvious how special he was to Violet.

“Everyone in the store was talking about him and looking for him, but we just couldn’t find him.

“To be honest we were starting to lose hope, because she lost him in early May. Then, six weeks later, I came back to the store to a note from Sue saying she had found him.

“It was fantastic to see how happy Violet was to get him back. We put him back inside a Wellington boot and got her to pull him out – she was well impressed!”

Sue, who’s the store’s George section leader, said: “Kay had asked us to look everywhere for this bunny – and we really did look everywhere, but we just couldn’t find him.

“Then we were doing a display change. I was moving the kids’ shoes and some of the kids’ Wellington boots fell on the floor, and Bunny fell out.

“I’m so glad Violet has been reunited with him.”

Bunny’s been with Violet ever since she was in an incubator and was bought for her by Rhia’s sister Jessica.

Rhia, who lives in Leith with her partner Danny MacIntosh, Violet and her sister Isabella, said: “She was critical a few times. She got an infection which led to sepsis; her lungs were failing and she had to be given very strong ventilation to stretch her lungs. She also had lots of blood transfusions.

“She had a very hairy four months at Simpson Neonatal Unit in Edinburgh. The doctors and nurses there were heroes. They worked their magic, and she came home.

“Last year she was basically given the all-clear – she’s a miracle baby. She’s a very strong-willed character, loves climbing and runs everywhere!”