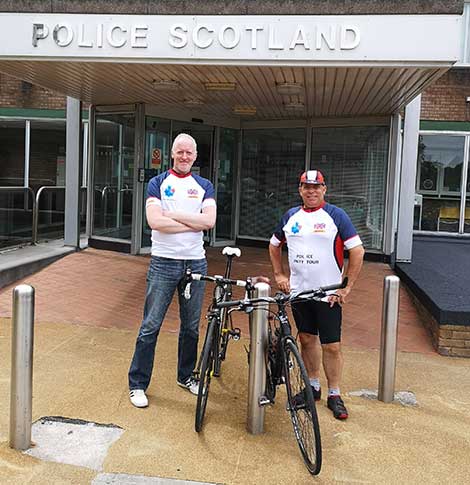 Two members of Police Scotland staff will be embarking on a 230-mile cycle from Gretna to the National Memorial Arboretum in Stafford as part of the Police Unity Tour.

The pair, Security Officer Martin Burnett (56) and Mike Quinn (49) from the ICT team will be raising money for the Care of Police Survivors, which supports the families of officers killed on duty.

The Police Unity Tour was started in 1997 in New Jersey, USA, to raise awareness for officers killed in the line of duty, honour their sacrafices and raise funds for their families.

Now, twenty years on, police personnel from across the world participate in bike challenges as part of the Police Unity Tour.

For Martin and Mike, who are based at Fettes Police Station in Edinburgh, endurance cycling is no new endeavour.

Both have previously undertaken Unity Tour rides, as well as other long-distance journeys.

Mike said: “Last year was my first ride on the Unity Tour and I had the honour of riding in memory of PC George Taylor. George was murdered by two prisoners that had escaped from Carstairs on 30 November 1976 and was survived by his wife and four children.

“Last year’s tour was tough at times but during those times I would look down at the band I was carrying, this would remind me why I was doing this and I would mutter to myself the words of pro-cyclist Jens Voigt “Shut up legs”.

“It was a great honour to meet with two of George’s children, as it helped drive home what COPS and the funds they raise really means to the families and how much comfort and support it gives. I will again be riding this year’s tour in memory of George.”

Martin Burnett has been with the police for 24-years and in 2016 he participated in the Rome to Home challenge for the war veteran’s charity, Erskine’s, having previously served in the 1st Battalion, The Royal Scots over 30-years ago.

After finishing the 1,500-mile trip from the iconic Coloseum through Europe and back to Britain, Martin and his long-time friend Willie Malloy raised over £3,000.

Despite recently undergoing painful surgery on his mouth, Martin remains determined to raise as much as he can for a fallen officer, who died on duty in 1987.

He said: “I’m honoured to be cycling in memory for Callander-based policeman Sergeant Harry Lawrie, who died in a helicopter crash on Ben More while on a call with Killin Mountain Rescue Team, where he was coordinator.

“I know COPS is a wonderful charity and I’m proud to be raising funds for them.”For Mike, who has been with the police for 12-years, preparing for this challenge has been a lot more straight-forward and he recently returned from training in the Netherlands. However, he recalls one cycle journey where it was not only the elements that he had to contest with.

He said: “I was out cycling in Midlothian with my mate I passed what I thought was road kill. Turns out it was just a stunned baby buzzard and it lunged for me as I passed, which then put it in the line of my mate behind, thankfully he managed to dodge it.

“A motorist travelling the other way then stopped, grabbed a blanket and huckled the buzzard into the car with the promise to take it to the vet.

“I always wondered what ever did happen to that bird…”

Martin was also keen to point out that even the most seasoned of cyclists, on occassions, deal with some difficult circumstances.

He added: “Once while riding in Wester Ross, a friend and I had been tackling a few mountains and steep gradients as part of the route. We thought we’d done them all until we reached Apple Cross and it was a sheer drop.

“My friend managed to quickly change gear to compensate, but I wasn’t so lucky.

“I ended up going down backwards before falling off!

“Luckily I can laugh about it now.”