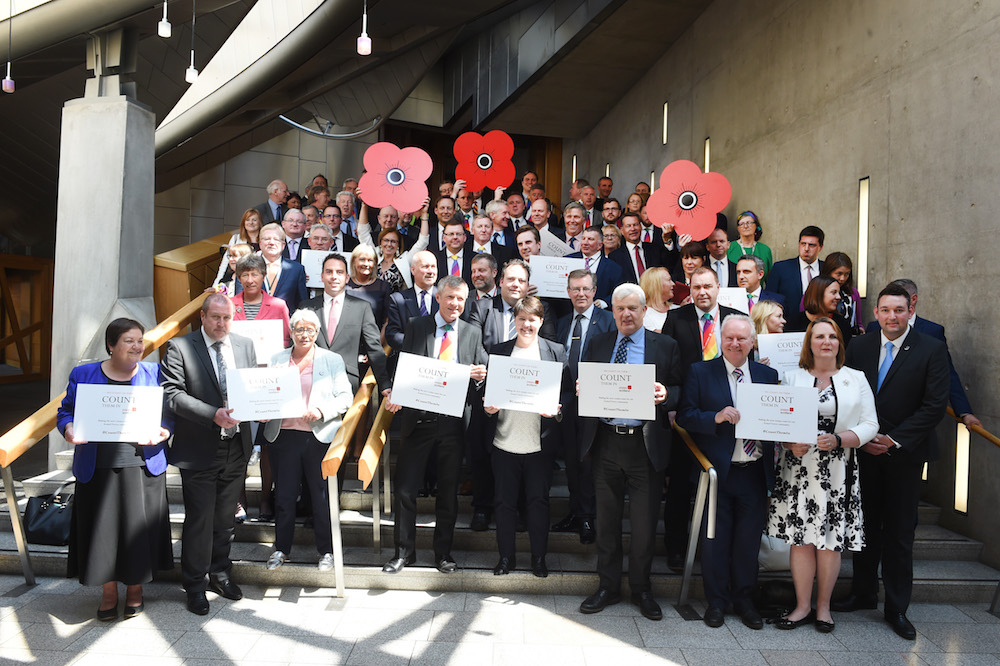 MSPs gathered at the Scottish Parliament today (Thursday) to show support for Poppyscotland’s ‘Count Them In’ campaign. By highlighting the knowledge gap that is created by relevant questions not being included in the Census, the campaign seeks to identify where members of the Armed Forces community in Scotland live, and the issues they face, in order to tailor services accordingly.

Leading the call on the Garden Lobby Steps were MSPs Maurice Corry and Jackie Baillie, who serve as Convenor and Deputy Convenor respectively of the Armed Forces and Veterans Cross-party Group. The event to support Count Them In received strong cross-party support, including from the leaders of all the main Holyrood parties and more than half of all MSPs. Also in attendance was Poppyscotland’s Chief Executive, Mark Bibbey.

Mr Corry MSP said: “More and more local authorities are now seeking to incorporate information on those in the Armed Forces and veterans community in order to accurately deliver the services that they require, having served their country. I commend Poppyscotland’s campaign to have questions about the Armed Forces community included in the 2021 Census and fully believe such a campaign should be supported by all in order to enable the best services to be delivered to our veterans throughout the country.”

Ms Baillie said: “I am delighted to support Poppyscotland and The Royal British Legion’s campaign. Our country’s Servicemen and Servicewomen have done so much for us, so it is incredibly important that they are counted in official statistics. If we really want to be able to provide the help and support that the Armed Forces community needs then we should know where they live and what their needs may be. The photocall at the Scottish Parliament will allow politicians from across all parties to show their support for the campaign and for our service men and women.”

Mr Bibbey added: “Poppyscotland is delighted to have received great support among MSPs including party leaders today to add to the support for our Count Them In campaign already received from seven local authorities and a majority of MPs.

To date, the Count Them In campaign has been supported by a majority of Scottish MPs, while seven local authorities – Aberdeen, Borders, Moray, West Dunbartonshire, South Ayrshire, East Ayrshire and South Lanarkshire – have pledged their support to date.