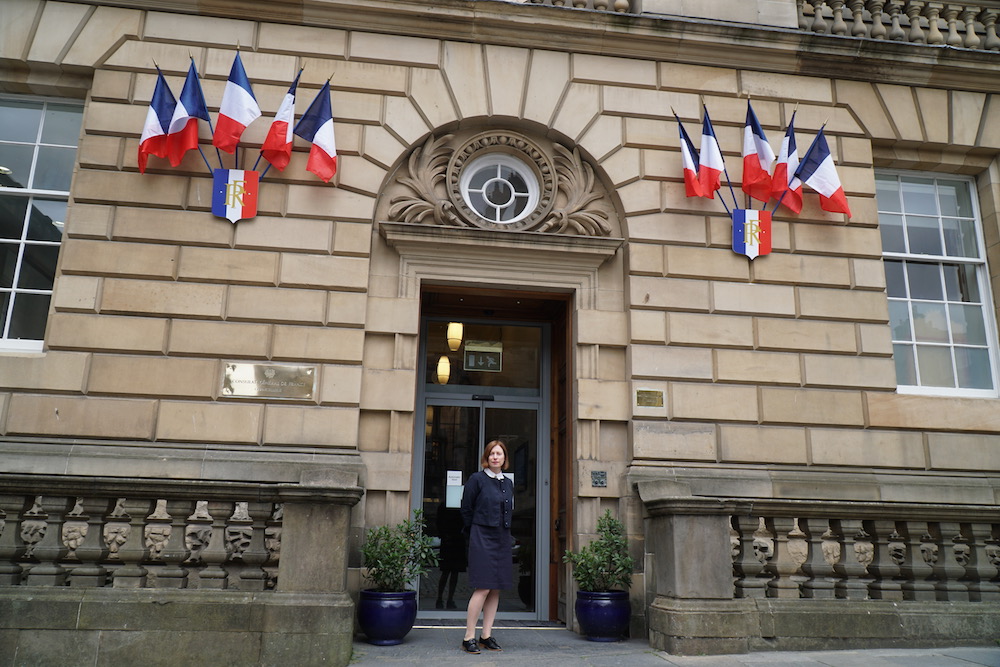 Sorcha Carey is Director of Edinburgh Art Festival and when we met she only had two chairs in her new meeting room at the French Consulate. All the other furniture and the contents of their old office was about to be delivered the next day but she assured me they will definitely be in the swing of it by the time the festival starts at the end of July.

The festival this year features around 50 exhibitions across 30 or more venues. There is something happening every day of the week, with a great programme for children and young people.

In this new space the information kiosk will be in the foyer opening onto Parliament Square. The kiosk has popped up in the last few years to give you information about this largely free festival which takes place across the capital between 26 July and 26 August 2018.

Carey is excited about the move as she thinks that it puts the EAF at the ‘heart of Festival geography’.

This is perhaps one of the smallest teams at any festival in the city, with a small core of three full time and one part-time members of staff. They work hard all year collating and curating work by artists both well known and those just beginning their careers. It is a staff which is then supplemented by around five more during the festival. Crucially, during August the kiosk is manned by a large team of volunteers. They give information on the programme and Carey says they are a ‘critical interface’.

The new code introduced by the council to govern the use of volunteers in any of the city’s festivals is not a huge concern to the EAFm who say they already adhere to the principles of it.

Sorcha explained that many of the volunteers return each year which has to be the best verdict on the experience that they enjoy during the festival.

Effusive on the move to the Old Town, she continued : “This little corner of La Republique Francaise is right in the heart of the city at the corner of The Royal Mile and George IV Bridge.

“We are very excited that there will be two elements of our art festival programme here, with our kiosk, the central information point for the festival and also work by Adam Lewis Jacob.”

You will be able to get information at the kiosk from the volunteers and also pick up written materials about the various things to go and see. And importantly you can buy the EAF bag (and rather good quality it is too).

There is a map of the exhibitions available to guide you round at least some of them, with a list of everything you can see on the reverse.

Adam Lewis Jacob is a Glasgow-based artist and his work was shown at Collective last year in a one person presentation. He studied in Bournemouth, Los Angeles and then at Glasgow School of Art. No Easy Answers to be shown at the French Consulate building is a new commission in a special project space in the fabulous building which was once home to the council.

The COMMISSIONS programme will be laid out over several different sites in Edinburgh.

Sorcha explained that you might start at The French Consulate to see the work by Adam Lewis Jacob. “Then you would go out onto George IV Bridge and walk along to the former Fire Museum on Lauriston Place. There you would encounter an extraordinary sound installation by an Indian artist, Shilpa Gupta. You might then nip down through the Grassmarket and up the steep steps to pop in to Johnston Terrace. We opened this up last year with the wonderful Palm House by Bobby Niven. We are reopening that very secret Geddes garden on the Patrick Geddes steps for the festival this year.

“Here you will find a whole range of free activity but also magic performances which have been devised by the artist Ruth Ewan. Sympathetic Magick has been devised in collaboration with magicians here in Edinburgh and elsewhere in the UK. They will be popping up across the city as part of the Commissions programme.

”It started with a magician from London called Ian Saville who describes himself as a Marxist magician. He aims to make capitalism disappear, using his magic to talk about his personal convictions.

“One of the things about EAF is that it introduces people to art in all its possible forms.”

There is the familiar and the unfamiliar with a sound installation by Shilpa Gupta For in your tongue I cannot hide : 100 Jailed Poets which Sorcha describes as a ‘technical feat’. There is poetry involved and it is all about freedom of speech and expression, asking all of us to engage with words that others have tried to suppress.

Sorcha went on : “Walking into the former fire museum on Lauriston – that amazing old fire station – you will hear voices speaking poetry in English and original languages from all over the world. A voice will speak an extract of poetry and then a chorus of 99 voices will repeat that extract. This has been recorded and the artist has edited it into a sound experience. It will have a real spatial quality to it. The sound will move through time and the space.

“To attempt to realise this installation is a huge challenge.”

But continuing on our journey….

“You would then walk down the Royal Mile to Trinity Apse which is one of the buildings we have been opening up every year during the festival. There you will find the work of Ross Birrell and David Harding. They are making a wonderful film installation called Triptych that will be installed in that historic building.

“Trinity Apse is a space that artists are very drawn to and always want to work in. This year the two Glasgow artists will show this specially edited film of a performance made in Athens by the Athenian State Orchestra collaborating with the Syrian ex-pat Orchestra which brings together Syrian musicians who are living in exile from their own country, principally across Europe and they came together in a special performance last year to make this amazing performance of Symphony of Sorrowful Songs. So this is a beautiful film and there will be a colour installation using colour vinyls over the amazing windows of the remnants of the historic 15th century Kirk.”

i asked Sorcha who the art festival is really for, since we have such a range of art galleries here anyway. She replied emphatically: “Edinburgh Art Festival is for everyone, and it is an absolute celebration of the visual arts. As you say we have art galleries here all year round, but the Art Festival has been born directly out of that really rich visual culture and that real celebration that exists here all year round.

”The galleries in the capital came together fifteen editions ago to found a festival. In 2004 the city’s galleries came together to found a festival because they wanted to ensure that the experience of Edinburgh’s festivals included a really strong showcase for the visual arts alongside the other art forms that are celebrated in our city in August.

”One of the great things about our festival programme is that it is predominantly free at point of access. Over 90% of what we do is completely free. Although the festival continues to grow each year, we are really proud of the fact that we are really ther for everyone and trying to make visual art as accessible as possible.

”I think there’s a real opportunity to make extraordinary journeys and leaps of experience through the breadth and range of the festival programme with everything from the Old Masters like Canaletto and Rembrandt right through to contemporary cutting edge art practice.”

Edinburgh Art Festival was founded in 2004. In its 15th year the festival combines the works already hanging in the city’s art galleries and museums with specially commissioned art. This celebration of the best in visual art features both established and emerging artists. Last year 315,000 visitors included this festival in what they went to see. EAF is a registered charity supported by Creative Scotland and The City of Edinburgh Council.