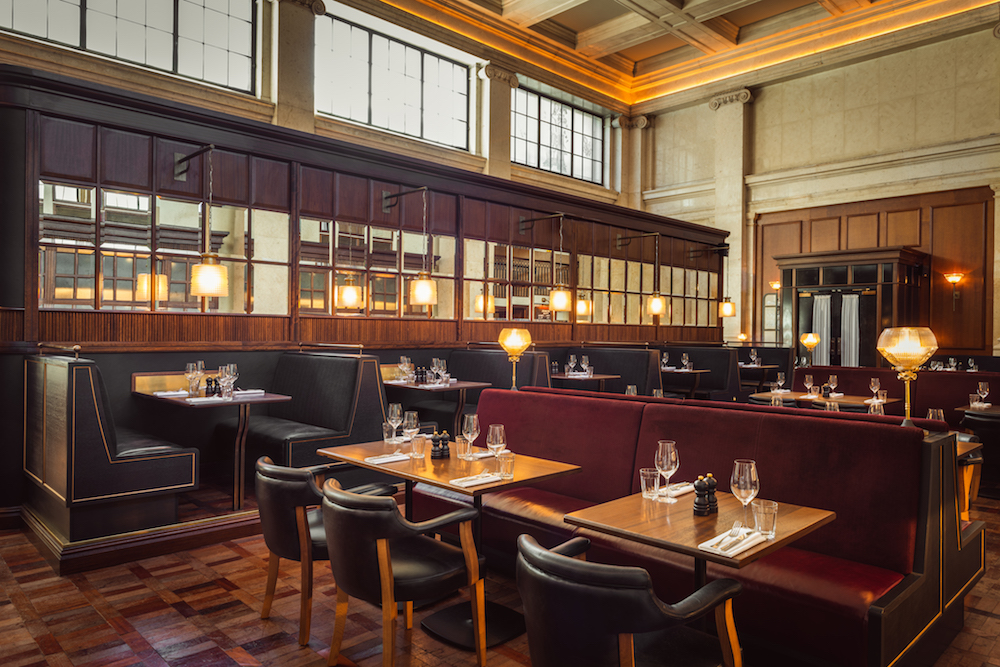 Doors are now officially open at Hawksmoor – the 185 cover steak and seafood restaurant from Will Beckett and Huw Gott. Situated within the grand Art Deco banking hall on St Andrew Square, with a locally inspired menu and unique interior, and following a massively oversubscribed soft launch, it’s now ready to add to Edinburgh’s thriving bar and restaurant scene.

Hawksmoor is among the UK’s best known restaurants, with a reputation for sustainability, ethical sourcing and being a great company to work for (having been listed as one of the best 100 places to work in the UK in the Sunday Times’ Best Companies list for seven years running). With its simple ethos of sourcing the best possible ingredients and providing great hospitality from people who love what they do, Hawksmoor is hoping to become a much loved Edinburgh institution.

The Editor writes : “The restaurant is certainly starting out on the right foot. Although the entrance is round the side of the building next to a building site, once you are inside it is a lofty space with comfortable booths and seating. The steaks we ate were just the best we have tasted, and the triple cooked chips were hot and crispy just as they should be. With attentive, but discreet staff this is a place we will return to, especially as we could not sample the dessert menu. We will be better prepared next time! “

The Hawksmoor team has worked with interior architecture and design studio Macaulay Sinclair to create an interior befitting its special location. The Category A-listed ‘Building of National Importance’ was originally built in the 1930s for the National Bank of Scotland and has been closed off to the public for decades. The restaurant also has an exclusive private dining room named after Glasgow born Sadie McLellan, said to have been one of the most important Scottish artists of the 20th Century, who in 1942 designed the series of etched glass windows celebrating the traditional pillars of Scottish industry that surround the restaurant. The team has meticulously sourced reclaimed materials and vintage furniture to create a warm lived-in feel.  Tables have been made from reclaimed science labtops from elite public schools. Doors have been repurposed from the original building with reclaimed brass ironmongery. Bespoke light fittings have been made with original Holophane glass sourced from a Dutch Art Deco hotel, a French aerodrome and an automobile factory in Indiana.

New additions have been made with materials from the same era; panelling from a grand Glaswegian townhouse has been used to create the curved bar in the centre of the space, and mahogany radiator covers from the British Museum form part of the kitchen pass. Other finds include teak parquet flooring from a Blackpool ballroom and a reception desk from a town hall in Northumbria.

At its heart, Hawksmoor is about produce.  Ever since the first restaurant opened in 2006 the guiding philosophy has been to buy the best and prepare it as simply as possible.  In Edinburgh, Hawksmoor will draw on the amazing produce the country has to offer, featuring beef from grass-fed native breed cattle from both sides of the border and seafood from around the Scottish coast. The team has searched far and wide for exceptional produce, like  Iain Mackay’s Highland beef and hand-dived scallops from Ethical Shellfish, both of which they found on the Isle of Mull during one of their supplier trips around Scotland, and sourdough bread from Edinburgh’s own Twelve Triangles.

Alongside Hawksmoor classics, like their dictionary-thick steaks, Old spot belly ribs, Hand-dived scallops with white port & garlic and Charcoal-grilled monkfish, new dishes include Cast iron fillet steak with bone marrow skirlie, Hebridean lamb T-bones with pea, mint & haggis salad from a pedigree flock in the Highlands, and, amongst the desserts, Scottish raspberries, Knockraich crème fraiche and a homemade hobnob. The drinks list features a number of beers from small Scottish breweries, an extensive whisky selection and new cocktails including Summerhall Club, made with Pickering’s gin, honey from hives on the distillery roof, raspberries from Fife and a dash of Edinburgh brewed Sweet Dram Escubac

Will Beckett said, “It’s great to be opening our doors in one of our favourite cities. We’ve always said we want to open restaurants in places we love to spend time, and Edinburgh is an amazing place to do that. The site is incredible and we have invested a huge amount of time and effort trying to be respectful of the building and the city to create something that truly belongs. We can’t wait to welcome the people of Edinburgh back into the room to have a good time at Hawksmoor.”