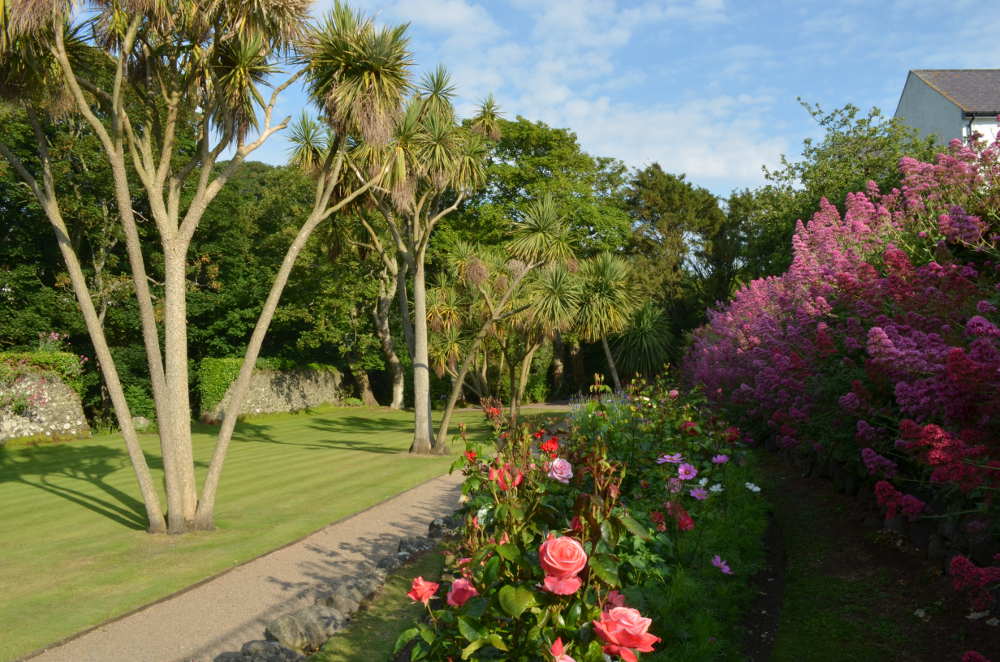 The biggest compliment I can possibly pay to The Ballygally Castle Hotel is that I felt at home.

I will also always remember wakening with the sun filling the room with the sound of the waves gently lapping the seashore of the magnificent beach opposite. It was so tempting I went for an early-morning stroll and loved it.

The Ballygally Castle is one of the ten featured in the Discover the Doors Trail which was sparked by the Game of Thrones series which brings visitors to the hotel from all over the world.

The hotel is also known for its ghost. Don’t let that put you off, we didn’t even feel a slight presence. I slept well and there were no bumps in the night that I heard.

Well it took me 2hr 40min to drive from Edinburgh to Cairnryan to pick up the P&O Ferry.

A relaxing two-hour crossing was followed by a 15 minute drive along the stunning Antrim Coast and we were there.

Norman McBride, the general manager, has a host of packages to suit, including a Game of Thrones tour and also a themed afternoon tea, a coastal escape with dinner, bed and breakfast, and “blissful” breaks.

The hotel is on the tip of the Causeway Coastal Route and is a 17th-century castle which overlooks golden sands in Ballygally Bay, with an interrupted view across the Irish Sea.

It is also ideally located for a number of tourist attractions like Bushmills Distillery, Carrickfergus Castle, Carrick-a-Rede rope bridge and the world-famous Giant’s Causeway.

Other leisure activities nearby include golf and Royal Portrush, home for the 2019 Open, is around an hour away. Incidentally, the hotel was fully-booked within a week of the Open golf confirmation.

There are also walks in the Carnfunnock Country Park and the hotel has manicured gardens far from the madding crowd if you want to sit in the shade with a book.

Rooms are tastefully decorated. Some have original beamed ceilings and mine was sizeable with the added attraction of the sea view.

The Garden Restaurant – with beams – is relaxing and it boasts an extensive menu which is reasonably priced.

The are passionate about using local produce and it is sourced if possible with the dinner menu offering something to suit most tastes.

Salt and chilli scampi was served with Napa slaw and the sharp chilli taste blended beautifully with the fish.

I had to try the seasonal soup of the day despite the soaring temperatures and it was like your granny made. That’s a compliment.

It was served with a Hastings (the hotel is part of a chain) wheaten scone and, for me, it didn’t work. A home-made roll would have sufficed.

I could not resist staying traditional and my slow-braised short rib of Northern Irish beef fell away in my fork.

It was served with spring onion mash (so good I’m going to make this standard at home), squash and baby carrots in a red wine jus. I didn’t feel that the champagne caramelised shallots, however, lived up to expectation and the bitter taste, for me, detracted from the red wine jus.

On to the sweet. Sticky toffee pudding was a dream as was the Bramley apple and salted caramel sponge. I had mine with luscious sorbet (raspberry).

Is it any doubt I slept well?

Breakfast boasts many of the best from Northern Ireland’s seasonal larder.

Grant’s dry cured bacon was just how I like it and the Carnbrooke honey bee (with a hint of Mourne Heather Honey) sausages made from 100 per cent Irish pork were also packed with flavour.

Free range scrambled egg was offered along with award-winning Gracehill black and white pudding, both cooked to a T, the white being particularly impressive.

Kippers or cod and Eggs Benedict are also available but at an added cost of £3 and there are vegetarian options.

Ballygally pride themselves in their field to fork delivery and also popular are White’s Irish porridge oats from County Armagh. What I found unusual was the offer of Bushmills Irish Whiskey as a potential topping.

Too much for me, but the booklet describing the products and where they are from is a fantastic touch and it includes a section on Irwin’s wholegrain Guinness bread.

Yes, I felt at home here and congratulations to Norman and his staff. A sign as we left the village said: “Histe ye back.” I’d love to. 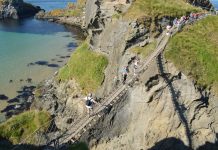