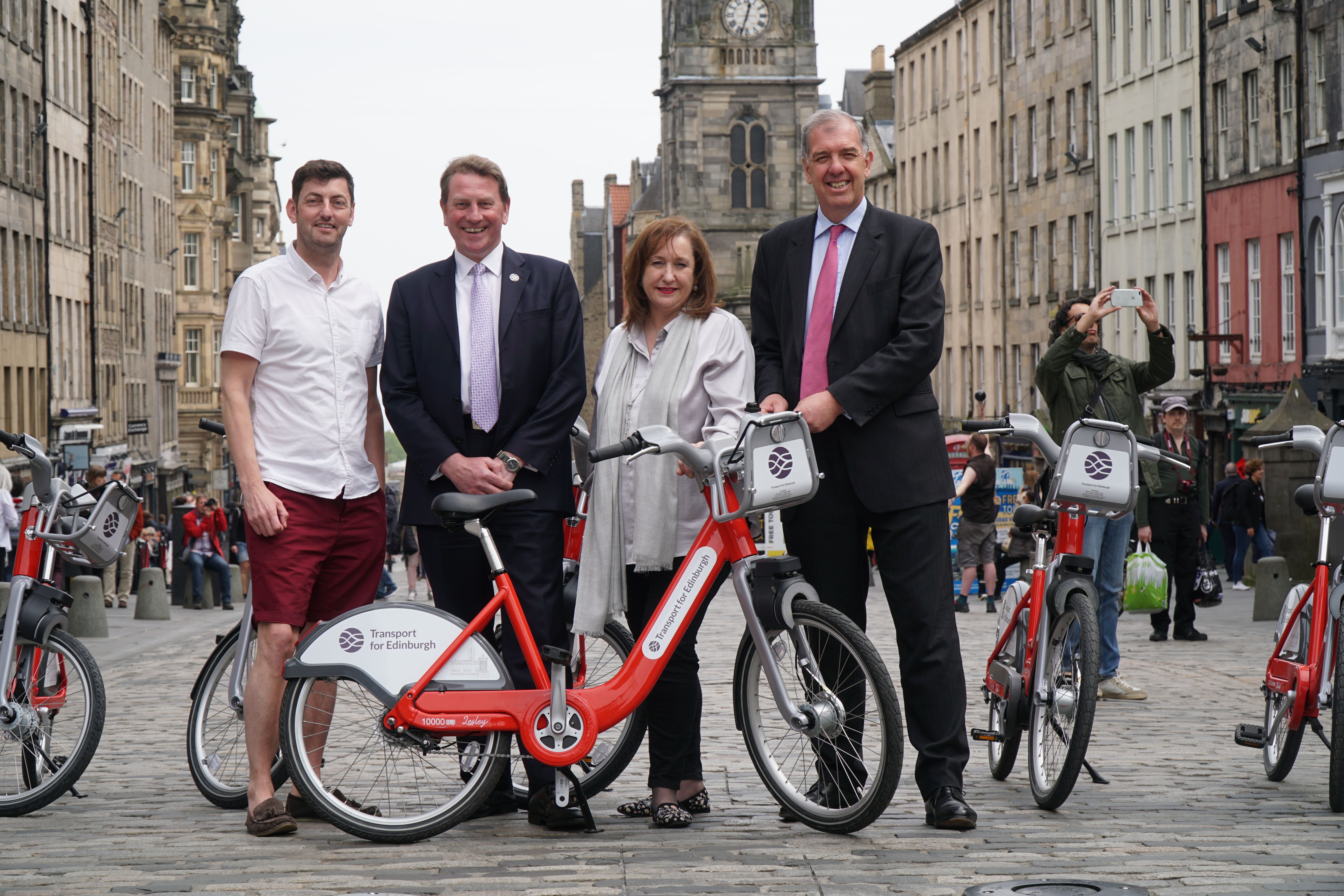 When the Transport for Edinburgh bikes are introduced in the autumn, they will not be red.

You might be forgiven for thinking they would be a bright red (as I did) since all the bikes used at the recent photo call, when councillors and representatives from all organisations involved cycled them up and down the Royal Mile, were red. But no. They will be blue.

Why? It appears to be a matter of some concern about the red clashing with logos and colours of any potential sponsor as well as a doffing of the corporate cap to the capital’s World Heritage status. Serco who are running the scheme for TfE have offered to build the bikes in one of  two colours : red and what is called cobalt blue.

Following some discussion with Edinburgh World Heritage a decision has been made that the bikes will be blue. I spoke to Adam Wilkinson Director of Edinburgh World Heritage, who confirmed that he was consulted on the matter. He said : “I simply agreed with the Transport Convener, Lesley Macinnes that blue might work with Edinburgh’s generally muted streetscape palette and that accorded with her view.”  But he does not take any credit for the colour swap in the first place.

That seems to fall largely at Serco’s door, as they are in charge of getting the major sponsor for the bike hire scheme in place. Sponsorship is an important component of the contract which they have entered into with the council to deliver the bikes to us in Edinburgh. Transport Convener Lesley Macinnes told us :  “I think blue works better in a World Heritage site. It reflects the environment in which these bikes will be seen and used, and we hope this choice will be welcomed by everyone.”

Red is a colour often used by The City of Edinburgh Council but according to Chief Executive of TfE, George Lowder, there is no ‘official’ colour for the city.

We know that there is a red and black City of Edinburgh tartan though, which Kinloch Anderson sell and which we have noticed some councillors and city officers wearing on occasions. It was created in 1997 to mark the Commonwealth Heads of Government meeting hosted by The City of Edinburgh Council, although it has to be said there are other tartans with Edinburgh in their name which use different colours.

Mr Lowder continued  : “We did cast around for a city colour, but there is no formal recognition of one. The demonstrator bikes were provided in Serco’s own shade of red, but it is felt that a more muted colour will be easier to match up with a potential sponsor’s requirements.” No sponsor has yet been named.

I asked Mr Lowder to confirm however that the bikes will look much the same as they did at the recent photo call, and he said that, subject to further refinements on the electric version, the bikes will resemble very closely those on show.

We have endless video footage and photos of red bikes, but sadly this is not what the Edinburgh city hire bikes will actually look like when they are launched in September in time for the beginning of the academic year.

Instead, look out for the cobalt blue bikes…which we will film when they get here.

In Dublin the bikes are a turquoise reflecting a version of the city council colours.

They are supported by Just Eat in a three year agreement signed last summer. The bikes, the docking station screens, service vehicles, staff uniforms are all branded with the online food delivery service logo. Since it was introduced in 2009 the Dublin Bikes scheme has had several sponsors including Coca Cola from 2014-2017, and almost 20 million journeys have been made by bike.

The scheme is run in conjunction with JC Decaux Ireland who operate 52,000 bikes in 88 cities and 13 countries. Our city council in Edinburgh has a relationship with JC Decaux who provide advertising, but they do not seem to have had any part in the bike share scheme which is about to be introduced. If you are very partial to a red bike then you will have to go to Washington DC where they have the Capital Bikeshare scheme offering you red bikes to cycle all the way out of the city centre as far as Mount Vernon or Georgetown and back. In common with Edinburgh there is a good network of off-road trails. There are 4,300 bikes at 500+ stations around the metro DC area and a 24 hour pass costs $8.  It is a great way to get to all the museums in the city without exhausting yourself by the time you get there. They have now reached a milestone with 20 million plus rides which equates to 42,21,980 miles!

The bikes in London are red perhaps to reflect the sponsor, Santander. The cycles used there are the same as we expect to get in Edinburgh. They are made by Pashley, Britain’s longest established cycle manufacturer who have been hand-building bikes for 90 years.  The contract between Transport for London and Serco was renewed in August last year with a total contract value estimated at £79.7 million.

In Paris the vélib  is a rather dull grey colour, but the bikes there have become quite futuristic as they have a V-Box on each one allowing you to use a contactless credit or debit card to hire the bike. They also have a management system which works out where the bikes are and how many empty spaces there are. If you get to a docking station where it is full then you have a Park + option allowing you to attach a bicycle the other way round in between two already in the dock. This keeps the area around the docking station as clear as possible.