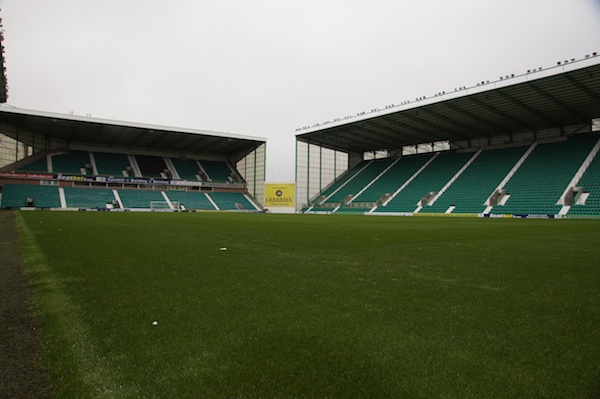 Easter Road’s playing surface has been voted second best in the top flight, behind Fir Park in a survey conducted by PFA Scotland, the Scottish FA and Sports Labs.

Throughout the season, players from all 42 SPFL sides rated each surface post-match with a score of one to five on an app called ‘Pitch Rater’.

Hearts’ Tynecastle pitch which was criticised by Celtic manager Brendan Rodgers who said he was ’embarrassed’ by the length of the grass was voted the worst natural playing surface in the top division.

Off the back of the PitchRater study, PFA Scotland, Sports Labs and the Scottish FA will sit down with relevant parties, including groundsmen, to go over the results in more depth and come up with a list of recommendations going forward to improve, and maintain, the condition of pitches across all SPFL clubs.

Fraser Wishart, Chief Executive of PFA Scotland, said: Too often players’ views are overlooked within football. In this case alterations are made to pitches and different surfaces laid without any thought of, or consultation with, our members.

“It is often forgotten that the pitch is our members’ place of work and for that reason we are delighted to partner in this groundbreaking research with Sports Labs and the Scottish FA.

“Players are the ones with the intimate knowledge of how a pitch plays, how it feels underfoot and what type of football has to be played therefore it makes perfect sense to ask them for their views.

“Our feedback also shows players also care about the product on show for fans paying at the gate and the image poor surfaces portray for Scottish football in the wider media. The results of our survey must be considered carefully by decision makers and used to help improve the quality of surfaces in Scotland.”

Eric O’Donnell, Managing Director at Sports Labs, said: “It is very rewarding and encouraging to see that in its first season the PitchRater© app has been such a great success. Sports Labs is confident its commitment to this project and the player feedback it generates will add to our understanding of what makes a good field for the players – one that can be directly linked to nurturing and advancing pitch improvements.

“The contributions of PFA Scotland and the Scottish FA in making this study possible have been invaluable and the data collected will undoubtedly drive improvements on fields throughout Scotland with safety as one of our core values.

“The Scottish Artificial and Turfgrass Seminar will be held in September where more indepth results from the Player Perception app will be released, reviewed and discussed by a panel of turf consultants from some of the world’s most prestigious stadiums.

“We would like to thank the players who enthusiastically contributed to the success of our project. It was a superb decision to place player perceptions at the forefront of pitch analysis. Fundamentally, we recognise a game is only as good as the surface it is played on.”

“Pitch quality in the professional game in Scotland is an important issue, whether that be from the perspectives of player safety or the attractiveness of the game as presented via televised matches.

“The level of engagement, number of responses and overall commitment to the study over its duration are clear evidence of how importantly players view this area. Such a response has in turn provided a level of data and then subsequent results which are as insightful as they are significant.

“In that regard, it is little surprise that both FIFA and UEFA have shown great interest in the work being done here in Scotland. This is evidenced by FIFA providing a small development grant to assist partners with the design and build of the PitchRater App that was used to collect responses.

“And UEFA, who are currently considering implementation of a quality standard for natural grass pitches in their highest level competitions, view the project as something they, and a number of other European national associations, want to look into further regarding a potential roll-out and also to help them with their current aspirations to see a natural grass quality standard realised.

“It’s great for Scotland to be seen as a pioneer in this area and in that respect, both ourselves and Sports Labs are extremely grateful to PFA Scotland, without whom we simply wouldn’t have reached the number of players and in turn responses that gives the study its validity.”