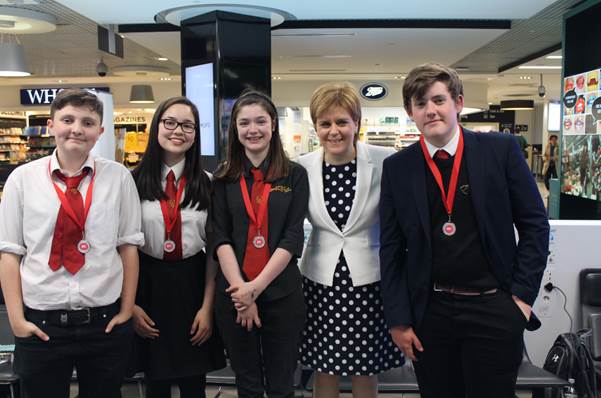 Broughton High School has had great success recently with their young debating team.  There are about 18 core speakers involved and Broughton’s debaters have honed their rhetorical skills in many competitions, including finals within Westminster House of Parliament and 10 Downing Street.

They recently won the Scottish Cup in Glasgow – run by Debate Mate in The Royal Faculty of Procurators – then the team went on to compete in London.  They had earlier taken part  in the Debate Mate Urban Debating League, which meant that Broughton High School was ranked #1 in Scotland and #10 nationally (out of 250 competing schools).

The top 16 schools on the league table then entered the finals held in The House of Lords, Westminster, London.   Broughton High, after a series of successful debates, rose up the table to finish in third place overall.

Bronze medals and a meeting with Nicola Sturgeon, First Minister of Scotland, were a fitting culmination to reward debaters Odhran Thomson, Isabella Walsh, Josie Law and Kevin Kane for their strong placement – representing both Broughton High School and Scotland.