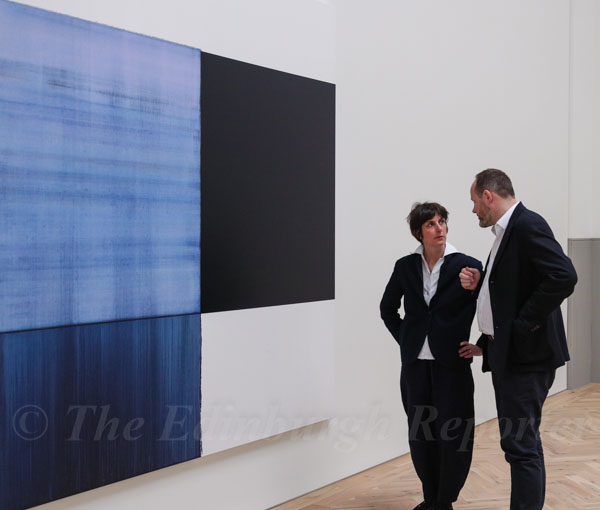 ‘This place is of this place.’ (Frances Ingleby)

Thirty years ago, Florence Ingleby was working with the author Candia McWilliam (daughter of the late architectural historian Colin McWilliam), when the BBC asked Candia to name a building that was important to her.

She chose the Glasite Meeting House in Barony Street. Together – on Florence’s first trip to Edinburgh – Florence and Candia visited this simple, austere building, designed for the followers of John Glas in 1834. Thirty years have passed; Florence is still here in Edinburgh, and this week she and her husband Richard (above) opened the third incarnation of their Ingleby Gallery in that very same building. The new Ingleby Gallery preserves the Meeting House’s magnificent beauty while giving it new life as a contemporary gallery for the work of world class artists, designers and craftspeople. And in the process of restoration (the main hall had lain empty since 1989) the Inglebys discovered something both beautiful and mysterious.

A breakaway group from the Church of Scotland, the Glasites (‘Sandemanians’ in England and America, named after Glas’s evangelical son-in-law Robert) opened their first meeting house in Edinburgh in 1734. They eventually bought the Barony Street plot from the Heriot Trust and commissioned architect Alexander Black to design a new building. Their specifications were as strict as their beliefs; everything was to be of the highest quality, and the windows were to be fitted with brown glass or filled with ‘Arbroath pavement’; they did not want to be overlooked. Pews in the chapel were to be narrow; Glasites did not believe in kneeling, but instead to ‘opening themselves to God’ by turning their faces to heaven and spreading their arms wide.

Glasite services were extremely long, lasting from 11am to 4pm on Sundays. Although everyone, adult or child, was expected to last the course, even Glasites acknowledged the need for a break – so upstairs they went, mid-service, to the beautiful Feast Room, where the poles upon which the elders hung their top hats before eating are still in place. The resident housekeeper served up a lunch that inevitably began with her famous kale soup; so popular was this that the Glasites became known as the ‘kale kirk’. Only elders of the church were allowed upstairs; children and visitors dined in the kitchen. Having acquired the building, the Inglebys worked with Helen Lucas Architects, the Scottish Historic Buildings Trust and Edinburgh World Heritage to return it to its former glory. Out went the ancient carpets, off came the old paint. They wanted to turn the rectangular chapel into a perfect cube, and did so by removing the huge pulpit and most of the pews, then adding false walls to the sides (particularly useful since the building’s listed status meant they couldn’t throw anything away – now everything could be safely stored).

The main glass-domed hall is now a stunning space, as plain and and restrained as the Glasites themselves, and a superb backdrop for the Inglebys’ inaugural exhibition Byzantine Blue, Delft Blue, Paris Blue by Callum Innes.

Innes, who took part in the Ingleby Gallery’s first show in 1998, presents a series of large-scale ‘Exposed Paintings’ exploring the possibilities of the colour blue. He layers colour and pigment, then gradually removes it to leave the remnants of each stratum, balancing the controlled hand of the artist with the potential chaos of chance;

‘(my works) are all quite different from one another, though the language remains the same. The paintings should retain a sort of human fragility about them.’ The Feast Room, together with other smaller rooms in what is still essentially a domestic space, is hosting Twenty, an exhibition showcasing the work of key artists associated with the Ingleby Gallery since its inception. Specially commissioned ceramics by Olivia Fiddes and bespoke furniture by designer and cabinet maker Alastair Letch (who has restored the huge feasting table, at which the Glasites took that soup) mingle with artworks by, among many others, Winston Roeth, Charles Avery, Richard Forster, Harland Miller, David Austen and Frank Walter (first ever representative of Antigua and Barbuda at the 2017 Venice Biennale). Jonathan Owen makes Eraser Drawings, often starting with illustrations from books of cinema history – film stills or portraits of actors – then gradually removing ink from the surface of the page to erase the figures. In Twenty he also exhibits a classical 17th century bust, its face removed and replaced with a linked stone chain. Owen asks us to look again, to question what we see.

Performance artist, photographer and filmmaker Jonny Lyons records himself enacting ‘hand-crafted mischief’. Using contraptions such as wooden rocket launchers and giant stilts – all made by himself – Lyons considers the recklessness of youth and the pressures of adulthood. The Inglebys often support young artists in the early stages of their careers, and at 29 years old Lyons is the youngest gallery exhibitor. He has created two new works for Twenty; the rest of his exhibits began life as part of his Duncan of Jordanstone College of Art degree show. When the renovations of the building were complete and the scaffolding came down, the Inglebys realised that the building had a secret; it had been designed as a sundial. At midday the reflection from the etched and painted panels of the dome creates a perfect octagon on the back wall of the gallery – an octagon only visible to the elders who sat on the tiered pulpit facing the congregation. Why did Black include this feature? Was it simply decorative, or did it perhaps give the elders a hint that it was time to adjourn for lunch? No-one knows, although Florence Ingleby has tracked down a former Glasite, now aged 92, and is hoping to find out more from him.

‘An incredible example of a building that was built right’

In bringing their gallery to Barony Street the Inglebys have found the perfect place to continue their longstanding commitment to Scottish visual arts; a place that is essentially Edinburgh, a ‘place that is of this place.’

With thanks to Richard and Florence Ingleby and Amy Murray, Gallery Manager.