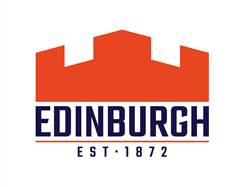 A new brand identity has been launched by Edinburgh Rugby that the club feels better reflects the city’s long and proud rugby heritage, whilst signalling a new chapter for the club in the modern game.

The club’s name remains Edinburgh – ensuring Scotland’s capital city remains at the heart of everything – but from today, a new club badge will come into effect alongside colours that were first adorned by the world-famous players that represented the city’s district side.

Head Coach Richard Cockerill today welcomed the club’s striking new identity: “We have to have a strong identity and, hopefully, this is the start of what this club is going to be about – not only on the field, but off it as well. We have to build an identity that everyone can buy into – whether that’s supporters, how we play with the players we bring in, and how we train and behave.

“We’ve chosen a colour that’s traditional, that goes back to the heritage of the team, and I’m sure our supporters can identify with that, young and old. This is what Edinburgh looks like as a rugby team and hopefully that translates into what happens on the field.”

The new club badge retains the three turrets inspired by Edinburgh Castle, the original district badge and the city’s flag and coat of arms. The turrets are presented in a bold and modern shape above the city’s name, with the only new addition to the crest being the year in which representative rugby was established in Edinburgh – 1872.

Meanwhile, the club colours will return to the original palette of the Edinburgh district side when some of the city’s most celebrated rugby names traditionally played in blue and white.

The old red has been replaced with a burnt orange colour – inspired by the city’s volcanic beginnings at Castle Rock and Arthur’s Seat – to signify this new and exciting chapter for Edinburgh in the modern game.

The new Edinburgh brand was launched on the day that the club’s planning application for a new home stadium was submitted to the City of Edinburgh Council.

Managing Director Jonny Petrie, said: “The proposed new stadium is a transformational development for this club, and with Richard Cockerill’s ongoing transformation of the team on the field, it feels like the perfect time to relaunch the club’s brand.

“Over the past year, we have conducted an enormous amount of research about the club, the city and the rugby roots in the capital and I share Richard Cockerill’s belief that by reconnecting with our heritage, we can look to the future with a lot of pride and confidence.”

Alongside today’s historic announcement, the club has also announced a new ticketing structure that will see professional rugby in Edinburgh become the best value and most accessible sports team in the city. For more information on ticket prices for the 2018/19 season, visit edinburghrugby.org.

Cockerill continued: “We’ve had many new beginnings but we have to build on the strong foundations that were established last season – which is good people, working hard work and caring about what they do in order to win. But we also have to have a brand, a style of rugby and a club-feel that people want to follow and be part of.

“My message to the people of Edinburgh and beyond is to come and be part of something that’s going to get bigger and bigger. Come at the start of it so in 10 years’ time, you can say that you were here at the start of what is going to be Edinburgh Rugby for the future.”