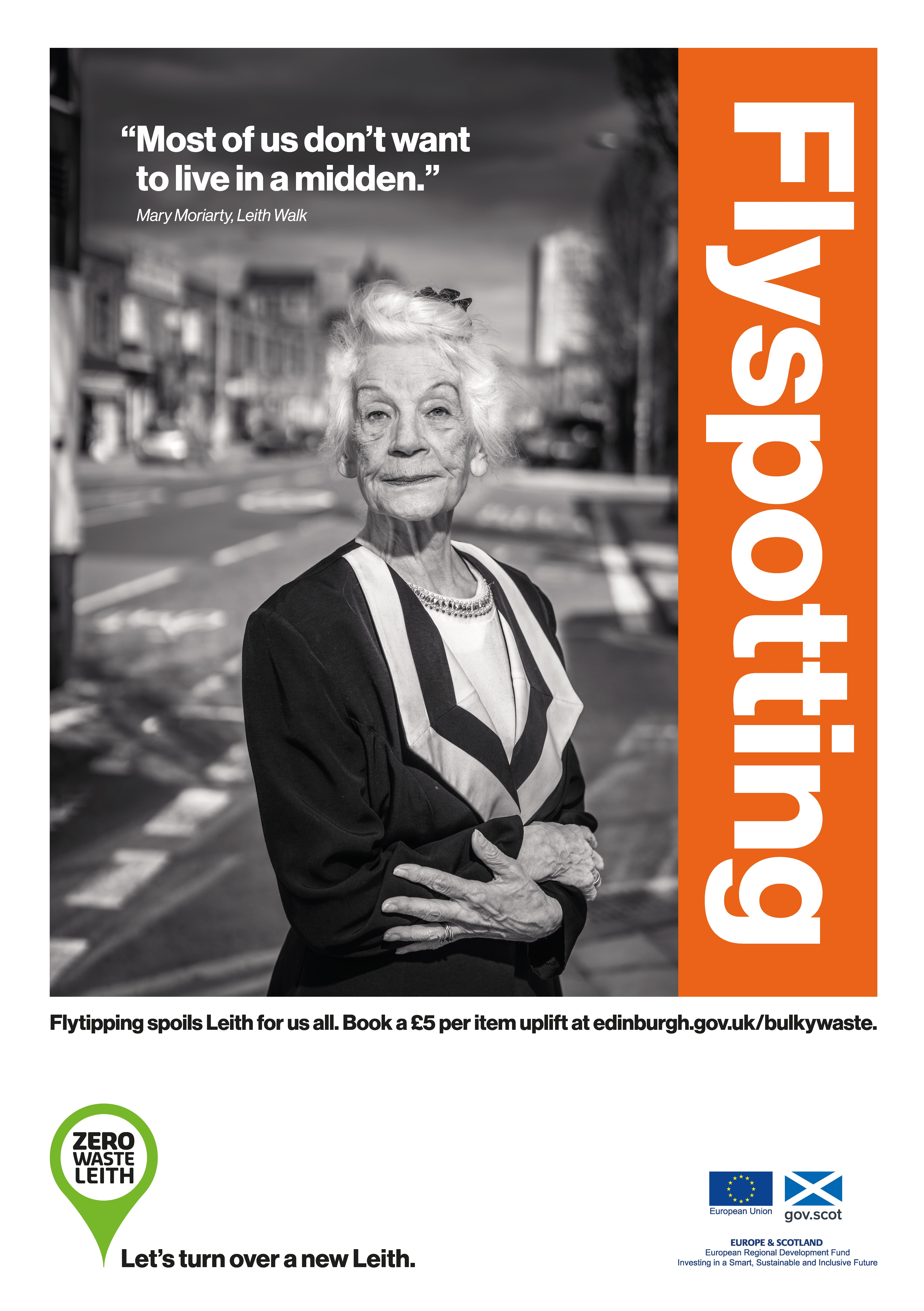 Changeworks the environmental charity will launch a new campaign to reduce fly tipping in Leith this weekend.

The ‘Flyspotting’ campaign will use posters, street stencils and flyspotting stickers in and around Dalmeny Park to get the message across.

The idea came from research which Changeworks did earlier this year which found that 8 out of 10 people thought fly tipping affected them personally.

Now the charity is partnering up with the council and other local organisations in a combined effort called Zero Waste Leith, funded by Zero Waste Scotland and the European Regional Development Fund. The aim is to achieve cleaner, greener streets in the area before employing the same tactics elsewhere in the city. Changeworks commissioned Zsuzsa and Gerry Farrell of Gerry Farrell Ink, who also run the popular volunteer anti-litter organisation Leithers Don’t Litter, to design this anti-flytipping campaign for Leith.

They came up with flyspotting as a term to represent a new approach to the problem and the posters and stencils which say ‘not in our neighbourhood’ are head-turning. The campaign also offers a nod to the Trainspotting films which were largely set in Edinburgh.

This Sunday there is a Flyspotting premiere event which is free and begins at 2.30pm.

Leithers are invited to the official premiere of the Flyspotting campaign at the On-Street Living Room installation in Dalmeny Street Park, Leith, at 2.30pm on Sunday 13 May. Be the first to see the railings portrait exhibition by Leith photographer Euan Myles, enjoy chit-chat with local legend Mary Moriarty, a flyspotting game for kids and refreshments afterwards in Out of the Blue Drill Hall (also the alternative venue in case of rain).

Hannah Milne, Zero Waste Leith Co-ordinator at Changeworks said : “From Monday 14 May we will be working with our team of volunteers to post a new ‘Sunshine on Leith’ magazine about flytipping through letterboxes in our pilot area.

“We’ll also be putting out posters, street stencils and ‘flyspotting’ stickers in the area, including a photo series on the railings of Dalmeny Street Park that show locals sharing their thoughts on flytipping. The community really cares about living on cleaner, greener streets – it was brilliant to see over 270 people taking part in litter picks we organised in the Leith area to celebrate Earth Day recently. We can’t wait to hear and see the response to the flyspotting campaign, and enjoying the clean streets of Leith!”

Edinburgh Council’s Transport and Environment Convener Councillor Lesley Macinnes, said: “This eye-catching campaign is bound to capture the interest of people in Leith and I’m delighted to see that locals are already getting into the spirit by taking part in recent litter picks.

“It’s this kind of community involvement that drives the Council’s own Our Edinburgh initiative, which has seen people across the city taking pride in their local neighbourhoods and discouraging those who flout the rules.

“I look forward to seeing the positive impact Zero Waste Leith will have on the area, alongside work under Our Edinburgh, and call on all ‘flyspotters’ to keep us posted!”