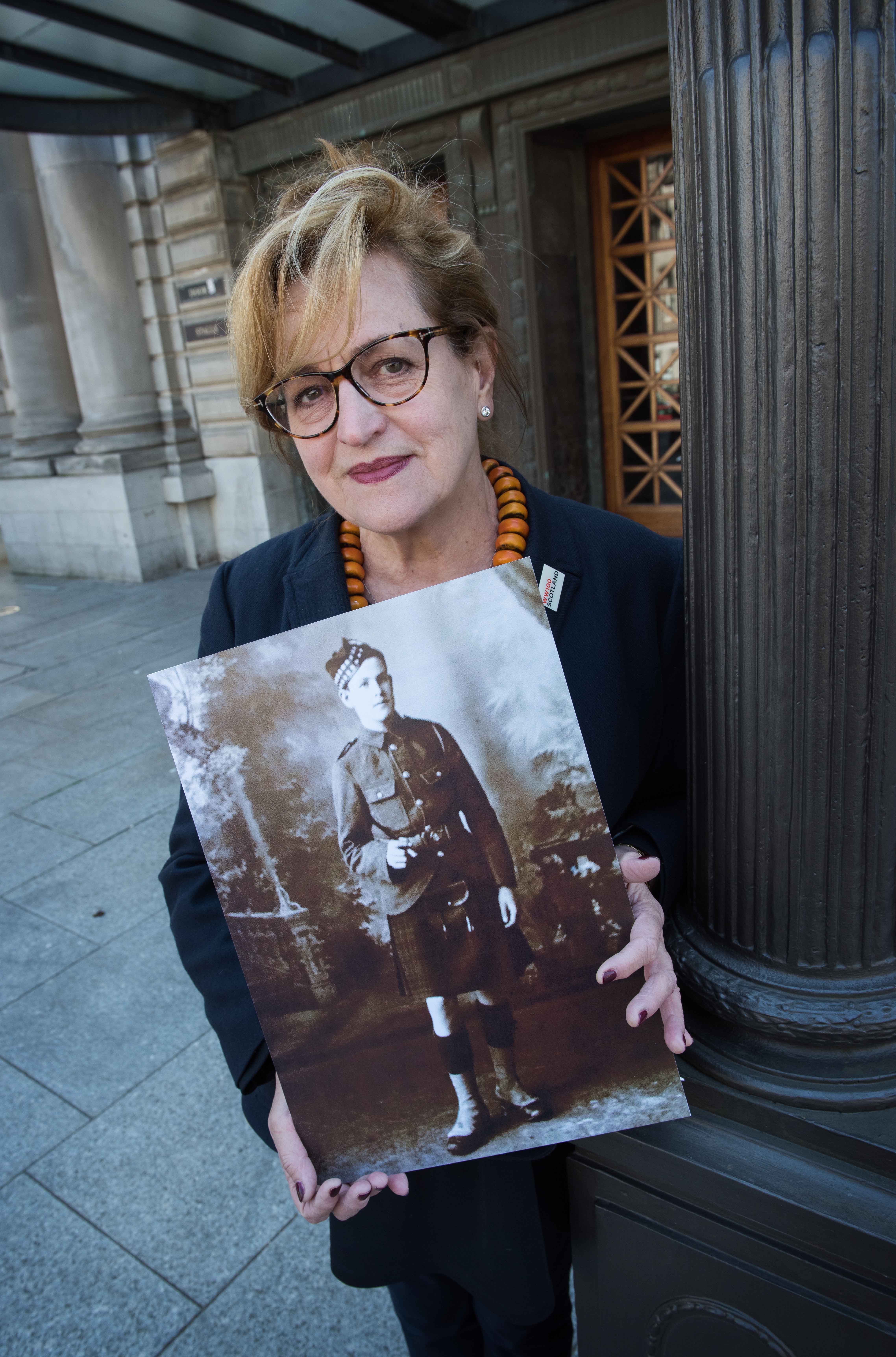 A critically acclaimed multimedia production featuring renowned Scots performers including Barbara Dickson and Siobhan Miller is to embark on a commemorative tour of Scotland to mark the centenary of World War One.

Delivered by WW100 Scotland in partnership with Legion Scotland and Poppyscotland, the Far, Far From Ypres tour will visit ten venues across the country throughout the centenary of the final hundred days of the war, using the songs of the trenches to tell the story of the Scottish war effort. The closing performance will take place at the Usher Hall in Edinburgh on Armistice Day. Barbara Dickson takes part in the show in memory of her uncle David Dickson, who enlisted while underage and was killed in the Battle of the Somme in 1916. Today, she met with fellow cast members outside the Usher Hall to teach pupils from Tollcross Primary School the lyrics to some of the songs and the stories behind them.

The show was devised, written and produced by Ian McCalman of folk group The McCalmans to highlight the unique insight the songs offer into the life of a soldier. It shares the hope, suffering, endurance and fear associated with the war through the eyes of fictional, prototypical soldier, Jimmy MacDonald. Like many young men, Jimmy is full of enthusiasm and joins up right away, however, when he is sent to the Flanders trenches he begins to experience the true horrors of war.

Ian McCalman commented: “During the war, soldiers sang together to bond and alleviate fear, sharing songs from contemporary music halls as well as creating their own. However, looking back on the music of the war today, we can see how attitudes towards the conflict changed over its course. From the early, jingoistic songs that promoted recruitment and betrayed an innocence about the reality of war, through to the resignation, black humour and resentment present in the later songs, the progression reflects the bitterness which grew among troops as they became disenchanted.

“The songs provide powerful context to key events in an era very different from our own, and with Far, Far From Ypres, we have harnessed their power and accessibility to bring the story of the war to our audience in an engaging, multimedia production that educates and lingers. The entire cast is excited and honoured to be bringing the show to communities across the country as part of the WW100 Scotland commemorative programme, and we look forward to sharing the story of Jimmy McDonald – representing so many young soldiers of the war – with thousands.”

The show will also incorporate stories about local men at each performance, which are being sourced as part of a community engagement project led by Legion Scotland. Working with the likes of schools, youth groups and history societies, the veterans charity is helping research the local area’s contribution to the war in order that these stories might be preserved and passed down to future generations.

Professor Norman Drummond, chair of the Scottish Commemorations Panel appointed to oversee the WW100 commemorations on behalf of the Scottish Government, said: “By the end of the war, thousands of men from Scotland had gone valiantly to the frontline, a high proportion of whom never returned. For many survivors, devastating injuries and the trauma of war changed their lives forever, while the nation as a whole grieved the vast loss of loved ones.

“It is vital that we continue to commemorate these losses today, and the Far, Far From Ypres tour, a key part of Scotland’s Armistice centenary programme, will carry this message to people of all ages across the country as we encourage families to attend with all generations in tow for what will be a highly moving and educational experience.”

Cabinet Secretary for Culture, Tourism and External Affairs Fiona Hyslop, said: “World War I had a devastating impact on our nation, with no town or village unaffected. The Far, Far From Ypres tour, part of the broader programme of activity to commemorate Scotland’s Armistice centenary, will ensure that we continue to learn more about and reflect on what we have learned from the First World War.

“Until the end of 2018, through a series of events taking place across Scotland, Scots can continue to reflect on the devastating impact of WWI and its lasting social and civic legacy, ensuring that the brave soldiers who fought in one of the world’s most brutal conflicts will never be forgotten.”

Kevin Gray MM, CEO of Legion Scotland, said: “As the custodians of Remembrance in Scotland, our involvement in commemorative projects like the Far, Far From Ypres Tour is hugely important. As we approach the centenary of Armistice Day, it is more important than ever to ensure that we continue to remember the thousands of lives lost in World War One, and that we preserve the stories of bravery and selflessness so that future generations may never forget the sacrifices made. We’re honoured to be leading on the community engagement element of the tour, working with our members across the country to unearth local stories and help give communities a greater understanding and pride in their area’s contribution to the war.”

Mark Bibbey, Chief Executive of Poppyscotland, commented: “Founded in the aftermath of the First World War, Poppyscotland continues to provide life-changing support to members of the Armed Forces community.  While our work remains as vital today as it did back then, it is also important that we never forget past sacrifices and this production is a powerful reminder of the brutal realities of war.”

Clydesdale Bank, part of the CYBG group, is one of several organisations generously sponsoring the Far, Far From Ypres tour.

Helen Page,  Group Innovation and Marketing Director at CYBG, commented: “We are proud to sponsor Far, Far From Ypres and believe the work that WW100 are doing alongside Legion Scotland and Poppyscotland is highly commendable. It’s important to continue to tell the story of the Scottish war effort, rather than let history die out over time. Clydesdale Bank was established in Glasgow in 1838, so Scotland’s history, its industry and its communities will always be central to what we do. We look forward to following this production as it tours across the country.”