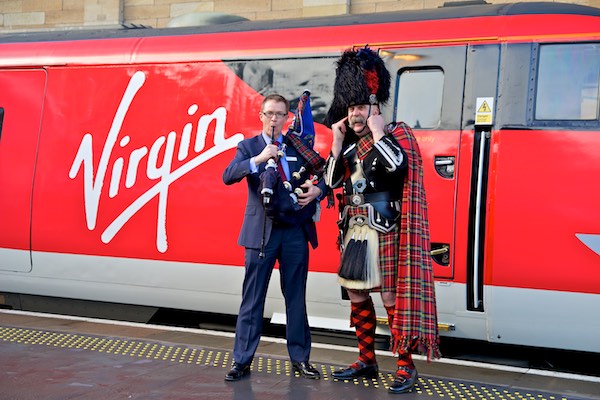 As widely expected Transport Secretary Chris Grayling announced today that the East Coast mainline will be taken away from the joint venture between Stagecoach and Virgin Trains. He said that the two companies who bid to run the franchise will have lost £200 million in meeting their contracted commitments, but assured the Commons that taxpayers have not lost out.

Having considered allowing Stagecoach to run the line on a not for profit basis until 2020, Mr Grayling has now decided to put temporary control of the line back in the hands of the Department for Transport. He said that neither option was particularly superior to the other, but that this will be in the long term interest of passengers. The contract with Virgin Trains East Coast which began only in 2015 will end on 24 June 2018 when the government will recreate what the Transport Minister described as one of Britain’s iconic rail brands, the London North Eastern Railway (LNER) thus reinstating what was in place almost 100 years ago in 1921.

There will be a new board with an independent chair working with the Department of Transport to form a new partnership.

An interim chair will be announced shortly.

The Minister was keen to stress that there will be no apparent changes to train services and all tickets will be valid for future travel, and while Virgin and Stagecoach have been stripped of this franchise the companies will be allowed to continue as train operators.

Scottish Labour has welcomed the decision to remove the running of the East Coast mainline from Stagecoach and Virgin – but claimed that there had been a deafening silence from the SNP.
Scottish Labour’s Transport spokesperson Colin Smyth MSP said: “When publicly run the East Coast franchise delivered over £1 billion to the UK Treasury, kept fares down, had record passenger satisfaction and engaged the workforce.
“But when in private hands it failed – not once, but three times and the Government has had to bail out the franchise once again.
“It is now essential both Virgin and Stagecoach are barred from bidding for any future franchises – but the SNP’s silence on this issue has been deafening.
“Just hours before the UK Government confirmed its failed privatisation experiment had come undone, SNP Transport Minister Humza Yousaf brazenly shrugged his shoulders and said he doesn’t even care whether the East Coast rail franchise is in public hands or not.
“That is an insult to passengers and hard-work rail staff, not to mention potentially damaging to Scotland’s economy.
“Unlike the SNP, Labour supports rail services run for people not profit. The East Coast mainline should be taken under public control permanently and we will now fight to ensure the ScotRail franchise contract is brought back into public ownership.”

At Holyrood Transport Secretary Humza Yousaf explained that his Westminster counterpart had to make the announcement to the House of Commons first. He went on to reply to Colin Smyth that he had no real preference for either option under consideration.

Later he said on Twitter that while he supported the UK Government move to running the East Coast mainline as Operator of Last Resort they have failed this franchise three times in the last ten years.

He continued : “I’ll be speaking to the UK Government later today and demanding Scottish Government is involved in the new board that the Secretary of State is setting up. We cannot be ignored.”

Scottish Liberal Democrat transport spokesman Mike Rumbles MSP said : “Stagecoach failed spectacularly to deliver on its East Coast mainline rail contract, compromising one of Scotland’s most important transport arteries. Given this history, it would be right to exclude Stagecoach from the shortlist for further contracts of this kind. We need to know our rail providers are capable and reliable. Let’s not make a habit of rewarding failure.”

The RMT (Rail, Maritime and Transport Workers) General Secretary Mick Cash said : “This is the second time that the Government have called upon the public sector to launch a rescue operation on the East Coast Main Line and instead of being a temporary arrangement Chris Grayling should listen to his staff and the public and make it permanent.

“After three shambolic private sector failures on the East Coast the message should now sink in that these cowboys cannot be trusted and should be locked out of the system on a permanent basis.

“Anything else risks playing out the same expensive farce over and over again. RMT will now be seeking an urgent meeting with the new operator to bolt down guarantees for staff on jobs, conditions and pensions.”