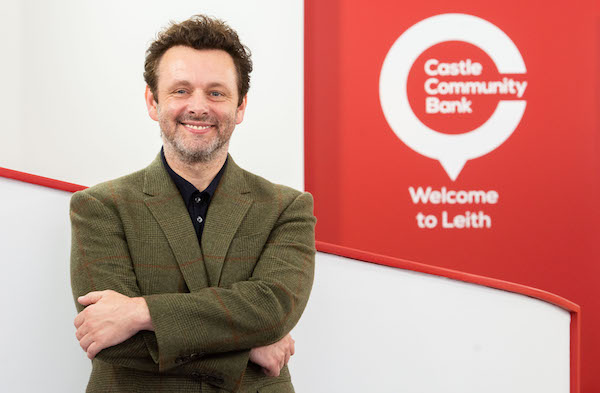 Actor Michael Sheen was in Edinburgh to sprinkle some Hollywood stardust on a new community bank, and call for battle to commence against high street lenders.

The Frost/Nixon and Twilight star officially opened the new Castle Community Bank in Great Junction Street where he spoke to an invited audience of community and business leaders about credit unions.

He joined Communities Secretary Angela Constance and explained his crusade against pay day loan companies. The Welsh born actor was in Scotland just a few weeks ago to launch the End High-Cost Credit Alliance which is part of that work. He has said that he now understands how he can use his fame to support his campaigning work.

“Fair and accessible credit has a vital role to play in Leith, North Edinburgh and beyond. That’s why I have been working over the last 2 years to support Castle Community Bank and it’s great to see this modern, very impressive credit union going from strength to strength.

“Such high-profile support from Michael Sheen is a tribute to the great work that Castle Community Bank is doing and I hope that today’s official opening will raise awareness of their services and those of credit unions generally, as a more empowering and more responsible alternative to high-interest loan companies.” “While RBS closes its doors to customers across Scotland, it’s great to see an ethical alternative actually opening a high street branch and seeking to serve the community.

“I’ve been very impressed with the work of founder Rev Iain May since he decided to apply his banking skills to take on the loan sharks and help people break the cycle of debt.

“I wish Iain and the team well and hope Castle Community Bank is a model that can be further developed right across Scotland.”

Castle Community Bank is a not-for-profit credit union and its directors are all volunteers. It was founded by its Chair, Reverend Iain May,  a former banker with RBS and Allied Irish Bank who became a Church of Scotland Minister.

He said: “We’re incredibly grateful that both Michael and Angela freed up time to open our branch – and it really means a lot to have their support alongside our backers and clients in the city.

“Since Castle Community Bank was created in 2015  we are proud that we’ve helped more than 1500 people get access to fair and affordable credit.

“Sometimes people mistakenly believe that credit unions are only there for emergencies or for people who are on benefits – but nothing could be further from the truth.

“In fact, every day we provide loans to ordinary people and families across Edinburgh and Lothians enabling them to do the things they want in life – create or improve their family homes, buy a car or to help prepare for and manage life events, like having a baby or planning their wedding.

“We are constantly working to raise our profile and get that message out to more and more people, who may otherwise find themselves falling into a cycle of problem debt by taking out hire purchase agreements or pay day loans at punitive rates of interest which they can’t really afford.

“It’s our very real hope that having Michael cutting the ribbon on our new branch will get our name in front of an awful lot more people who may be interested in finding out more about us and maybe using our services.”

Angela Constance, Cabinet Secretary for Communities, Social Security and Equalities, said: “It is a pleasure to be able to open the bank alongside Michael.

“Everyone should have access to the financial products they need to help them get on in life, without feeling that they have no choice but to turn to organisations such as payday lenders, which often charge extortionate interest rates, leaving people trapped in a cycle of debt.

“Community lenders such as the Castle Community Bank are vital to helping more people access the support they need.

“The Scottish Government wants to tackle the poverty premium so many on low incomes families  face which is why we recently announced £1 million for the Carnegie Affordable Credit Loan Fund to help low income families have greater access to affordable credit.”