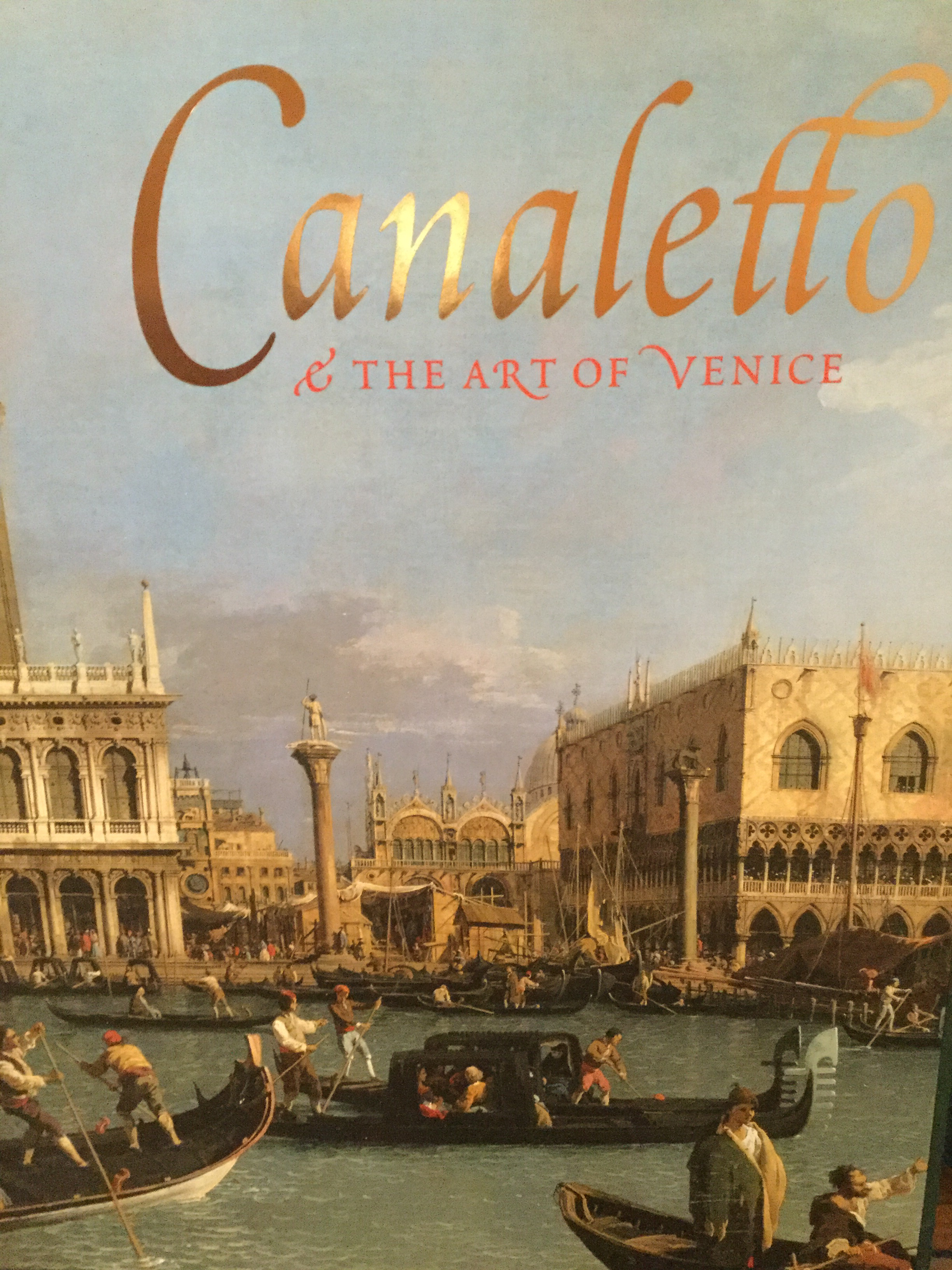 What did you bring back from your last holiday? Whatever your souvenirs of choice may have been, they almost certainly included several hundred photos, and probably a video or two.

Nowadays it’s easy to create lasting memories of our visits to foreign climes, but in the 18th century cameras were still a century away. Young men sent on their Grand Tours of Europe wanted paintings and drawings to remind themselves of their youth and to  show their friends, and few artists obliged so impressively – and prolifically – as Giovanni Antonio Canal, or Canaletto, Venice’s leading painter of views. Canaletto and the Art of Venice, a new exhibition at The Queen’s Gallery, Palace of Holyroodhouse, displays one of the world’s finest collections of the artist’s work, along with that of his contemporaries Sebastiano and Marco Ricci, Francesco Zuccarelli, Giovanni Battista Piazzetta and Pietro Longhi. Together these men captured the splendour, beauty – and everyday life – of a world power on the cusp of change. He was the son of a stage painter, and initially became one himself.

In the early 1700s Venice had no fewer than 19 opera houses, so there was plenty of work to be had in creating scenery and backdrops.

Although Canaletto soon moved on to the more lucrative tourist trade, the skills he learned in his first job are often seen in his paintings. He understood, and was daring with, perspective, he did not shy away from huge canvases, and he had no qualms about manipulating scenes to make better, more balanced pictures. It is said that he was a confident man, who never questioned his skills and popularity.

Canaletto would no doubt have had a successful career on his own, but the patronage and agency of wealthy Englishman and Venice resident Joseph Smith brought him numerous commissions and greatly boosted his reputation. And it was Joseph Smith’s avid collecting of Canaletto’s works that ultimately brought them into the possession of the Royal Collections Trust. Smith was a merchant and banker who moved to a palazzo on the Grand Canal in the early 1700s and started collecting and dealing in books and paintings. Appointed British Consul in 1744, Smith loved Venice and liked to live as Venetian aristocrat, his house becoming a meeting place for the Venetian literati to discuss Enlightenment ideas. Smith met Canaletto in the early 1720s, saw his potential and commissioned him to make a set of paintings of the area around San Marco, the civic and religious centre of the city. In San Marco and the Piazza looking east we see the church and the campanile in the distance, the huge piazza dotted with carefully placed groups of Venetians and tourists, some in cloaks and hats, others wearing turbans, some nuns in black, a few dogs running about.

White sunshades wave above windows, parasols are lined up in front of the church’s walls. Canaletto’s famed mastery of light is seen in the shadows darkening the buildings on the right, while above the skies are eggshell blue with wispy clouds.

Surely this picture must reflect the scene as the artist saw it? Well yes and no; the theatre-trained Canaletto had in fact reduced the size of the campanile to prevent it from dwarfing San Marco itself. This was not the first time, nor would it be the last, that he had altered the facts to suit his desire for a perfectly balanced painting.

Canaletto’s sketches of the Piazza at first appear to have been quickly executed, but they still include detail – a figure sits on the steps, birds fly above the square. In 1745 the bell tower of San Marco was struck by lightning, and Canaletto found this so interesting that he sketched it under repair (The Campanile under repair), with the elaborate hoist system used to take materials up to the damaged top drawn in meticulous detail.

Smith asked Canaletto to paint twelve enormous paintings of the Grand Canal; together they take us from the workshops of the canal’s upper reaches right through to St Mark’s Square. Although it is not known exactly how Smith displayed these works in his palazzo, at The Queen’s Gallery six face the other six across the main room.

Each view shows the magnificence of Venice’s architecture, the beauty of both stone and water, and little scenes of Venetian life; a covered gondola ferries a figure in pale pink across the canal, sailing boats go up and down, red and white laundry hangs from windows, potted plants adorn window ledges. Once again, Canaletto has used artistic licence to enhance reality; in the sixth painting, The Rialto Bridge from the North, he has enlarged the bridge in relation to the buildings and opened out the view.

Recent research has shown that he did not, as had been thought, use a camera obscura to achieve topographical accuracy; the Royal Collections Trust’s art historians passed infra-red rays through the surface of a drawing to reveal the pencil marks underneath the ink, showing that Canaletto actually used a ruler in his studio to draw in all the lines of the buildings, even extending them into the canal to show their reflections in the water. He may have moved buildings and bridges to suit his needs, but he was assiduous in plotting the outlines of facades and windows. Once people had seen Canaletto’s works chez Smith they wanted some themselves, and Smith was more than happy to act as agent, get a price agreed, and even deal with postage and packing. The rich commissioned paintings, the slightly less affluent requested prints.

Venice had already been a centre for printing for many years; Canaletto, his nephew Bernardo Bellotto, Marco Ricci and Giovanni Battiida Tiepolo all experimented with etching, and there are several examples of their work here. Tombstones, urns and decaying landscapes abound, and in one strange drawing Tiepolo even shows the figure of Death, apparently reading from a book to a group of anxious people and a rather scabby dog. The enigmatic nature of these prints greatly appealed to buyers; Canaletto’s fans included the Dukes of Richmond and Bedford, the Earl of Carlisle and Sir Robert Hervey.

Canaletto’s etchings often included capricci, scenes combining real and imaginary architecture. Both he and Marco Ricci also painted in this genre; Canaletto’s A Capriccio View with a Pointed Arch (right), is a particularly fine example, in which an extraordinary shaft of light illuminates the slates of a rough path under an ominous grey sky. In the background we see the Colosseum and a crumbling classical archway, while through another arch a dome is flanked by two church towers. In the foreground two men appear to be digging in the stones; a woman carries laundry in a basket. Ricci’s Capriccio with Roman Ruins is also full of nostalgia, decay and the sense of a great age now passed.

For the Grand Tourists Venice, with its carnivals, street theatre, opera houses, gambling and brothels, was above all a place for hedonistic enjoyment. Opera was immensely popular with visitors and locals alike. Joseph Smith had a box at Teatro San Grisostomo and even married a retired opera singer (on her death he married again at the age of 82.) His collection includes Ricci’s Farinelli in Walking Dress, a pen and ink drawing of the famous castrato, who performed at the Teatro in 1729-30.

The Crossing of San Marco looking to the North Transept on Good Friday (left)  , one of the last commissions Canaletto painted for Smith, provides a striking contrast to his scenes of canals, the facades of palazzi, and lives lived out of doors. This wonderful painting is perhaps my favourite in this exhibition; the vast church soars above the congregation, white-robed clergy officiate, the people cluster below, and soft late afternoon light pours in from the west doors. To the right, the cross and the crucifix dominate. One is immediately aware of the importance of the occasion; this is neither opera nor carnival.

Although the exhibition includes two magnificent paintings of Venetian spectacle, A Regatta on the Grand Canal and The Bacino di San Marco on Ascension Day, as the century wore on Venice was beginning to lose some of its importance, particularly as a centre for international trade.

Tourism also declined (temporarily!) during the War of the Austrian Succession (1740-48) and the Seven Years’ War (1756-63), and in 1797 the city became Austrian territory. Although its nationality changed several times in the ensuing decades, by then both Canaletto and Smith were gone. Before his death in 1770, Smith made plans to sell his collection of books, prints, drawings, and paintings; negotiations with advisors to George III began, and in 1762 a sale price of £20,000 was agreed. The entire collection moved to England, which is why we are now able to see it so excellently displayed at The Queen’s Gallery.

Canaletto and the Art of Venice is at The Queen’s Gallery, Palace of Holyroodhouse, until 21 October 2018. The Gallery is open daily 9.30am-6pm (last entry 5pm). Admission charges apply (tickets purchased direct from the Gallery include free re-admission for one year from the date of your visit).

A hardback catalogue of the exhibition is available at the price of £29.95. A DVD is also on sale for £15. 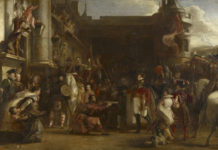