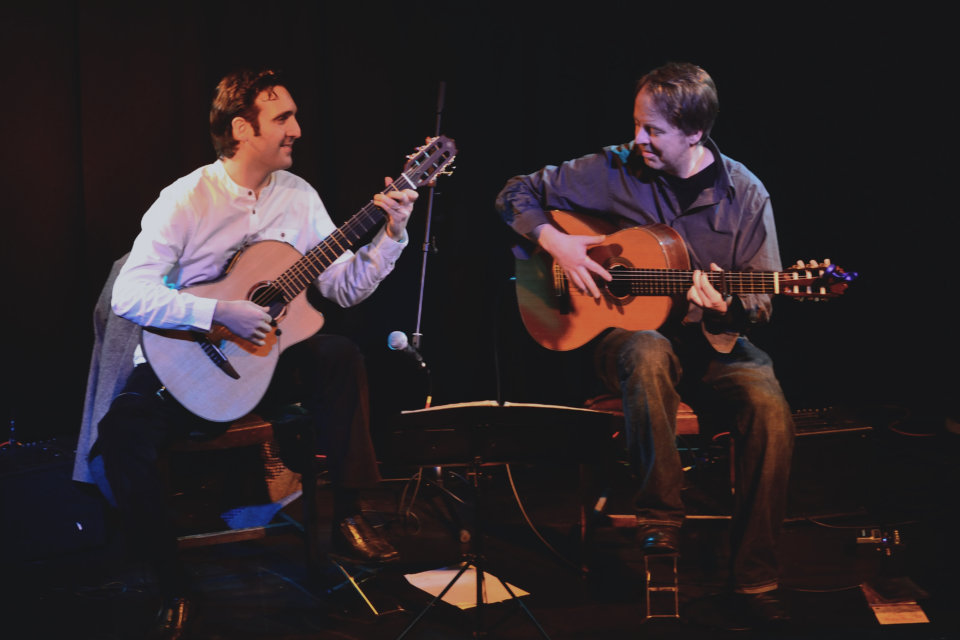 Guitarist Giorgio Serci has a complete stranger to thank for setting him on the journey that brings him and his playing partner, Jonny Phillips to Craiglockhart Parish Church on Saturday, 12th May.

It’s a journey that has included performances with Jools Holland, Dame Shirley Bassey, Julian Lloyd Webber, the Berlin Philharmonic Orchestra and a number of other prominent names. But Sardinia-born Serci has no
idea about the identity of the chap on the beach who made him want to become a guitarist.

“Some friends and I were camping back home in Sardinia when we were about thirteen,” says Serci. “I didn’t play guitar at all at the time but one of my friends could accompany himself quite well on Italian folk songs. One evening we were sitting listening to him when this guy came along and asked if he might play my friend’s guitar. He picked it up and just blew us all away with this amazing music. And that night I decided I should try to be like that guy.”

In 1994, having initially taught himself before going on to study classical guitar at Italy’s Nuova Accademia, Serci moved to London to study jazz and popular music at Goldsmiths College. He later studied composition and arrangement at the City Lit College and completed projects for the City of Birmingham Symphony Orchestra and the BBC Symphony Orchestra.

By this time he was also settled into the London gig scene and it was after a concert that he and Phillips, who happened to be in the audience, got chatting.

Phillips had just formed his Latin American-influenced band Oriole, whose three albums for the ground breaking F-ire jazz label have been enthusiastically received by critics and audiences alike. Having heard Serci play, however, he was determined to work with him.

“For a long time I’d had this idea for a group that explores the history of the guitar from its origins in Spain and North Africa out across the Americas,” says Phillips, who regularly visits Spain and Portugal to play and soak up the music there.

“Oriole does that to some extent but I like the two guitar format – it’s easily portable for one thing – and the moment I heard Giorgio play I felt he would be the ideal partner. It just took us a while to
organize time for us to work on it.”

Eventually, in 2015, some twenty years after they first met, Serci and Phillips formed Guitar Journey. The tour that brings them to Craiglockhart is their third trip to Scotland, their previous visit having been for a sold-out concert at Celtic Connections in Glasgow last year.

Although both players are serious students of the guitar and its international influence – Serci has a particular fascination for Brazilian and Cuban musical styles – they were keen to avoid a scholastic approach in presenting the music they put together to illustrate the guitar’s journey.

“It’s really about communicating how we feel about the music rather than how much we know,” says Serci. “When I first heard Jonny play I was immediately struck by his ability to tell a story through his compositions. He also has a deep understanding of traditional music from different parts of the world, and that comes across in his playing. It makes it fun for me to play with him and, I hope, a really enjoyable, entertaining experience for the audience when we play together.”

As for the stranger on the beach, Serci never saw him again and probably wouldn’t recognise him now but he’ll be forever grateful to him for pointing him in the right direction.