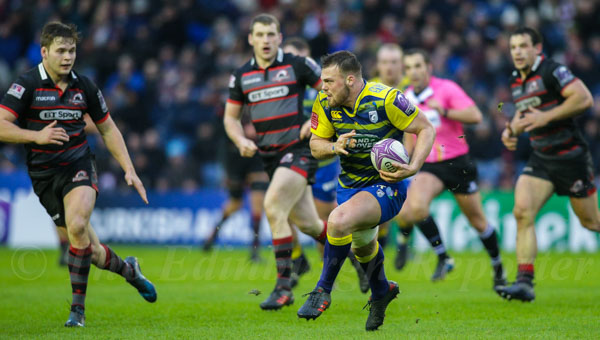 Bounce of the ball beats Edinburgh Although, to be fair, too many penalties, turn overs and mistakes did them no favours either….. Of the two sides, it was Cardiff who kept their heads better when it was required and more than justified their semi-final place.

The omens weren’t good from the start as the ‘fog’ from the pre-match fireworks took an age to clear, but the referee started the match anyway, despite protests from the players. The highlights of the first quarter of the match were few and far between with only a missed penalty by Cardiff’s 10, Jarrod Evans, on 15 minutes and a successful attempt at the other end from Edinburgh’s Jaco van der Walt for a 3-0 lead and a bit of relief for the home support.

Relief that was swept aside as, from the restart, Cardiff made progress into Edinburgh territory, but the defence held, forcing the visitors into playing side to side, but easily retaining possession. The stalemate was, unfortunately, broken when the ball came back to Evans who kicked – speculatively it appeared – over the top and into the goal area. It looked as if Nathan Fowles had done enough to cover, but as he turned to collect the ball, it seemed to hold up in the swirling breeze, dropped a half metre short and bounced off his shoulder, onto the grass and was pounced on by the charging figure of flanker, Ellis Jenkins, for the try in the corner. Given the unpredictable wind, hopes were high with the home support that Evans would miss, but miss he didn’t and it was 7-3 to Cardiff.

The match then returned to the to-ing and fro-ing of the first period, with, perhaps, Cardiff having the better of play as Edinburgh seemed to be vulnerable to those turn overs and the referee’s whistle.

Just after the half hour mark, Cardiff were pressing down the left, but again, the defence was hanging on so another kick was called for. With full back, Gareth Anscombe, up in the line, he slotted a grubber through which seemed to be covered by his opposite number, Blair Kinghorn. However, ‘seemed’ was the operative word as, just as he slid over to collect, the ball took the second of those ugly bounces over the line and, in the same corner, wing Blaine Scully followed up for the try and 11-3. Once again, Evans was faced with a difficult conversion and, once again, the home side were faced with the stand off’s success with the boot for 14-3. Cardiff continued to dominate proceedings for the remainder of the half, but the sides went into the break still at 14-3 with things looking difficult for Edinburgh for the second half, never mind the difficulty of the immediate face-to-face with Richard Cockerill in the changing room!

Whatever he said worked… For at least five minutes, anyway, but the 45th minute penalty attempt at goal from Evans fell short.

Then it was Edinburgh’s turn again as they pressurised the Cardiff defence, but despite looking good for some decent points, had to settle for a second kick success from van der Walt for 14-6.

Then, the coach-killer struck as, just a couple of minutes later, Edinburgh were penalised at the breakdown – again – and Evans re-established the points gap with a successful penalty for 17-6.

With just under 30 minutes of the match remaining, there was, in the eyes of the home side, plenty of time to come back, but Cardiff were determined that they wouldn’t.

A fine break from Kinghorn on the hour mark lent some weight to this thought, but the attack came to naught when he was stopped a few metres short and Cardiff managed to clear. The mountain the Edinburgh had set themselves grew a few metres on 66 minutes as Evans opened up the gap again with another penalty, for what was to be the final score, 20-6, thus making progress into the semi’s for Edinburgh that little bit further away.

However, as the final 10 minutes approached, the home side found themselves a man up as a yellow reduced the visitors to 14 for a try line infringement. Edinburgh went for the scrum, then for a second once that was penalised, but the final pass from replacement, Duncan Weir – fired out to the, fairly invisible for most of the match – Duhan van der Merwe on the wing, was fired behind the No. 11, bringing Edinburgh’s best chance of a try to a close.

And that was that, Edinburgh continued to press, but the match ended when another turn over handed the ball back to the visitors, leaving the home side to watch it disappearing into the stand accompanied by much joy from the away team and their travelling support.