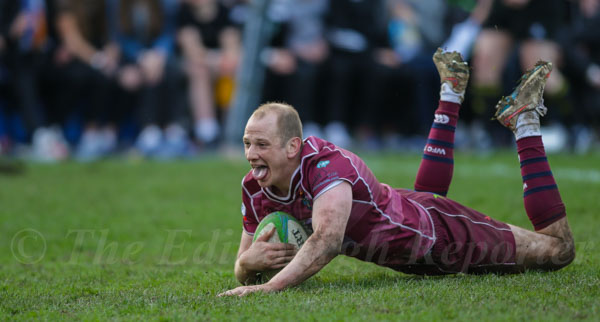 The 2018 Aberdeen Standard Investments Melrose Sevens saw another thrilling edition of the oldest – and some say ‘Best’ – Sevens tournament in World Rugby.

Along with guest sides from the USA, Poland and charity-based club Crusaders, six Edinburgh clubs fielded squads for the 128th competition at The Greenyards, Edinburgh University filling the space traditionally taken by Stewarts Melville, the Inverleith club having League duties to fulfill on the day.

And, traditionally, National League teams were to play a vital roll in proceedings, some showing their Premiership rivals the way home. Currie kicked off proceeding at 11:30 with their tie against Glasgow Hawks. The Edinburgh side were never really challenged and turned a half-time 14-7 lead into a full-time 40-7 win, making many another squad sit up and take notice on the way.

Boroughmuir were next up and, although Cartha Queen’s Park are near the foot of National League 1, they gave the Meggetland squad a few things to think about on their way to their 28-12 victory and two-from-two for the Capital.

Third match on the programme was an all Edinburgh affair with Premiership fixtures, Heriots up against Edinburgh University. The Uni side have concentrated on BUCS rugby in the last few years, but seemed keen to pit themselves against one of the favoured sides of the weekend. And pit themselves they did, playing a fine brand of running rugby to be level at 7-7 at the break, before showing their more illustrious opponents the way home with two unanswered tries in the second half for a 21-7 win.

With Edinburgh Accies and Watsonians both receiving byes through to the second round, the remainder of the 1st round was taken up by the ‘usual suspects’ from Premiership and National League, with Dundee, Marr, GHA, Hawick and Selkirk all winning through to Round 2.

Currie were, again, first up in Round 2, playing Jed-Forest – one of the ‘bye’ teams – and, again, went on to qualify for the next round. Leading 12-0 at half time, Jed-Forest came back in the second period, pushing Currie all the way, but the Edinburgh side held on to win 24-19.

Boroughmuir faced a bit more of an uphill battle in their match as they had home favourites, Melrose themselves, to contend with. But ‘Muir were hardly in the match as Melrose ran in three first half tries for a 17-0 lead, before finishing off their opponents with another two in the second for a 29-0 whitewash. Edinburgh University were up against Edinburgh Accies in their match and, with the sun blazing out of a blue sky, and both teams wearing, near-enough, white(!) they set about their task and were 14-7 ahead at the break. However, the National League 1 runaway table-toppers were not about to let a bunch of pesky students spoil their day and scored two tries to one to squeak home 21-19.

USA Tigers then disposed of Dundee, before Marr were let loose on the Polish National squad, the newly relegated Premiership team having a point to prove on their way to a 33-7 win and a Quarter-final berth. Ayr were also granted a second round bye, but NL1’s GHA showed that a 15’s reputation counts for little in the 7’s game and swept the Premiership team aside 31-5.

Last minute replacements for Romania, Crusaders Rugby then beat Hawick 31-12, before the final Round 2 match of the day, Watsonians v Selkirk. ‘Sonians put their Premiership experience to work and followed up a 12-5 half time lead with a 24-19 final score, keeping their noses in front of a hard working Selkirk side who made them work for the win.

So, with three local teams through to the Quarter-final matches it was looking good for Edinburgh to make a decent showing at the latest iteration of this, the most famous, Sevens tournament.

Currie’s heads were first on the chopping block as, favourites, Melrose turned up the wick and, despite a close first half and 10-5, ran away with the second half scoring another three, unanswered tries for a 31-5 win. Accies then faced the USA Tigers and this was a much closer match in scoring terms, the Tigers having a great deal of territorial advantage but just failed on a couple of occasions to convert their pressure. This was another nail-biter as Accies turned a 5-5 half time score line into a 12-10 full time win with just a missed conversion separating the teams.

Marr and GHA then put together a superb end-to-ender, with both sides showing a willingness to run at the opposition, but Marr eventually took an even closer win with 21-20 at the final whistle.

Watsonians now had to face Crusaders and, while the guest side had plenty of experience, they were a bit ring-rusty and although only two points adrift at the break on 7-5, they couldn’t hold on to the fitter – and younger – ‘Sonians in the second half, the Myreside squad running out 21-21 winners.

Now it was Semi-final time and Accies were first up against Melrose. However, the Edinburgh team were never really at the races in this one, with Melrose galloping over the line for three tries in the first half, before adding another couple in the second for their second whitewash of the day at 31-0.

Watsonians, for their part had a much harder time of it against Marr and were 14-0 down at half time, but, again, they kept their heads and scored three times in the second half to take their place in the final with a 19-14 win. To give the finalists a bit of recovery time, the Melrose Sevens have included an exhibition match and, this year, it was Edinburgh University Ladies who were faced by a Melrose BaaBaas squad with a few guest players in attendance. However, this didn’t faze the University side as, despite being under pressure for most of the match, they held on to a 14-5 half time lead for a 14-10 full time win.

Now it was the final and Melrose and Watsonians took to the field for the final match in another thrilling day of Sevens rugby at The Greenyards.

Watsonians were first out of the blocks with an early, converted try from McKean, before Melrose’s McCann ran in a stunner from 30+ metres out for the, converted, equaliser. With both sides looking a bit cagey, it was never going to be the greatest Sevens match played and, despite some intricate passing moves, the half closed at 7-7.

Once again, Watsonians were first out of the blocks with their second try, this one from Rory Steele – who, successfully, fought off his own physio at one point in the first half so he could carry on playing – and Jackson following up with the conversion for 14-7.

As the Melrose faithful were getting closer to the edge of their seats, Ross McCann popped up with his second, converted try of the match to draw the sides level again at 14-14 and all to play for – as ‘they’ say.

With the clock running down, and extra time on the cards, ‘Sonians were pressing hard on the Melrose defence, keeping them pinned deep in their own half. The breakthrough came in the final minute with an outside ball from Steele to Scott on the touchline and the No. 3 barrelled through a last, despairing tackle to battle his way over the line for the try. The officials, initially, went into ‘consultation mode’, but the try stood and Watsonians took the Ladies Cup 19 points to 14 and a historic victory.