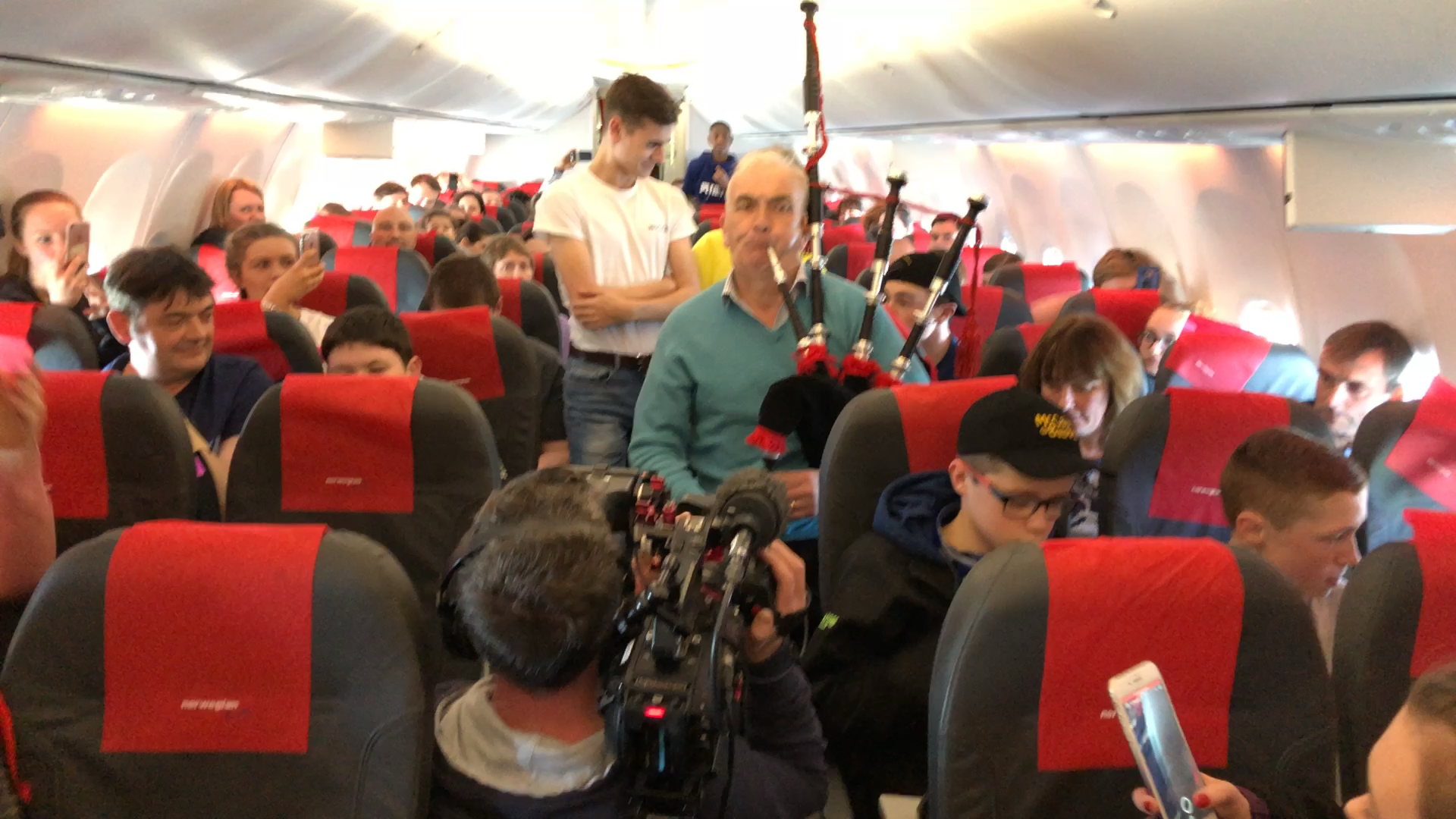 The Norwegian Airlines flight from Edinburgh Airport to Stewart International New York was some 36,000 feet above the Atlantic when it was filled with the skirl of the bagpipes. “Ladies and gentlemen, we are about to have some in-flight entertainment from Donald Ban.”

Following their successful fundraising campaign last year, the first Western Isles pipe band to play at Tartan Week were finally en route for the Big Apple, with a travelling party of 42 including their piping instructor Donald Ban McDonald and his wife Mrs Esther MacDonald. So some of the audience were already admirers of the piper.

The young members of the Sgoil Lionacleit Pipe Band are taking New York by the scruff of the neck with an itinerary that is not for the faint-hearted. They began their 4,000 mile journey by coming to Edinburgh by road a day early in view of the wintery conditions, and caught the direct flight to the US from Edinburgh Airport on Wednesday afternoon.

JohnDaniel Peteranna who is travelling with the band, and whose company Energee is one of their main sponsors,  said : “We are going to New York to take on Tartan Week! This is the first island band to go to Tartan Week. Some of the kids have never been on a plane before, far less out of the country, far less to New York. Bring it on!”

We spoke to JohnDaniel in the departure lounge at Edinburgh Airport before the flight left :

According to the itinerary I saw, the band will visit Ground Zero, Carnegie Hall, Central Park, the Statue of Liberty, Ellis Island and the American Museum of Natural History with a few gaps for eating and sleeping.

On Friday they will play in Bryant Park when the Declaration of Arbroath will be read out on National Tartan Day, 6 April, all leading up to the highlight of their visit, marching down Sixth Avenue in the Tartan Week Parade. They have three Highland dancers with them who will dance to the music produced by the McCallum bagpipes,  two bass drummers, two tenor drummers and six snare drummers.

The band is made up of 19 teenagers from 13-17 years old, and they have a few adults with them. They come from six islands in the Hebrides : Berneray, North Uist, Grimsby, Benbecula, South Uist and Barra.

The young people all come to Sgoil Lionacleit in Benbecula for their schooling, some of them having to stay over in Benbecula at weekends for band practice.

Wearing their own tartan, a specially created design by Kathleen and Robert Ferdinand of Celtic Clothing in Stornaway, they will be most distinctive in their school colours of red, black and white.

This year’s Grand Marshal of The New York City Tartan Week Parade is KT Tunstall the Scottish singer, originally from Fife and who now lives in the US.