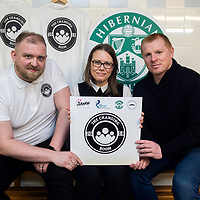 Yesterday marked the kick off of ‘The Changing Room’ a unique project which uses the power of football to bring men aged 30-64 together, encouraging them to take action on their mental health and wellbeing.

The Changing Room is a two-year pilot SAMH project working with Scottish Professional Football League Trust (SPFL Trust) and Hibernian Football Club to engage with men in the heart of their community, to take action for their mental health.

This is the first mental health project to be funded in Scotland by the global men’s health charity, Movember Foundation.

The first group of men in their middle years to take part in the programme will meet at Easter Road once a week, for 12 weeks to start positive conservations about mental health.

At an event held at Easter Road stadium, Hibernian head coach Neil Lennon, who has previously spoken about this own mental health struggles, kicks-off The Changing Room programme.

He said: “I’m delighted to support The Changing Room. It’s a great opportunity to promote positive mental health and wellbeing, and I’d encourage men to get involved in this programme that could be the kick-start to something new in their lives.”

We know that men are in trouble. They are two-and-a-half times more likely than women to die by suicide each year with the biggest group at risk being men in their forties and early fifties*.

Men aren’t great at talking about how they feel, and we know that talking is one of the first steps to better mental health. Without talking, opening up and taking action, nothing will change.

Jo Anderson, SAMH Director of External Affairs says: “In talking to men we learned that large numbers in their middle years struggle to talk about their feelings, their mental health and how to ask for help.

“Working alongside Scottish Football Clubs, such as Hibernian and using the power of football we will bring men together in spaces that they associate with, trust, and feel they belong.

“We hope by starting conversations about mental health that The Changing Room will make a real impact to the lives of those who take part.”