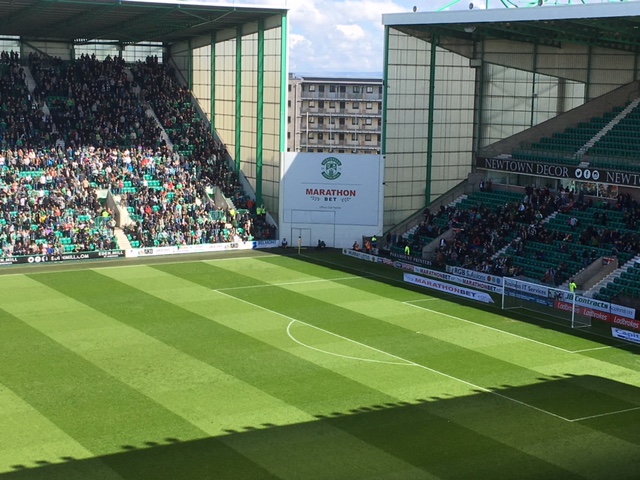 Hibs emerged victorious after a pulsating 90 minutes against on-form Kilmarnock in the glorious sunshine on Leith this afternoon.

Darren McGregor and Scott Allan replaced Danny Swanson who dropped down to the bench and Dylan McGeouch who missed the game due to a face injury.

The visitors had an early penalty claim when Jordan Jones went down under a challenge from McGregor but the referee waved away their appeals.

Gary Dicker was shown a yellow card for a bad challenge on Martin Boyle then moments late Alan Power suffered the sae fate for blocking a John McGinn run.

Power then should have been sent off for a reckless challenge on Lewis Stevenson but unbelievably referee Don Robertson decided that a free kick was sufficient punishment, much to the fury of the home supporters.

Hibs took a deserved lead in the 29th minute when Efe Ambrose found Scott Allan on the edge of the box. the midfielder then played a delicate one-two with Florian Kamberi before firing the ball into the net from an acute angle.

The referee further annoyed the Hibs fans by not booking Aaron Tshibola for a dreadful challenge on Martin Boyle as play raged from end to end.

Kilmarnock equalised in the 32nd minute when Jones’ cross was headed into the net by Kris Boyd from close range with the Hibs defenders claiming for offside.

Tshibola then hauled back McGinn but once again the referee failed to book the Kilmarnock player and he was roundly booed off the pitch at half time by the disgruntled fans.

Killie boss Steve Clarke watched the second half from the stand after a confrontation with the referee at the break although it was Lennon who had more cause to be angry with the official.

Hibs took the lead in spectacular fashion in the 53rd minute when Steven Whittaker volleyed home a McGinn cross but Kilmarnock equalised seven minutes later when Stuart Findlay hooked a Jones’ cross from the left into the net.

Jamie MacLaren restored Hibs lead in the 63rd minute when he fired another inch perfect McGinn cross past Lee Fasan into the bottom corner of the net.

McGregor almost made it 4-2 moments later but his header from McGinn’s corner flew inches wide.

MacLaren was then replaced by Brandon Barker and left the field to a deserved standing ovation.

The referee then awarded Hibs a penalty after Kamberi went down inside the area but changed his mind after speaking to the linesman, sparking outrage from three sides of the stadium.

Hibs made it 4-2 in the 75th minute when Allan slid a superb pass into the path of Kamberi who fired the ball under the keeper into the net.

Killie did not five up though and pulled one back five minutes later when Boyd fired a 30 yard free-kick into the top corner of the net, setting up a nail-biting last ten minutes.

The visitors thought they had equalised just before the end when the ball rebounded off Paul Hanlon into the net but the linesman’s flag was raised as Boyd was offside during the build up.

In time added on, Kilmarnock pressed forward but substitute Swanson won possession and slid the ball to Barker. The on-loan winger ran 60 yards with the ball, cutting in from the left before firing the ball past Fasan from 10 yards to secure the three points.

Both sets of fans gave the players a deserved standing ovation at the end of the game and the result means that Hibs can not be overtaken and will finish at worst fourth in the table.