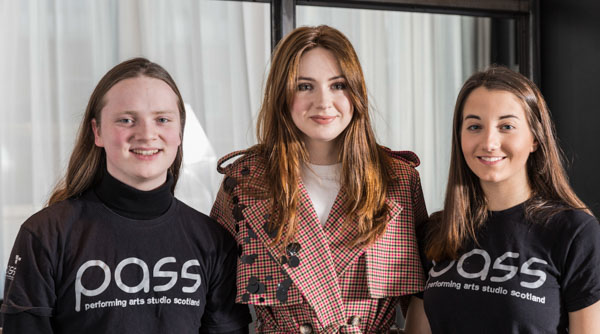 Scottish actor Karen Gillan has become the patron of Edinburgh College’s Performing Arts Studio Scotland (PASS), replacing Emma Thompson who took up the roll in 2013. The actor trained there as a student before launching a career that has brought her worldwide acclaim and box office success.

As patron of performing arts, Karen will support the college’s students by coming to the college to give talks and masterclasses, and sponsoring an award at the college’s annual student Prize Giving Ceremony.

Karen studied acting at PASS at Edinburgh College from 2004 to 2005. Since graduating, she has gone on to star in Dr Who, Marvel’s Guardians of the Galaxy films, the upcoming Avengers: Infinity War and the Jumanji sequel. She has also turned her hand to writing and directing. Her directorial debut The Party’s Just Beginning, which she also wrote and stars in, had its premiere at the Glasgow Film Festival last month.

The Inverness-born actor has returned previously to Edinburgh College to give acting students insight into her career and advice about their own professional development.

Karen said: “I feel incredibly honoured to become Edinburgh College’s patron of performing arts. I had such a brilliant time there and it’s so cool to still be involved in the college, where I had the best training I’ve had as an actor so far.

“I’m really looking forward to working with the college and supporting students to develop their talents and careers.”

Acting lecturer Scott Johnston, who taught Karen and has stayed in close contact as her career has developed, said: “It’s great that Karen has agreed to become patron of PASS and we’re looking forward to her meeting our students when she gets a break in her hectic schedule.

“She is a courageous actor who is equally happy on stage or on film in front or behind the camera, and she’s a great role model for our students. Karen’s shown that it’s possible to have the ambition to succeed on the biggest stages possible while retaining integrity and humility. Now she’s also moving into writing and directing there’s even more that students can learn from her.”

Acting and Performance student Sam McDonald, who interviewed Karen in Glasgow for the college recently ahead of the premiere of The Party’s Just Beginning, said: “Meeting Karen was a pleasure and having her as our new PASS patron is exciting because it shows our students, past and present, the possibilities that can be achieved from hard work and dedication.”

The college hopes that Karen will be able to come to PASS this year to meet students and follow this with a series of visits. She is also the sponsor of the Karen Gillan Award for Performing Arts, given to the top-performing student at the college’s annual Prize Giving Ceremony for further education students.