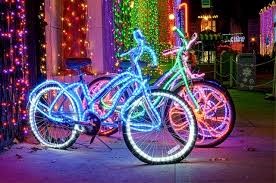 The City of Edinburgh Council has postponed the GlowRide planned for this Sunday evening until later in the month or early April. The purpose of the ride is to celebrate Edinburgh becoming Scotland’s first 20mph city which happens on Monday 5 March when the 20mph limit extends to South Edinburgh. It will include areas like Colinton, Swanston, Oxgangs, Fairmilehead and Greenbank.

This is the final phase of the council’s plans to make us all slow down. From Monday all residential, shopping and city centre streets will be 20mph with other roads set at 30mph and 40 mph.

Statistics promoted by the council suggest that a person is seven times more likely to survive if they are hit by a car driving at 20mph than at 30mph.

Polica Scotland say that they are enforcing the limit, although we feel that anecdotal evidence suggests that more could be done in this regard. Since 31 July 2016 more than a thousand drivers have been caught speeding in the city. At least 55 tickets have been issued and 960 warnings given. 11 people have been reported to the Procurator Fiscal.

Councillor Lesley Macinnes, Transport and Environment Convener, said: “This is a very significant milestone for the Capital. From Monday 5 March, Edinburgh will officially be Scotland’s first 20mph city, with calmer speeds on all our roads other than a strategic network of 30mph and 40mph streets.

“Calmer speeds not only improve safety and encourage more people – especially young families – to walk and cycle; they also boost local communities and combat loneliness by making people more comfortable spending time out and about in their area, stopping to chat to neighbours and enjoying reduced traffic noise.”

The city-wide roll out of the 20mph in  Edinburgh has received Scottish Government funding through Sustrans Scotland’s Community Links programme.

Sustrans Scotland Community Links Manager Dave Keane said: “There is no doubt, and ample evidence worldwide, that 20mph streets are a vital step to keep towns and cities thriving. Lower speeds on roads help reduce the risk and severity of collisions and make local neighbourhoods more pleasant environments in which to live, shop, walk and cycle.

“By reducing speed limits, building good quality cycling and walking networks and improving the layout of streets, even more people will choose to cycle and walk for more of their everyday journeys, benefiting themselves and the environment in which they live.”