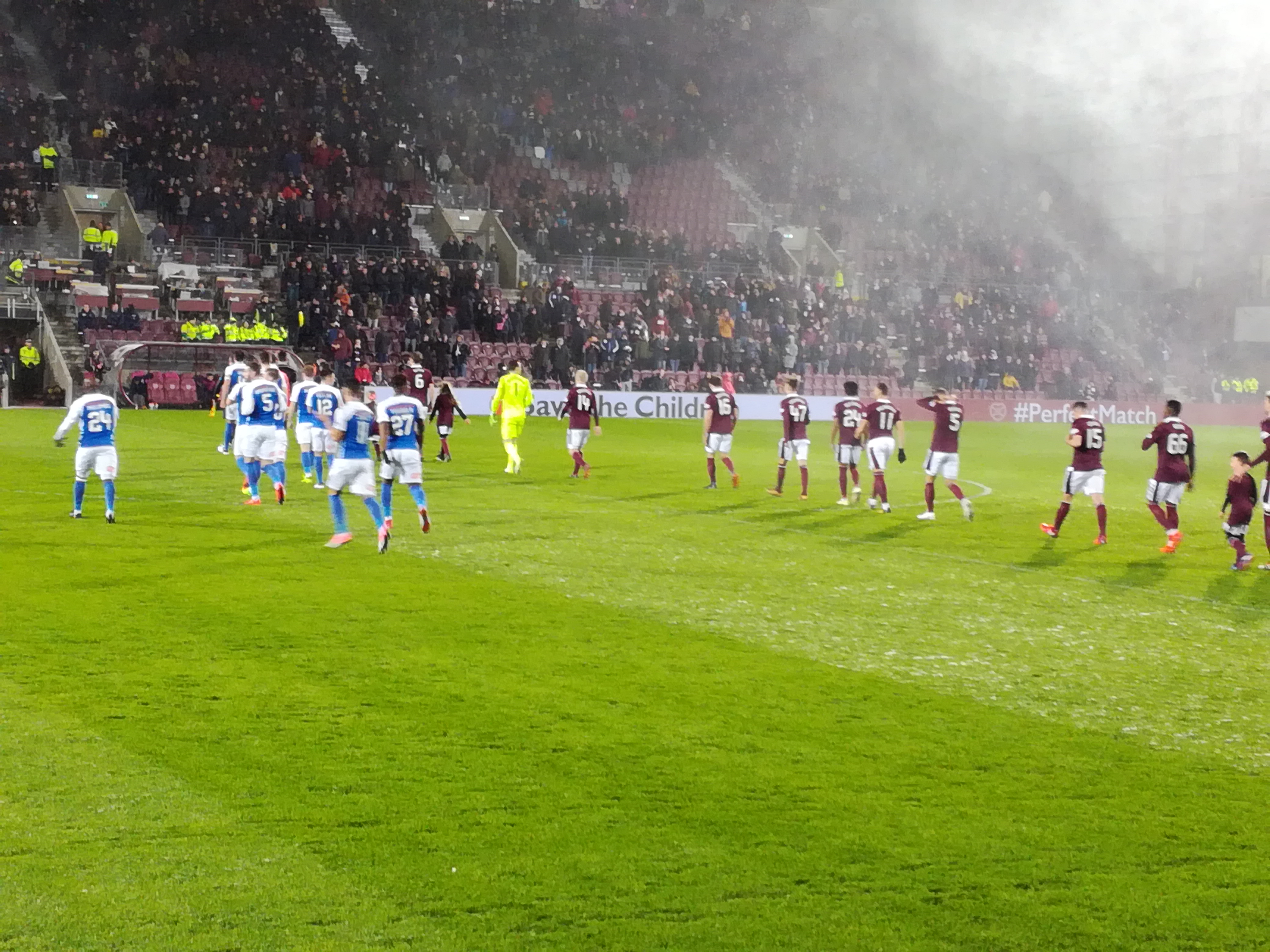 Hearts threw away a gilt-edged opportunity to take all three points from their Ladbrokes Premiership encounter with Kilmarnock at a snowy Tynecastle Park on Tuesday evening. With the game on a tightrope with the score at 1-1, striker Kyle Lafferty missed a last-minute penalty kick, his effort being saved by former Hearts keeper Jamie MacDonald.

With the so-called ‘Beast from the East’ cold weather front from Siberia hitting Scotland, Police Scotland are rightly telling people only to make journeys if absolutely necessary. Tuesday evening saw Hearts play at home so more than 15,000 hardy souls braved the snow and sub-zero temperatures to back their team – supporting their team is absolutely necessary, officer…

Hearts Head Coach Craig Levein hinted at changes pre-match and he made four from the team that performed so meekly at Ibrox on Saturday. Don Cowie, Steven Naismith – playing against his former team – Connor Randall and David Milinkovic came into Hearts starting eleven but there was another injury blow for Hearts when John Souttar missed the game because of a hamstring problem. A disappointment for the former Dundee United defender and for new Scotland manager Alex McLeish who was watching from Tynecastle’s new main stand.

With snow and a biting cold wind swirling around Tynecastle the game kicked off with the visitors grabbing the initiative and they were ahead within two minutes. The impressive Mulumbu won the ball far too easily in midfield and sent a long pass forward to Brophy. Hearts captain Christophe Berra got to the ball first but with tricky conditions underfoot only succeeded in setting up the Killie striker who fired the ball past Jon McLaughlin.

Not the start the shivering home support wanted.

It was all Kilmarnock in the first ten minutes and the evening began to take on a ‘I wish I had taken police advice and stayed at home’ feel about it. However, Hearts gradually showed their character and dominated the rest of the opening half.

Kyle Lafferty tried a long-range effort that was never going to seriously trouble a goalkeeper of MacDonald’s quality. But Hearts hauled themselves level in the 27th minute.

David Milinkovic crossed from the left and after a deflection the ball bounced kindly for Steven Naismith to head home and open his scoring account in a maroon shirt. It speaks volumes for the Scotland striker that, rather than do an elaborate goalscoring celebration all too prevalent in England, Naismith immediately went to Harry Cochrane to offer some encouragement, the 16-year-old having given the ball away moments before.

Kilmarnock had opportunities to go back in front when Jones was thwarted by a Christophe Berra tackle before McKenzie blazed the ball into the Gorgie Stand when he had time and space to do better.

It was Hearts, though, who almost went ahead just before half-time. Joaquim Adao set up Kyle Lafferty who prodded the ball past keeper MacDonald. It looked like it was going in, but Taylor cleared it off the goal line.

One must give credit to both sets of players who did their best to play football in trying conditions in the second half. The snow became heavier, the pitch slippery and the fans quieter, no doubt thinking about getting home to a nice warm bed and a cup of cocoa to help them thaw out.

Killie had the best chances from open play in the second period, but they found Hearts history-making goalie Jon McLaughlin in top form – as so many other teams have also found this season. The Hearts number one thwarted Erwin before producing a spectacular one-handed save to deny Jones.

Hearts had the chance to claim all three points right at the death when Mulumbu tripped Kyle Lafferty inside the penalty box. In fairness it looked a soft decision to award a penalty kick so perhaps justice was done when MacDonald produced a superb save to keep Lafferty’s low shot out.

“We started the game really poorly and we gave Kilmarnock a bit of hope. All credit to the players, they fought their way back into the match and I thought the second half was much better. To get a chance like that, a last-minute penalty, I felt the game was won.

“Our defence was not as solid as it has been; we got caught on the counter a few times.

“Tonight, the overriding feeling is of disappointment that we didn’t take three points when they looked like they were in the bank.”