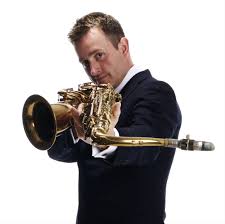 Smith formed the group in February last year to mark two fiftieth anniversaries – his own fiftieth birthday and the half-centenary of the death of his greatest inspiration, jazz icon John Coltrane – and the response it has received has been outstanding.

Its first album, Embodying the Light, met with glowing reviews on its release in July, with The Scotsman describing its mix of Coltrane favourites and Smith originals as an “outstanding achievement” and The Herald’s Keith Bruce declaring it “Absolutely top drawer: fluid, articulate, commanding and constantly surprising.”

Following an ecstatically received sold out concert at Edinburgh Jazz & Blues Festival 2017, the group toured the UK and drew a capacity crowd to the world famous Ronnie Scott’s jazz club in London.

The quartet features two of Smith’s protégés from his youth orchestra, pianist Peter Johnstone, who was the Young Scottish Jazz Musician of the Year in 2012, and bassist Calum Gourlay, who now features regularly with the Scottish National Jazz Orchestra. On drums is the hugely experienced Dutchman Sebastiaan de Krom, who has previously worked with Herbie Hancock and Jamie Cullum.

In concert they play without amplification, a policy Smith also favours when working with his long-time duo partner, pianist Brian Kellock

“I’ve nothing against amplified music,” he says. “My previous band, Karma, played loud, powerful electric jazz-rock. With this group, it just feels more natural to play acoustically. It makes us listen to each other more carefully and the audience gets to hear the true sounds of the instruments and the band.”

Tommy Smith Quartet: Embodying the Light will be onstage at the Queen’s Hall at 7:30pm.