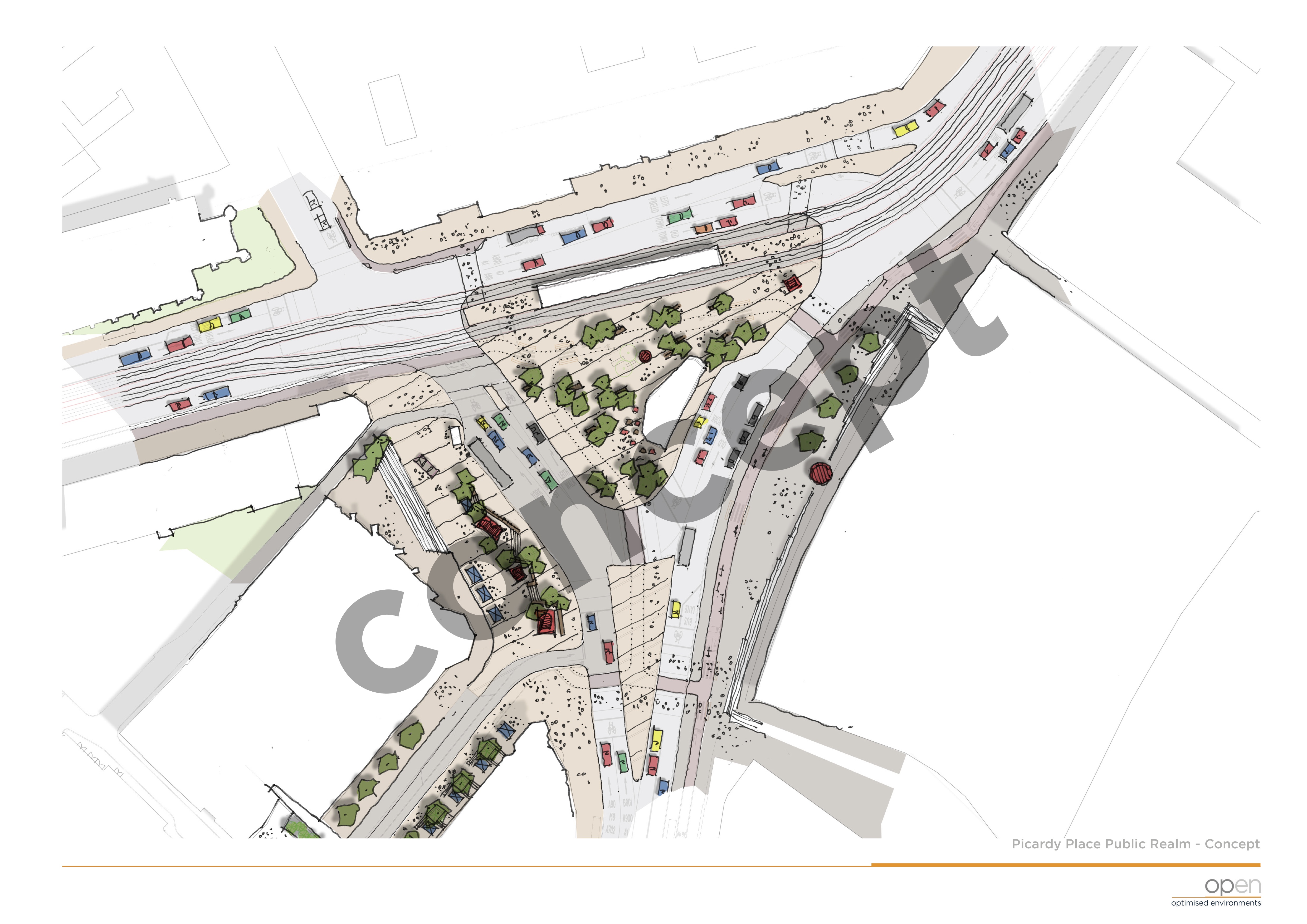 The council is to put forward a revised plan for the new look Picardy Place to a special meeting of the Transport Committee due to convene on 25 January 2018.  They hope that the reconfiguration will provide for transport needs, and that it will enhance both pedestrian and the ‘civic’ environment. The council says that the redesign will reduce carbon emissions as it promotes the use of public transport and active travel.

The new look roundabout is however still a roundabout, and the council is quite clear that it could not step back from that, otherwise it would be in breach of the three-way contract by which the Edinburgh St James Development is being funded. (The Growth Accelerator Model or GAM). Leith Street will be reopened to all traffic ahead of this year’s Festival and all current diversions will be reversed. No mention is made of public support for keeping the street closed, even to car traffic.

The changes will cost the council an additional £1.5 million, partly as the central island will no longer be sold.

Previous proposals to commercially develop the island site on the middle ‘island’ have been shelved. (Some thoughts mooted were to sell it as a site for a hotel or a shopping area.) This will now form a public realm space (at least for the moment).

While the finer details of the actual look have yet to be made public this new design, if agreed by councillors, will allow works to begin quite quickly. The council is simultaneously consulting on the transformation of Central Edinburgh. The report  mentions that the redesign of Picardy Place is flexible enough to allow for future proofing and integration into any redesign of other streets nearby.

There will be a direct two stage pedestrian crossing outside The Playhouse with a taxi rank outside the Omni Centre and more direct pedestrian crossings from Leith Street bus stops and Greenside Car Park into the new development.

The ban on vehicles turning left into Broughton Street from York Place will remain, despite objections to its removal.

The council concedes that this is a critical junction as a gateway to the two UNESCO World Heritage sites of the Old and New Towns, and have also conceded that the area to the front of St Mary’s Cathedral should be made a more valuable public space. Part of the problem with the previous plan was that it would not have allowed funeral corteges and wedding parties any space to stop outside the cathedral.

The Paolozzi sculptures which until the end of 2017 were sited there will be returned to the area (although the exact location will have to be agreed) when work has finished. The sculptures were donated by Sir Tom Farmer to the city.

Interestingly there are only a few mentions of the Sherlock Holmes statue being returned to its original site, although Paolozzi is regaled at length. There is also mention in a couple of places of the Leith Stones which will also be returned.

When the council published its new plans in Autumn last year the public outcry forced them to have a rethink and a period of public consultation.(Councillor Chas Booth also ensured this process was made more democratic by tabling a motion).

This step had been omitted from the previous procedure despite the fact that there have been five reports to council between May 2014 and March 2016. Such was the interest in this important junction that over 1000 individuals responded to the council who now say they have taken many of the concerns into account.

There are many pedestrians who use the area, and in excess of 100,000 bus passengers pass through Picardy Place on any day. There will now be a tram stop too if the tram completion is given the go ahead, allowing for a public transport interchange.

We ran a live blog on the issue of Picardy Place along with The Broughton Spurtle on 12 December 2017 to try and get as much information into the public domain as possible.

The council assures us that the new plans will reflect in particular a desire for the public areas to be much improved. There will be increased pedestrian space outside St Mary’s RC Cathedral and at the foot of Little King Street adjacent. There will also be a bus stop outside the cathedral.

Arrangements for cyclists and pedestrians across the whole space have also been incorporated into the new design as far as possible. Less space is given to motorised traffic than previously, and there will be segregated cycleways linking York Place, Leith Walk and Leith Street. With wider pavements outside the Omni Centre and on the north side of Picardy Place as well as shorter crossings for pedestrians they hope that the changes will largely meet with approval of the public.

The report states that the twin priorities of providing appropriate public space and keeping the junction moving have to be balanced.

The main points are these:

The council claims that the new arrangements will both improve the public realm and ensure that public transport works effectively both now and in the future.

If the tram line completion is given the go-ahead later this year then the York Place tram stop will be dismantled and a new tram stop created at Picardy Place.

The additional cost to the council in making these amendments to the design is estimated at £1.5million.

As the new arrangements affect the Growth Accelerator Model or GAM which the council entered into with Hendersons and with The Scottish Government, the plans will also require overall approval of the full council at its next meeting at the beginning of February. The financial implications will be considered at a full meeting of the council on 1 February 2018.

Transport Convener Councillor Lesley Macinnes said: “I believe this design addresses many of the concerns that have been raised and gives a balanced solution to competing demands from residents, businesses and stakeholders.

“What we’re seeking to achieve – and which I believe we’ve managed to do successfully here – is to make the area much more pedestrian and cycling friendly while also ensuring this key junction operates efficiently for our public transport network.
“We need it to be an attractive and well-functioning gateway to Edinburgh’s Old and New Towns World Heritage Site and one which gets the balance right for all road users, whether they’re on foot, cycling or using public transport.
“Creating a new public space in the island site and reimagining the space outside the Cathedral will breathe new life into the whole area, making it much more pleasant to spend time in or travel through.” Nigel Serafini, Commercial Director of Lothian Buses, said: “Every day we have over 2,000 bus journeys travelling through the Picardy Place junction, which equates to in excess of 100,000 customer movements. This is a significant share of our total daily customer movement.
“Picardy Place is a critical interchange point not only for bus but for other modes of transport catering for traffic from the North and East of the city into the centre. We welcome the work that the City of Edinburgh is doing in order to develop the area, building transportation and travel of all types into place and planning design, in order to futureproof this area, whilst vastly improving the public space.”
The Transport Convener explained to us that there are still two stages before this plan can be implemented, but she confirmed that as soon as the council does give its approval then the work can begin quite quickly.

She said : “The outline plans are now published and clearly we have gone to pretty strenuous efforts to accommodate all the competing needs. That was the feature of my decision to halt progress and hold a public consultation, and then what has emerged out of that and our response to it.”

Councillor Macinnes confirmed that the final details of the public realm areas will be worked out once the principles of the design and space are agreed by the council.
She continued : “There is a clear commitment from the council that this will be very high quality, very well thought through and designed to incorporate all the potential that there is in the public realm space.
The convener explained that the relationship with the developer is ongoing and so there is every possibility that the work can be done quite quickly, although the final details are still to be agreed.
She also confirmed to The Edinburgh Reporter that there have been extensive discussions about the Paolozzi and Sherlock Holmes sculptures which will be given appropriate locations in Picardy Place.