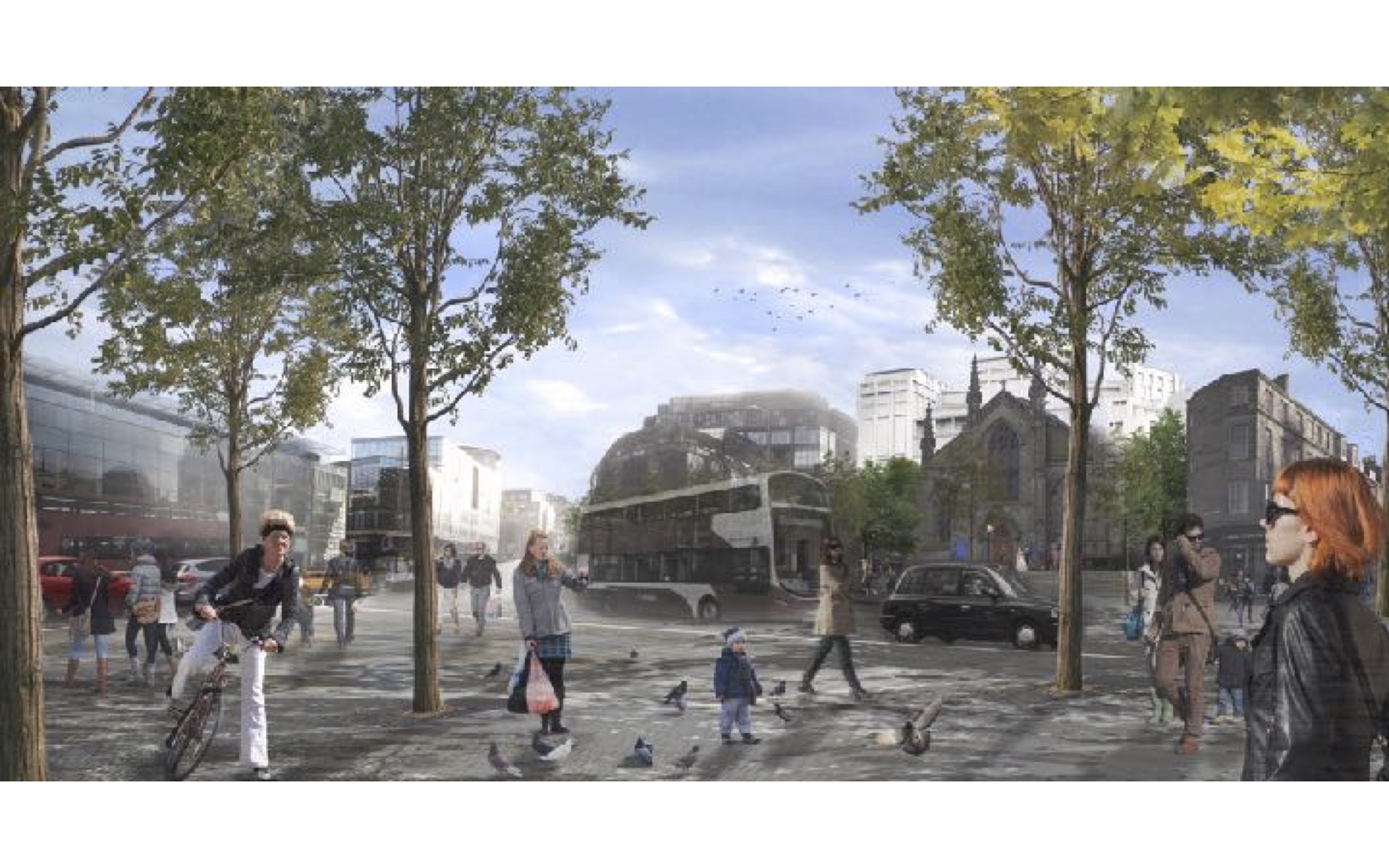 The specially convened Transport & Environment Committee was a busy place this morning. The public gallery was full and included the Chief Executives of Edinburgh Trams and Transport for Edinburgh (who did not actually speak to the meeting. It appears theirs was a listening role.)

The meeting was conducted in a very even manner by Transport Convener Lesley Macinnes and the tenor of all the deputations was equally well-mannered. There was no shouting from the public gallery as we have witnessed before, although this is a matter which people are quite passionate about. Spokes the cycling campaign group, Picardy Residents Group, local councillor Joanna Mowat and representatives from St Mary’s RC Cathedral all had their chance to speak to the meeting.

It appeared to us that this was a done deal before the meeting got underway, and eventually the committee of 11 voted for the recommendation in the report to proceed with the revised design.  But this leaves final decisions to the Chief Executive under what is known as ‘delegated authority’ to agree and authorise the exact terms. There is also a requirement for the full council to approve the additional cost of £1.5 million which they will be asked to do next week.

Transport Convener, Councillor Lesley Macinnes, said: “I am pleased that we have been able to take a step towards the redevelopment of Picardy Place today, with the approval of a design which I am confident takes into account the desires and concerns of the many people who took the time to give us their feedback.

“We’ve worked hard, in consultation with residents, businesses and stakeholders, to hone plans which, I believe, achieve a much more pedestrian and cycling-friendly area while also ensuring this junction operates efficiently for our public transport network.

“By developing a public space in the island site, as well as enhancing the space outside the Cathedral, we’re giving new purpose to this location. We look forward to working with key stakeholders to develop more detailed designs for this area, creating a much more pleasant experience for people to spend time in or travel through.

“This is a key junction leading to the heart of the city, welcoming people to the Old and New Towns World Heritage Site and the wealth of attractions on offer. It’s essential that we get the balance right here for all road users, whether they’re on foot, cycling or using public transport, and now I’m glad we will be able to move forward to accomplish this, as part of the Central Edinburgh Transformation project. But rest assured, the conversation around this pivotal development will continue, as we further refine the design to best suit the needs of the public.”

We spoke to Councillor Macinnes after the three hour meeting :

There are a couple of things worth noting.

There is no final plan as yet. The details still have to be worked out, the final say will rest with the officers at the council under delegated authority to the Chief Executive and this matter is unlikely to come back to a Transport Committee as far as we know.

But the Transport Convener has said there will continue to be a conversation with stakeholders.

Could Picardy Place look like this? This image from open Optimised Environments was used as a proposal to show the possibilities during the meeting : It appeared to us that the Conservative members of the committee had been well briefed by their colleague the City Centre councillor Joanna Mowat. As one they all suggested that the traffic which would otherwise be using Picardy Place and Leith Street right now while it is closed has been displaced to the Royal Mile. So they could not countenance any future closure of Leith Street to reduce traffic here.

Councillor Mowat expressed that same view to us herself before Christmas, and it is one which is entirely refuted by the Green Group.

In asking both for a delay in making any decision and that the democratic process for this decision be reviewed by the council’s governance committee, Green Party Councillor Chas Booth pointed out that traffic is currently reduced in the area. He said : “The evidence is that a number of people have chosen a different mode of travel or a different time to travel which means that it does not impact on surrounding streets

“We believe the evidence for closure of Leith Street is a strong one.

“We are trying to implement our policies of moving people out of cars onto other modes of transport and do whatever we can to reduce the displacement of traffic onto surrounding streets.”

Labour Councillor Maureen Child replaced Councillor Scott Arthur at today’s meeting and voted with the administration. We do not imagine he would have voted for the gyratory model as he has already been fairly vocal about what he thinks. His article clearly setting out his position is here.

One of the council officers who addressed the meeting said that a gyratory scheme was both flexible and adaptable for future traffic needs. He also said that even though the council has published targets on road share across the city, with cycling increasing and car use decreasing, the council has to have a range of policies to deliver that across the whole city.

But he said that the council ‘cannot apply that to every point in the city’ so it was no use trying to reduce traffic at Picardy Place alone.

One interesting suggestion from Ben Palmer at open Optimised Environments who presented to the meeting was to have a Fourth Plinth as they did in Trafalgar Square. Now all we need is suggestions….

Paul Lawrence who is the council’s Director of Place said that the contract (the Growth Accelerator Model or GAM) which governs the funding of Edinburgh St James is simply that, a contract. It would mean renegotiating terms of it if the gyratory model was to be scrapped. But he said there is nothing complicated about it. It is just a contract among three parties.

Previously we had been told that any amendment to the terms of the GAM might involve the council in up to £20 million of extra costs. It appears that might not be the case,  although no figures were mentioned today. Lawrence said : “It has always been the case that there are lots of competing issues, but we have two objectives. We want all the various modes of transport to be able to operate effectively and efficiently in line with the council’s Active Travel policy and to ensure more people use public transport.”

The administration supported the recommendation in the report to just get on with the work at Picardy Place and that as soon as possible while Leith Street remains closed till the end of July 2018. Work may start within the next six weeks.

The Greens in the form of Councillors Chas Booth and Steve Burgess lodged a lengthy amendment to the recommendations in the council report which was in the end thrown out by 9 votes to their 2. Cllr Booth pointed out that if city has an aim to reduce traffic and to transform the city centre, then a gyratory is not required. It is the council’s stated policy that they wish to reduce vehicle use in the city and cause what is called modal shift – moving people to public transport.

All of this is subject to formal approval by the full council next week on 1 February since it will mean an additional cost to the council of £1.5 million. The reason for this is very simple. The council have had to withdraw any plans for either selling off or leasing the area in the middle for any development purposes. (We understand that part of that land is common good land which would require parliamentary approval before sale in any event).

There were two public consultation events on this important junction towards the end of last year, when council officers were available to speak to the fairly roughly drawn layout plans which were shown then. The same council officers were present today and while they do not all agree that there should not be development on the site, they all believe the gyratory model is best.

Some discussion about which design of tram stop would be adopted is of course premature since the decision to finish the tram line has not yet been made. There is no final plan as yet. Ben Palmer from open Optimised Environments who act for THRE the developer of Edinburgh St James shared some potential and possible scenarios with the meeting this morning following five objectives :

The area at Picardy Place has grown larger with time. We were shown images of the junction many years ago when it was much smaller than it is today.

But then it is that space which offers such potential and that is why so many people were keen to have their say during the consultation process.

The fated kinetic sculpture was one incarnation, but we have to hope for better than that (it was fenced in so did not even allow for pedestrians to cross the area using that central space.) It is quite important to point out that the Convener ended the committee meeting by saying the conversation will continue, endorsing that these are by no means final plans. If you are so minded then you may continue to have your say in this debate.

Living Streets who area a local walking campaign group said that The City Council decision to back the controversial Picardy Place gyratory roundabout will be a ‘continuing embarrassment’ to those Councillors who approved the plan.
The group criticised the decision giving the green light to what the walking campaigners describe as ‘a 1960s’ solution to a 21st century problem’.
Living Streets Edinburgh Convenor, David Spaven, commented: ‘Councillors – other than the visionary Greens – have backed a fundamentally flawed plan, which runs completely counter to the Council’s own transport policies. We now face the deplorable prospect that the Council’s design will make the Picardy Place and Leith Street even worse for pedestrians than it is at present. This will surely be a continuing embarrassment to these councillors, unless big changes are made to the detail of the design in the months ahead.
‘We will be pressing strongly for design improvements by Council officers to reduce the negative impact of more circuitous road crossings, narrower pavements and  cycling /walking conflicts where new cycleways bisect pavements.’
Thank you to open Optimised Environments for sharing their images with us.

In case you have not yet seen any of the discussion on Twitter we have compiled some of the many comments for you. It has to be said that all of these take the view that  a gyratory is the wrong move. This does not mean that those in favour don’t use Twitter as a method of getting their message  across, it is simply that these are the views on that medium about this subject.