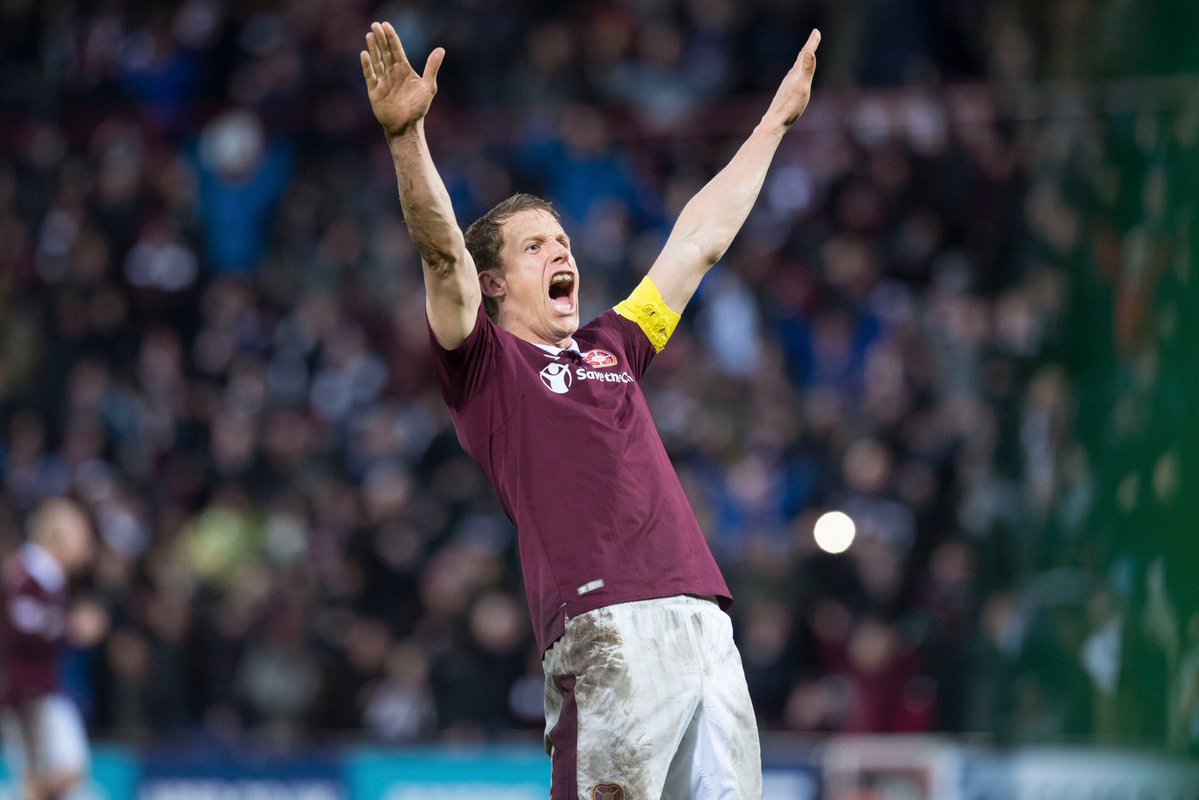 The Edinburgh Reporter’s John Hyslop and I strive to bring the best possible coverage of all things Hibs and Hearts. While John covers Hibs and I cover Hearts, we have an agreement that whenever the two clubs meet, John will write the match report if Hibs win while I pen the report if Hearts triumph. It’s fair to say that, recently, it’s been John doing all the hard work as Hibs have embarked on a nine-game unbeaten run in the Edinburgh derby.

Tonight, however, I am delighted to bring you the match report from this afternoon’s William Hill Scottish Cup Edinburgh derby at Tynecastle Park which saw – wait for it – Hearts triumph thanks to a late goal from veteran midfielder Don Cowie.

As expected Tynecastle Park was packed for the third Scottish Cup meeting between these sides in two years – not including the replays required in 2016 and 2017 when Hibernian won after drawing the first games in Gorgie.

Hearts had new loan signings Steven Naismith and Demetri Mitchell in their starting line-up as Head Coach Craig Levein made four changes to the team that drew at Aberdeen on the penultimate day of 2017. As well as the new signings, Connor Randall and Aaron Hughes returned to the Hearts starting line-up.

It was almost a dream start for Naismith. After just four minutes, the on-loan Norwich City forward ran on to a fine pass from David Milinkovic, rounded Hibs keeper Marciano and looked set to score – only to see his shot trundle past the post.

Arnaud Djoum then had a chance after 16 minutes but his shot at goal lacked power and Marciano saved easily.

Seven minutes later, Hibs had a great chance to open the scoring. Oli Shaw, denied a goal during the last meeting of these two sides in Gorgie just after Christmas, delivered a fine cross from the left which was headed on by Vykintas Slivka towards Martin Boyle. The Aberdonian seemed sure to score at the back post but he contrived to miss the target from close range and the chance was gone.

Hibs were looking as if they might take command as the first half wore on and John McGinn held off his marker before setting his sights on goal. However, the former St Mirren player slipped, and his shot sailed into the Gorgie Stand.

Hearts dragged themselves back into the game and in the 33rd minute David Milinkovic’s chip found Isma Goncalves, but his shot was saved by Marciano.

Arnaud Djoum was next to threaten for the home side but shot wide before Martin Boyle had a chance for the visitors but Hearts keeper Jon McLaughlin saved well.

It had been a frantic opening forty-five minutes.

Hearts had the first real chance of the second period when Steven Naismith’s free-kick set up fellow debutant Demetri Mitchell but the Manchester United full back screwed his shot wide.

However, Mitchell came closer four minutes later. Goncalves cross found the loanee in acres of space and he fired in a superb volley which Marciano saved brilliantly.

It was end-to-end stuff on a difficult playing surface which hadn’t been helped by a heavy snow shower shortly before kick-off.

Hearts captain Christophe Berra – an inspiration throughout – then had a chance in the opposition’s six-yard box but it was a defender’s finish and his shot was straight at Marciano.

With five minutes to go it seemed Hibs were about to repeat their Scottish Cup success over their city rivals when John McGinn’s free-kick found Martin Boyle who hit a first-time effort towards the roof of the net. However, he was thwarted by a quite breath-taking save from Jon McLaughlin who pushed the ball over the bar to the anguish of the Hibs players and fans.

Their anguish was compounded two minutes later when Hearts scored the goal that would take them through to the next round and eliminate their rivals from the competition.

Sixteen-year-old Harry Cochrane delivered a fine corner from the right which was met by the head of captain Berra. His header took the merest of flicks from Don Cowie and spun over the goal line despite frantic efforts from John McGinn to clear. Referee Kevin Clancy looked to his assistant who signalled correctly that the ball had indeed crossed the line – and Tynecastle rocked.

Mr Clancy blew the final whistle after more than four minutes of stoppage time. Hearts had won and were through to the fifth round. For Hibs it was a bitter end not only to the game but to their Scottish Cup hopes for 2018.

“It was really important that we took advantage of the home tie and we won the game. We deserved to win the game.

“I love this fixture. I love this football club. When things aren’t going well, I feel it, so it was great today to get the win.”

“The addition of Steven Naismith will help in respect of another senior player who is serious about his football, who joined here recognising that part of the role was to help develop young players. He bought into that completely.

“Arnaud Djoum has been out injured for a long, long spell. We had a 16-year-old holding the middle of the field as well.

“There were a lot of things that made this difficult for us. The players were magnificent. Overall, we deserved to win the match.”

“You’ve got to be philosophical about it. I don’t think there was much in the game, as I expected.

“Both teams missed good chances early on and then Hearts maybe had the upper hand, but we had another good chance just before they got the corner for the goal.

“We were unlucky and it’s a very difficult pitch to play football on and it suits Hearts more than us, but we’ve adapted fairly well.

“I would like to congratulate my players because it is a hell of a derby run they have been on and to lose it so closely speaks volumes for their determination.

“We can’t win every game, but we’ll come again although it is a major disappointment to go out the cup.”

However, the recent bitterness between the two managers surfaced again after Levein said the end of a run of nine matches without a win against Hibs helped his intention to ‘restore the natural order of things’ in the Edinburgh derby. Levein’s derby record as a player and manager has seen him come out on top more often than not but his tongue-in-cheek commen didn’t amuse Neil Lennon.

Lennon told STV: “What is natural order? Hearts beating Hibs every time? I think that’s pretty poor. It’s disrespectful to my club, my players and me”

For a man who claimed Hearts current unbeaten run is a ‘misnomer’ because Hibs were denied a goal at Tynecastle in December, respect is hardly something he should lecture others about.

Hearts will now play either Albion Rovers or St Johnstone in the fifth round of the William Hill Scottish Cup at Tynecastle Park on the weekend of 10th/11th February 2018.