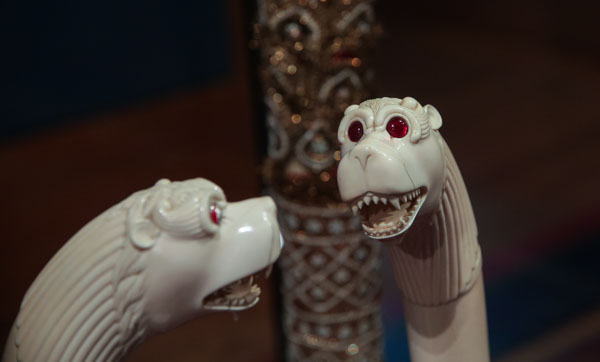 What did you bring back from your Gap Year? A rucksack full of rotting T-shirts? An embarrassing tattoo? Dysentery? In Splendours of the Subcontinent, a magnificent new exhibition at The Queen’s Gallery, Palace of Holyroodhouse, the Royal Collection Trust displays souvenirs of a very different nature. In 1875 a young man of great wealth and privilege was sent by his mother on a four-month tour of the Indian Subcontinent. At the age of 34 his predilection for wine, women and song had already placed him firmly in the maternal bad books – but this trip was not only intended to improve his behaviour. Prince Albert Edward, Prince of Wales, was Queen Victoria’s oldest son and heir. Although Bertie (as he was known) would not accede to the throne until 1901, the Queen was determined to mould him into a model monarch – and she also hoped his visit would improve diplomatic relations with the Subcontinent, and so pave the way for her own political ambitions in Asia.

The tour was made largely by sea and rail (and sometimes on the backs of elephants). Among the Prince’s entourage of over 50 was William H Russell, the Prince’s Private Secretary and a reporter for The Times; Russell recorded minute details of the trip in The Prince of Wales’s Tour: A Diary in India, which was illustrated by another member of the party, the artist Sydney Hall. Together they covered over almost 10,000 miles, starting in Bombay and travelling to Baruna, Ceylon (Sri Lanka – then a British Crown colony), Trichinopoly, Madras and Calcutta, the seat of the British Raj, before moving on to the holy city of Benares, Lucknow, Delhi, Amritsar, Lahore and Agra. The Prince had, wrote Russell;

‘met more Chiefs than all the Viceroys and Governors together….(and) seen more of the country in the time than any living man.’

Queen Victoria was already popular in India, but Bertie’s charm and his willingness to meet everyone, from prince to commoner, endeared him to the whole of the Subcontinent. At the time the country was run by the British Indian government (as representative of the Crown) and some officials treated local rulers very badly. The Prince was appalled by this, and although he had little real power he was sympathetic to their problems, investigating their complaints and describing their situation in letters to his mother:

‘Because a man has a black face and a different religion from our own, there is no reason why he should be treated as a brute.’ As a result of the Prince’s intervention, new guidelines were issued to colonial officials, and at least one was sacked.

Before the tour it had been requested that there should be no gifts, but Lord Northbrook, Viceroy of India, knew no-one would take any notice; gift-giving to visiting royals was as popular then as it is now, and no maharajah worth his salt was going to let his neighbour out-gift him. Northbrook suggested rather that gifts should be limited to ‘curiosities, arms and specimens of local manufacture’. In fact the Prince was showered with everything from bangles to betel nut boxes, many embellished with elaborate decoration and precious stones, so that, in addition to displays of great riches and impressive craftsmanship, this exhibition gives us a fascinating insight into Indian court customs. The Prince’s trip to Benares included a cruise down the Ganges; although Bertie declined to take a dip in the sacred river, he still went down a storm with native rulers and colonials alike. The Maharaja of Benares presented him with an exquisite gold peacock inkstand in the shape of the State Barge in which he had travelled, its stern consisting of a Makara (mythical sea creature) and the prow a peacock inset with glittering sapphires and diamonds. The intricate details include a black and gold paddle and a tiny anchor on a golden chain. Everywhere he went the Prince was greeted with lavish receptions. On arrival a formal address would be read to him; these addresses were recorded on scrolls of silk and presented to him in ‘address boxes’, each of them beautifully decorated in the style of the local area. In Trichinopoly the Prince was hugely impressed by the illuminations and a firework display, and these are depicted on an opulent red scroll. The Chief Engineer of the Punjab Northern State Railway presented a casket containing the steel hammer used by the Prince to hammer in the last rivet of the Alexandra Bridge (named after Princess Alexandra, Bertie’s somewhat longsuffering wife.) In Ceylon he received an ivory and gold casket set with jewels containing local spices – betel nut, cinnamon, coffee, vanilla and pepper. Betel nuts were given to diners after court banquets, often mixed with seeds, coconut and tobacco and wrapped in a betel nut leaf; before the meal began guests were welcomed with rosewater, and many gorgeous containers are shown. In a ceremonial gold service presented by the Maharajah of Mysore there are pure gold salvers, perfume pots and rosewater sprinklers, each one beautifully decorated. More perfume holders come in the shape of seated lions with tiny articulated tongues, or as the buds of a flower, the leaves opening to reveal little trees of tiny gold bottles. The petals of a lotus flower perfume holder are red enamel; they open to reveal a red and yellow cup on a base decorated with pictures of animals, hunters, palaces, flowers and gods. Even the pedestal feet are set with diamonds in green lacquer. The design of two rosewater sprinklers from Cutch reflects the tale of Nandu and Gangu; two slim cranes with fish in their beaks, their feet carefully formed in gold. Animals are everywhere in this exhibition; brass camels and elephants parade, an articulated fish holds kohl to decorate the eyes, the handles of peacock feather fly whisks (fans) are teeth-baring tigers. The Prince enthusiastically joined in every blood sport going, bagging his first tiger in Jaipur and killing an elephant in Ceylon. His participation in all these hunts and shoots was controversial even at the time – elephant killing had only recently been banned by the colonial government – but on the whole public opinion stayed with him, the Aberdeen Journal saying that although such activities might be seen as brutal, the Indian people ‘were doing their best, from the highest to the lowest, to welcome him after their fashion.’ Lord Northbrook had asked for ‘curiosities’, and in some places, curiosities are what the Prince got. The ruler of Jaipur presented him with a silver astrolabe, and in Patna he received a fabulous equatorial sundial that shows not only 60 minute hours but also ghatis, a 21 minute measure based on Indian astrology. A pichangatti knife and scabbard from Coorg contain various grooming implements – a pair of tweezers, a scraper, a file and even an ear pick. Northbrook had also requested ‘arms’, and these the Prince received in abundance, from shields of rhino hide (one encrusted with 800 diamonds) to swords, knives, and armguards. The steel blade and sharp lines of an ominously-named punch dagger or katar from the Maharajah of Viziangaram have an art nouveau air about them, whilst another of these terrifying instruments springs open to reveal a second blade within the first.

Strangely, some of the items presented to the Prince were not ‘specimens of local manufacture’ at all. A casket given to him in Agra had been made by Edinburgh goldsmiths Marshall & Sons; its decoration shows Hindu deities and zodiac symbols alongside English roses, Scottish thistles and Irish shamrocks, whilst the lid bears a golden crown on a golden cushion. An ornate pocket watch with a jewelled chain, presented by the Maharajah of Patiala, came from Switzerland, while a mother of pearl card tray is Cantonese in origin. The blades of Khairpur swords were brought from Iran before being fitted with new hilts and ornamented with gems, probably by European craftsmen working in India.

Indian craftsmen also adapted their wares to suit the growing colonial and export market. A cup and saucer originally designed to store solid perfume has had a handle added to increase its appeal to Europeans. In 1876 the Prince returned to London. His tour had been a huge triumph, and he was keen that the public should see his souvenirs. Interest in Indian design had been growing since the 1851 Great Exhibition in London, but Bertie also wanted people outside the capital to be able to enjoy his gifts. The Prince of Wales’s Indian Collection travelled across Britain, France (Paris, right) and Denmark from 1876 to 1883; from 1879 to 1881 it came north of the border, being shown in Glasgow, Edinburgh and Aberdeen (where the funds generated contributed to the building of the Aberdeen Art Gallery.)

The success of the tour encouraged the Queen to take the step that she had been planning. On 1st May 1876, she took the title of Empress of India. The jewel in the Crown was hers.

Splendours of the Subcontinent: A Prince’s Tour of India 1875-86 is at The Queen’s Gallery, Palace of Holyroodhouse, until 22 April 2018.  For opening hours and details of Christmas closures see https://www.royalcollection.org.uk/visit/the-queens-gallery-palace-of-holyroodhouse. A hardback catalogue accompanies the exhibition and may be purchased from the Gallery shop or online.

With grateful thanks to Stephanie Cliffe, Royal Collection Trust.