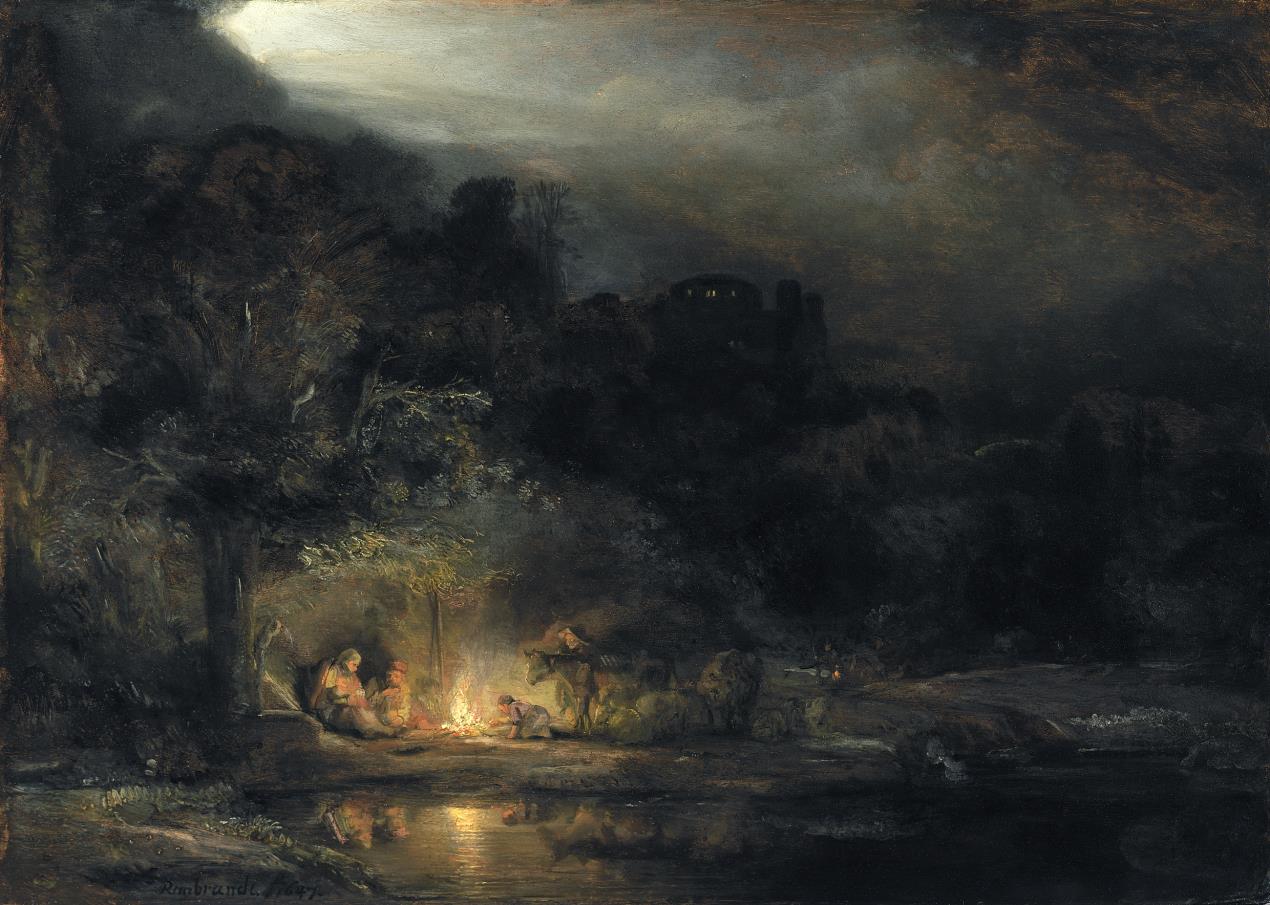 As usual the National Galleries of Scotland will have an exciting and wide-ranging programme of exhibitions in 2018. Today they have announced some of the highlights including the German Expressionist Emil Nolde and the extraordinary ambition of Jenny Saville’s monumental paintings.

Other highlights will celebrate Henri de Toulouse-Lautrec’s mastery of the lithographic poster and the powerful, beautiful portraits of Scottish artist Victoria Crowe.

Rembrandt: Britain’s Discovery of the Master will be the major summer Festival exhibition at the Scottish National Gallery next year. This exclusive new show, which will only be seen in Edinburgh, will reveal how the taste for Rembrandt’s work in Britain evolved over the past 400 years. From around 1630 it grew into a mania that gripped collectors and art lovers across the country, reaching a fever pitch in the late-eighteenth century. The exhibition will also reveal the profound impact of Rembrandt’s art on the British imagination, by exploring the wide range of native artists whose work has been inspired by the Dutch master right up to the present day.

The exhibition will bring together key works by Rembrandt which remain in British collections, including Belshazzar’s Feast (c.1635) from the National Gallery London, and Girl at a Window (1645) from Dulwich Picture Gallery, as well as star paintings now overseas, such as The Mill (1645/8) from the National Gallery in Washington, which left Britain when it was sold to a US collector for the staggering sum of £100,000 in 1911.

Rembrandt is renowned for the penetrating realism of his self-portraits and there will be some particularly fine examples in this show, including the extraordinary Self-Portrait, aged 51 (on long-term loan to the SNG) and Portrait of the Artist as Young Man (c.1629-31) from the Walker Art Gallery in Liverpool, which was the first painting by the artist to leave Holland and the first to enter a British collection, when it was presented to Charles I in the early 1630s.

It was Rembrandt’s portraits and landscapes that most attracted British collectors, and which had a particularly powerful impact on British artists. The exhibition will include his only portraits of ‘British’ sitters, Rev Johannes Elison and his wife Maria Bockenolle (both 1634), on loan from the Museum of Fine Arts, Boston, and key landscapes including The Rest on the Flight into Egypt (1647) from the collection of the National Gallery of Ireland in Dublin.

Although they were painted in Amsterdam, the Boston portraits depict a Dutch couple who lived in Norwich, and the paintings were in Britain by 1677. They are one of only three pairs of full-length portraits painted by Rembrandt, and have not been seen in the UK since 1929.

The artist’s genius was equally apparent in his mastery of printmaking and drawing as in his painting; alongside 16 key works in oil (and further oils by his workshop) will be an extensive selection of 13 fine drawings and more than 20 prints, including some of his most celebrated etchings, such as Christ Presented to the People (1655), The Three Trees(1643) and Portrait of Jan Six (1647).

Among the British artists represented in the exhibition will be William Hogarth (1697-1764) and Sir Joshua Reynolds (1723-92), both of whom betray a heavy debt to Rembrandt, seen here in works such as Reynolds’s Self-Portrait when Young (1753-8). Reynolds also wrote extensively about Rembrandt’s work and was an avid collector of it himself (A Man in Armour (1655), which he owned, will be on loan from Kelvingrove Art Gallery and Museum). Reynolds helped to burn Rembrandt’s fame into the British psyche, and it has endured through to the to the twenty-first century. The exhibition will include a powerful version of A Woman bathing in a Stream (1654) by the renowned British painter Leon Kossoff (b.1926), as well as the work of artists such as John Bellany (1942-2013), Eduardo Paolozzi (1924-2005), and Frank Auerbach (b.1931).

Rembrandt: Britain’s Discovery of the Master, which opens on 7 July and runs until 14 October, has been conceived by Dr Tico Seifert, the NGS Senior Curator of Northern European Art, and will have its only showing in Edinburgh. The exhibition is supported by the Friends of the National Galleries of Scotland and Players of the People’s Postcode Lottery.

The large-scale summer exhibition at the Scottish National Gallery of Modern Art (SNGMA) in 2018 will be a major survey of the career of the celebrated German Expressionist artist, Emil Nolde (1867-1956). Nolde was one of the greatest colourists of the twentieth century, an artist passionate about his north German home near the Danish border – with its immense skies, flat, windswept landscapes and storm-tossed seas – but equally fascinated by the demi-monde of Berlin’s cafés and cabarets, the busy to and fro of tugboats in the port of Hamburg and the myriad peoples and places he saw on his trip to the South Seas in 1914. Nolde felt strongly about what he painted, identifying with his subjects in every brushstroke he made, heightening his colours and simplifying his shapes, so that viewers could also experience his emotional response to the world about him.

Emil Nolde: Colour is Life, will comprise about 120 paintings, drawings, watercolours and prints, drawn from the incomparable collection of the Emil Nolde Foundation in Seebüll (the artist’s former home in north Germany), and will cover Nolde’s complete career, from his early atmospheric paintings of his homeland right through to the intensely coloured, so-called ‘unpainted pictures’ – works done on small pieces of paper during the Third Reich, when Nolde was branded a ‘degenerate’ artist and forbidden to work as a professional artist. The works on show will also include Nolde’s justly famous flower and garden paintings, and his extraordinary religious paintings, with their strange mixture of spirituality and eroticism.

The exhibition is a collaboration between the Emil Nolde Foundation, Seebüll, the National Gallery of Ireland, Dublin, where it will be shown first, and the Scottish National Gallery of Modern Art, where it will be shown at Modern Two from 14 July to 21 October 2018. This will only be the second exhibition of Nolde’s work in Scotland (the first was a small show of his watercolours at the NGS in 1968). It will be the largest exhibition in the UK since 1996.

The third instalment of NOW, a three-year series of contemporary art exhibitions currently running at the SNGMA, will open on 24 March 2018, and feature a major career-spanning presentation of works by renowned British artist Jenny Saville (b.1970). Saville graduated from Glasgow School of Art in 1992 and has enjoyed worldwide success over the past 25 years. She is best known for her paintings which often depict the naked female form in close-up and on a massive scale. This will be the first museum exhibition of her work ever to be staged in Scotland. It will feature monumental paintings and drawings dating between 1992 and 2017, which demonstrate the scale and ambition of the artist’s practice, and her singular and dynamic approach to composition, gesture, materials and subject matter.

This edition of NOW will also feature the work of five further artists who have addressed themes of the body, performance, process and materiality. These will include the installation of a major new work by Scottish artist Christine Borland (b.1965), recently commissioned by the Institute of Transplantation, Newcastle; a room of painted metal sculptural works by Glasgow-based artist Sara Barker; a photographic series by the South African artist Robin Rhode; a two-channel video by Austrian artist Markus Schinwald; and new works by Edinburgh-based artist Catherine Street.

Victoria Crowe: Beyond Likeness, which opens at the Scottish National Portrait Gallery next spring and runs until November 2018, will bring together a group of outstanding portraits by the distinguished Scottish artist Victoria Crowe (b.1945). Crowe’s approach to portraiture seeks to do more than record the outward appearance of a person, but to represent also something of her sitters’ inner life – the experiences and preoccupations of the individuals depicted, their world of ideas and dreams. This exhibition will not only demonstrate the exceptional skill of a remarkable painter and colourist, but also tell Crowe’s story – both professional and personal – through her art. The portraits selected represent a journey for the artist, and include depictions of outstanding figures from the worlds of the arts and sciences; these include her friend and neighbour the composer Ronald Stevenson; the pioneer medical scientist Dame Janet Vaughan; the poet Kathleen Raine; the actor Graham Crowden; the psychiatrist R D Laing; and Professor Sir Peter Higgs.

Pin-ups: Toulouse Lautrec and the Art of Celebrity will be the first exhibition held at the NGS devoted to the art of Henri de Toulouse-Lautrec (1864-1901), the celebrated French Post-Impressionist artist whose work is synonymous with the bohemian nightlife of Paris in the late-19th Century. The ‘city of pleasure’ was famed for its cabarets, dance halls and cafés; most famous of all were the nightspots of the district of Montmartre, where Toulouse-Lautrec lived, worked and socialised, including the now legendary café-cabarets Le Moulin Rouge and Le Chat Noir. Pin-ups: Toulouse Lautrec and the Art of Celebrity will focus on the artist’s lithographic posters, portfolio prints and illustrations which made stars of Montmartre’s venues and their entertainers – personalities such as Yvette Guilbert, Jane Avril and Aristide Bruant. Toulouse-Lautrec’s career coincided with a revolutionary moment in the history of western printmaking – the development of the poster as a means of mass-marketing – and lithography and poster-making were central to his creative process from his first experiments in the medium in 1891 until his death in 1901.

Around 75 works by Toulouse-Lautrec and his contemporaries will be on show, including prints by Pierre Bonnard, Théophile Alexandre Steinlen and Jules Chéret. British artists were equally attracted to the dynamic café culture of Montmartre and the exhibition will also showcase works by artists such as Walter Sickert, Arthur Melville, J D Fergusson and William Nicholson, among others. There will be key loans from the Victoria & Albert Museum, the Ashmolean Museum and Aberdeen Art Gallery.

Speaking at the launch today, Sir John Leighton, Director-General of the National Galleries of Scotland, said: “We are extremely proud of what has been achieved at the National Galleries in recent years with a programme that has true international weight and showcases the very best of art from Scotland. We intend to build on this in 2018 with another world-class offer that reflects the range of our collection from stunning Old Master paintings to cutting edge contemporary art. We are especially pleased to be the only venue in Britain for a major Rembrandt show which will be one of the most ambitious and important exhibitions to be held anywhere in the UK next year.”