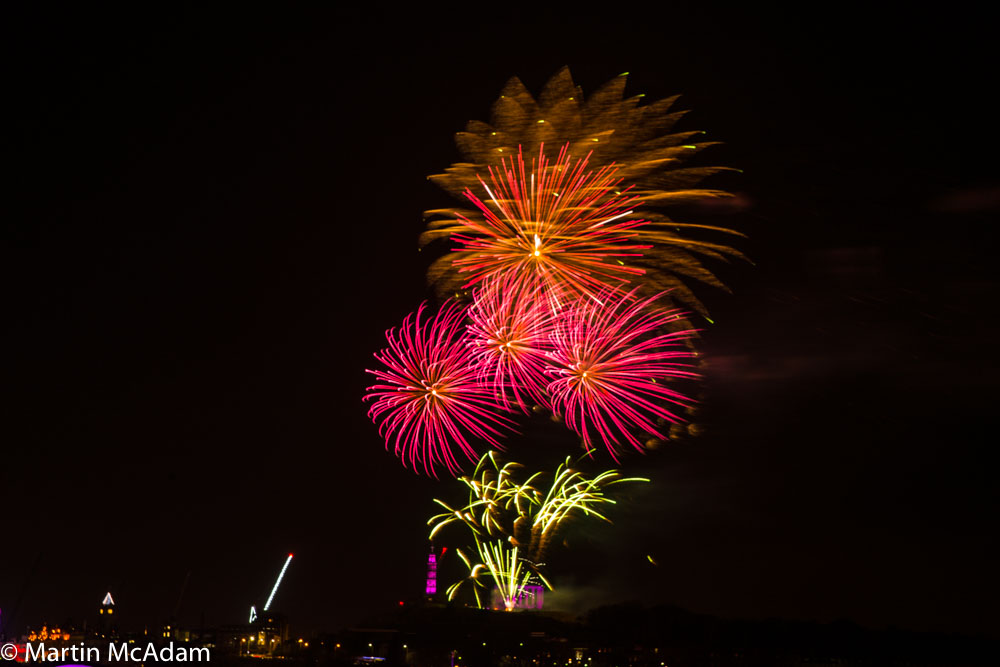 The temperature dropped markedly between the time of the opening photo call at Holyrood and the fireworks from Calton Hill which marked the end of the Torchlight Procession.

As part of the evening’s proceedings the #Scotword was unveiled as Braw in answer to the question ‘What makes you proud to live in Scotland?’ Around 20,000 people took part in the procession from North Bridge to Holyrood Park, although some of those at the end may not have seen the unveiling of Scotword as they were still walking into the park. Another 20,000 people are thought to have been spectators along the Royal Mile.

In Holyrood Park Mark Martin acted as MC and the acts included PyroCeltica who were just tremendous, juggling with fire in a very nonchalant manner.

There was great entertainment fromPipe Idol Robbie MacIsaac who beat off three other finalists in the fierce final at Piping Live in 2017, members of Hawick Scout Pipe Band and Preston Lodge High School Pipe Band in Prestonpans, over 20 young pipers and drummers from Peoples Ford Boghall & Bathgate Caledonia Juvenile Pipe Band who joined the procession alongside the rousing sound of talented young brass players from Whitburn Youth Band.

From Edinburgh Pulse of the Place keep everyone warm @edhogmanay on the Holyrood Stage Fireworks at 9 from Calton Hill pic.twitter.com/C82q8fxFNH

Leith samba band Pulse of the Place kept the rhythm with their vibrant young samba sound.

The procession was led off by the young Jarls of the legendary Up Helly Aa Vikings from Shetland took centre stage when the 2017 Jarl Squad championed their young members in their annual appearance at Torchlight Procession. Josef Lawrence and the Hypocrites played to the massed crowds and they were certainly energetic enough to get the crowd dancing ahead of the fireworks from Calton Hill which lasted just under five minutes to whet our appetites for tomorrow evening.

The #ScotWord campaign was co-designed and led by young people, connecting with their peers between the ages of 8 and 26, encouraging them to choose one word they want to say about Scotland to the rest of the world. The resounding response was #BRAW from a shortlist which also included#CULTURE #WELCOME #HAME #ALIVE #DIVERSE and #BONNIE. 2,000 torch bearers spelt out #BRAW in Holyrood Park at the end of the Torchlight Procession, stretching 104m long and 24m high and visible from space. Images of this launch of Edinburgh’s Hogmanay have been shared around the world putting the young people of Scotland centre stage and heralding the start of the Year of Young People 2018, a year in which Scotland will celebrate its young people and enable them to shine – in this case quite literally – on the Edinburgh stage, the Scottish stage and the international stage. Charlie Wood and Ed Bartlam, Directors of Edinburgh’s Hogmanay said:“When we set about designing Edinburgh’s Hogmanay 2018, we wanted to engage the people of Scotland and at the start of Scotland’s Year of Young People, most especially young Scotland. This is a country that empowers young people and has a proud history of discourse that we’re so pleased to see is flourishing. #ScotWord is the blazing voice of Scotland’s young people telling the world why they’re proud to live in this extraordinary country and what better word to sum that up than BRAW? The iconic procession was a huge success made all the more wonderful by the young performers who entertained us all. There is a lot more to come over the next two days and we look forward to sharing our spectacular Street Party with you tomorrow, as well as welcoming families to the first ever Bairns Afore.”

Edinburgh’s Lord Provost, Frank Ross, said: “It is a special moment to lead such a breath-taking torchlight procession through Scotland’s capital and to see people come together from all over the world to celebrate the start of Edinburgh’s Hogmanay. You see the city at its best and you can’t help but feel proud of its streets and its people. This year, the event has raised much needed funds for the OneCity Trust and involved young people from all over Scotland to welcome the Year of Young People 2018. I want to thank every single young Scot involved. Well done.”

Katie Tweedie, #ScotWord Young Champion said: “It has been absolutely incredible to be part of the #ScotWord campaign for Edinburgh’s Hogmanay. As a #ScotWord Champion for Midlothian I have engaged with youth groups and charities allowing as many young people as possible to get together and think big about what makes them proud to live in Scotland.”

Culture Secretary Fiona Hyslop said: “Hundreds of young people have shared what makes them proud of Scotland’s rich and diverse culture. Year of Young People 2018 is an opportunity to further strengthen their voice and celebrate the amazing ideas, talents and achievements which make up our nation’s young people.

“Next year, will provide a platform for young people to take centre stage, with an exciting programme of cultural, music and sporting events taking place across the country for all ages to enjoy. Importantly, it will celebrate their contributions amongst local communities and give them a stronger voice on issues which most affect their lives.”