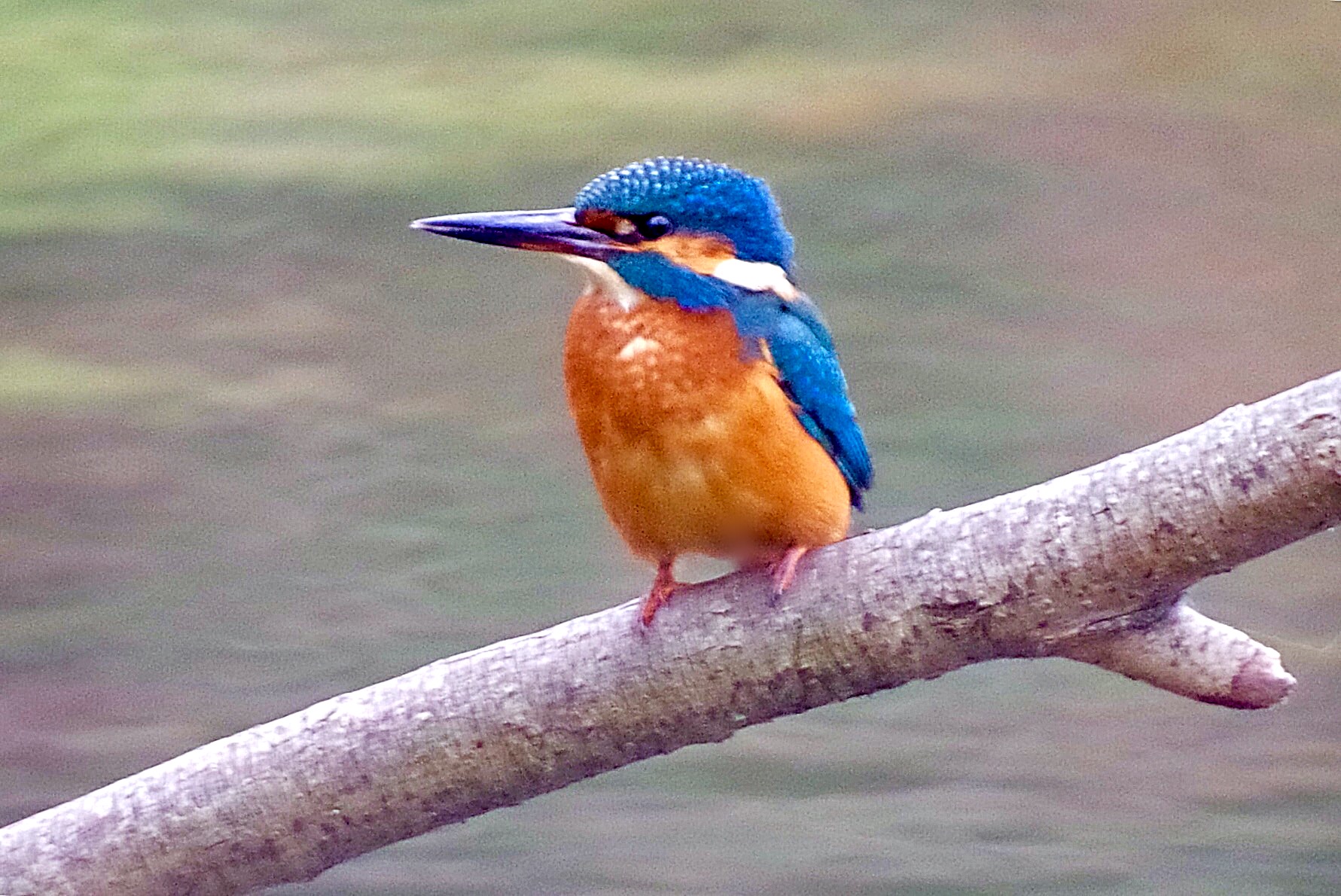 The excitement of the week for me was to see a kingfisher, this particular kingfisher.  He or she (there’s little difference) lives close to a hide in the nature reserve where I volunteer on a Tuesday.  I’ve only ever seen a kingfisher a handful of times in my life, so to get a proper look at this reclusive bird was quite a thrill.  My colleague spent two cold hours waiting in the hide to get this photograph, our very own “king of the fishers” (the origin of its common name.)

You certainly know when you’ve seen a kingfisher.  That flash of electric-blue as it dives for a minnow in the water is unmistakable.  Surprisingly, it is not caused by iridescence or a bright pigment but by the way the feathers are arranged to split the light.  You might think too that such an exotic bird is an endangered species. Not so. It’s common throughout the world in one or other of its 114 sub-species. Even in Europe, it is only on the “amber alert” list not the “red” list and in the UK there are estimated to be around 4,000 breeding pairs.

But my encounter with the kingfisher was about the only bright spot of the week.  I spent a day hill-walking in the Cairngorms shrouded in mist and we’ve been subjected to an uneasy swirl of windy wet days and cold dry days. I wasn’t even lucky enough to see the Northern Lights which people in Caithness have been boasting about.

Instead, here in Edinburgh we’ve been watching MSPs in parliament try to shake off the whiff of slease which has drifted up from Westminster.  One Labour MSP has complained she was groped by a male colleague and the children’s minister Mark McDonald has resigned after admitting making inappropriate remarks.

MSPs have agreed to up-date their code of conduct on sexual harassment. An anonymous telephone hotline has been established to make it easier for women to report unacceptable behaviour.  And there are calls for the all-male management committee, with the unfortunate name of “The Corporate Body” to be gender balanced in future.

The parliament took two other steps into the 21st century this week. The First Minister Nicola Sturgeon apologised and announced a pardon for men convicted under the old anti-homosexuality laws. And a new law was announced to set targets for the reduction of child poverty. Currently, a quarter of Scottish children are living in households with an income of less than 60 per cent of average earnings.

The BBC’s so-called Paradise Papers, leaked from Bermuda, have also made depressing reading here in Scotland.  The majority shareholder in Celtic Football Club, Dermot Desmond, is alleged to have based his former airline company in the Isle of Man for tax purposes.  And the owners of the St Enoch’s shopping centre in Glasgow, the international finance company Blackstone, is said to have used accounts in Jersey and Luxembourg, again for tax purposes.  And three stars of the BBC’s own comedy show “Mrs Brown’s Boys” are said to have been paid through an account in Mauritius.

No one is alleging that any of this is illegal. Indeed, all of the above stress that they have gone out of their way to comply with the tax laws.  But it is strange that anyone in Britain should be using obscure islands, which happen to have low taxes and secretive law firms, in which to base their operations. And it strange, as Nicola Sturgeon remarked at first minister’s question time, that the UK government has done little to clamp down on such off-shore business transactions.

Poor Donald Trump. He continues to get a bad press in Scotland over his golf course on the Menie estate on the Aberdeenshire coast.  The former First Minister Alex Salmond has rounded on his old golfing pal and accused him of breaking his promise to spend £1bn on the resort and create 6,000 jobs.  Instead of two golf courses, a 450 bed hotel and 1500 homes, ten years later we only have one course, a club house and a 16 bed hotel.

The Trump organisation says the project has only just begun.  But we also learnt this week that it’s likely to run into what Mr Trump calls a “hoax”  –  climate change.  The Scottish government’s “Coastal Change Assessment” has warned that rising sea levels threaten a number of links golf courses, including the Menie estate.  On the other hand, Mr Trump may be pleased to hear from Scottish Natural Heritage that so much damage has been done to the sand dunes on which part of his golf course sits, that they may well lose their designation as a site of special scientific interest.

Finally, I always find this Remembrance weekend deeply depressing. This year the services, parades and ceremonies taking place up and down the country will be remembering the second battle of Passchendaele which ended 100 years ago this weekend. With little progress made, the casualties reached 43,000 men on the Allied side and 30,000 on the German side. Seventy five years ago, German troops rolled into Vichy France. But Montgomery’s army, having just won the Battle of El Alamein, rolled into Tobruk and Churchill felt able to declare: “This is not the end, it is not even the beginning of the end. But it is perhaps the end of the beginning.”

It’s hard for us now to come to terms with such dreadful events of the past. We are left stumbling on.  Meanwhile, the kingfishers sit on their branches and dive for minnows, as they have done for 40 million years. Their electric-blue wings and red chests will continue to dazzle long after we are gone.