Face it Edinburgh – your childhood days are behind you! Oh No they’re Not! Let all the King’s’ metamorphosed mice Pantomime-horses carry you to the Ball and leave all those winter-time blues behind you. The King’s Theatre Edinburgh panto is this year sponsored by Rowan Glen, one of Scotland’s much-loved dairy brands. Arts & Business Scotland will provide match-funding of Rowan Glen’s sponsorship through their Culture & Business Fund Scotland (CBFS), which aims to encourage active collaboration between businesses and the cultural sector.

For veteran panto star Allan Stewart, performing in his 17th consecutive panto at the King’s this year, Cinderella has a personal significance: ‘Cinderella holds a special place in my heart as it’s the first pantomime I ever did. I played Buttons in Cinderella at the Pavilion in Glasgow back in 1975, and before appearing in that show, I’d never even seen a panto never mind starred in one. That was the beginning for me though and I’ve never looked back.’

Panto baddie Grant Stott meanwhile is returning in his 20th consecutive panto at the King’s Theatre Edinburgh. ‘I must be doing something right’ said the actor and broadcaster who made the move from Forth 1 earlier this year.

Comedian/Actor/Dancer Andy Gray is looking forward to performing in panto for the first time with his daughter Clare Gray. ‘I’m absolutely delighted to have Clare in the panto. She used to come to visit me during panto when she was wee and watch her daft Dad!’ 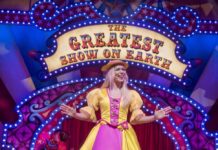