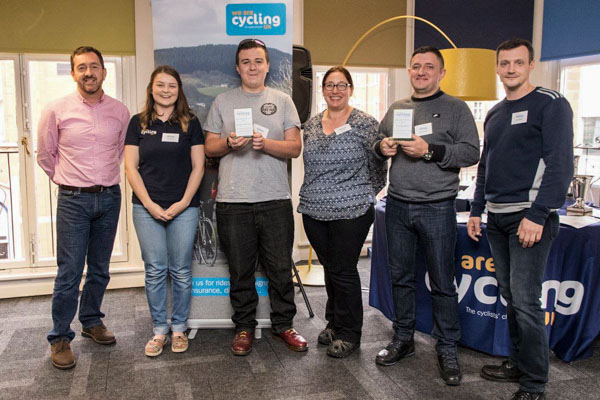 National cycling charity Cycling UK celebrates the efforts of 1st Step Bikes, based in Linlithgow, winner of a Cycling UK’s Volunteer of the Year Award in the Best Community Project category.

1st Step is run by volunteers who have mainly been affected by addiction and are often at risk of offending or being victims of crime. The group support recovery through developing new skills and established 1st Step Bikes, which is an affiliate group of Cycling UK, to use cycling to build wider interests and friendships. Having built a strong team of volunteers, it works with people from across West Lothian and Falkirk. 1st Step also runs a Community Café based at the Longcroft Church Hall (St Ninian’s Craigmailen Parish).

Maria Throp, the group’s Development Manager, explained that winning the award was a real team effort. “We are very excited after only a year of operation to have won such a prestigious national award. It really is a fun and friendly place to be, and all the dedicated volunteers work hard to fix up old unwanted bikes and give them a new lease of life. They are then sold for affordable prices, or donated to good causes in the community. But it’s just as much about supporting people in their recovery journey as cycling.” 1st Step’s supporters include Police Scotland, who provide a base for the organisation, in their local garages in Linlithgow.

Community Policing Inspector Scott Robertson said, “This is fantastically exciting news for the First Step volunteers. The recent work put in by the team to gain the support of the local community and the subsequent on-going benefits for the wider community are huge, and Police Scotland are pleased to have been working in partnership with 1st Step. Maria is truly inspirational in her approach and it has been a pleasure working with her. She even convinced me to donate my own bike to the project!”

Chris Boardman, who presented the awards to the winners, said: “(It is) great to see a room full of so many people directly on the ground enabling people to enjoy bikes. Inspirational.”

Cycling UK’s Chief Executive Paul Tuohy said: “1st Step Bikes is a truly inspiring success story. Their work perfectly encapsulates the positive impact cycling has on the physical and mental well-being of an individual as well as wider society. Throughout Scotland, Cycling UK member groups, affiliate groups and community projects like 1st Step Bikes are helping to change lives for the better.”