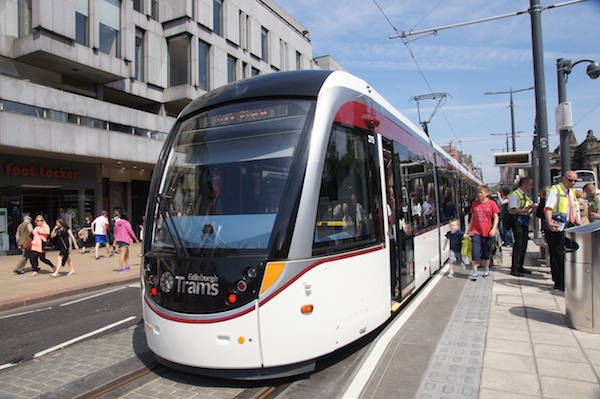 The council will debate the details and decide on extending the tram to Newhaven on Monday. You can watch the Transport and Environment Committee live here from 2pm.

During the last 18 months or so the council officers have been writing a business case which has just been published on the council website . All 63 councillors were given the opportunity of reading this in a Data Room over the past two weeks. They also had the chance to quiz council officers about the terms of it.

This document will now be debated at the Transport and Environment Committee on Monday 4 September but will also require the ratification of the full council on 21 September 2017.

The SNP and Labour groups have confirmed that all of their councillors visited the data room to find out about the project to complete what was originally known as Route 1a. We spoke to the Council Leader SNP councillor Adam McVey about the possibilities the tram could open up for our growing city. First we asked how he could possibly hope to persuade Leith Walk businesses that an extension to the tramline would be a good thing considering that three lanes on the street will be closed to traffic for 18 months.

“I think what we can do is try and develop and explain the rationale for it, the need for the tram extension. And also we can work with businesses to make sure we get their issues on the table and we can work through them.

“That is about developing the communications strategy to make sure businesses know what’s happening and when it’s happening so they can plan properly.

“Also we can develop the compensation scheme properly to make sure businesses can sustain and survive themselves.”

With the Tram Enquiry starting next week making investigations into how the first part of the tram project was run by the council, we asked the Council Leader how that might affect the decision to extend the tramline or not.

The Outline Business Case allows for any recommendations from the Tram Enquiry to be incorporated into the project, but what would happen if the Enquiry is delayed?

McVey answered : “Well we hope it wouldn’t be. We hope that the timeline we’ve set out which is generous. I think it gives a generous amount of time for the Tram Enquiry to report, to report any findings that might be pertinent to an extension programme. I think we’ve given enough time for that to be a reasonable way forward.

“If for whatever reason it does not manage to report within that timescale the council would have two principal concerns. One is we have a vast number of people still moving to the city that we need to try and find a way of getting them around and high capacity public transport – tram – is the way that we are trying to address that problem.

“We would worry about getting to a point of further exacerbating the situation – more congestion in the city  – without fundamentally dealing with it. That’s one concern.

“The other concern is not just about the cost of the Tram Enquiry itself if it continues to dwindle on, but it is also about the cost of this project. Inflation is an identified risk in this. If we postpone by six months, by a year, by two years, by any length of time because of an undefined completion date of an enquiry that would push millions of pounds more of spending through inflation onto the programme which I don’t think the people of Edinburgh will look too kindly on.

“We have done an enormous amount of institutional ‘lessons learned’ but if any external body, including the Tram Enquiry, has further things that they want to put into that mix to make sure we are getting this right, they are more than welcome. But they need to do it in an expeditious way and I think the year that we have outlined from now until we push a big green button on tram extension : I think that year is ample.”

One of the biggest criticisms of the tram project was that it cost several times as much as was budgeted for and only half the line was delivered. This time the tram extension is estimated to cost £165.2million. We asked the Council Leader how he would hope to keep a grip on expenses.

“What we are doing is learning the lessons from the first tram in terms of things that went wrong. even the way this contract is set up will be fundamentally different. It will be design and build rather than looking at a specific way of setting out the contract or a specific way of designing and building.

“We have learned lessons all the way down the line and that will make sure that we not only get the contract right but we get the programme right.”

So how will the decision to either proceed with the tram extension or not unfold?

The decision to proceed in the first place to the next phase will be taken next month. Then the procurement process begins and the council will decide to engage a contractor and proceed with the tram project in November 2018.

Councillor McVey concluded : “The timeline from November 2018 is a period of months when we will be working with the selected contractor (if indeed we go ahead with the scheme) to make sure that we line everything up, do all the necessary planning to make sure that the build programme works as smoothly as possible.

“Then construction commences and for about 18 months there will be quite considerable disruption on Leith Walk for example. We aim to complete construction by the end of 2021. Paying passengers will be on board by the next council elections which is a crucial date for our aspirations. I think that gives the people of Edinburgh, if we deliver against that timescale, a lot more confidence in this scheme than they had in the previous one.”