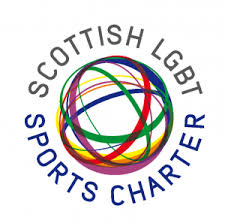 Professional football clubs in all four of the SPFL divisions, including Hibs and Hearts, have teamed up to better include lesbian, gay, bisexual and transgender (LGBT) people by signing up to the Scottish LGBT Sports Charter.

It’s the first time in Scotland that so many clubs have made a commitment to better include LGBT people in the beautiful game and it includes the biggest clubs in Scottish Football.

The Charter includes a set of five principles which aim to remove the barriers to sport for LGBT people. Over thirty governing bodies of sport have already signed up, including the Scottish Football Association.

Scott Cuthbertson, Development Manager of the Equality Network said, “We’re delighted that these clubs, from across all four SPFL divisions, are today making a commitment to LGBT supporters, officials and the next generation of LGBT players.

Today’s message is loud and clear, everyone is welcome at football and we are working for a more inclusive game.

We don’t yet have any openly LGBT professional players in the men’s professional game in Scotland but we know there are plenty of LGBT fans. Thank you to those clubs who have already taken this step. For clubs who haven’t yet signed up and who want to make their club more inclusive, our door is always open.”

The charter states as its aim that “Scotland will be a country where everyone can take part, enjoy, and succeed in sport at all levels whatever their sexual orientation and gender identity”, it was developed in consultation with sports governing bodies (SGBs), other sports stakeholders and LGBT people.

Hibernian Chief Executive Leeann Dempster said, “Sport has the power to break down barriers, and Hibernian has equality and inclusion at the roots of our heritage. We are happy to sign the LGBT Sports Charter and promote a more inclusive game.”

Celtic’s Scott Brown said, “This is an issue which needs to be addressed and tackled and therefore we are delighted to sign up to the Charter, and promote the very important message that sport is for all.”

Rangers striker Kenny Miller commented, “Rangers is an inclusive club and strives to promote equality and inclusion and we are delighted to sign up to the Scottish LGBT Sports Charter.

“Everyone should be able to take part, enjoy and succeed in sport whatever their sexual orientation or gender identity and we are proud to support this initiative.”

Ann Park of Heart of Midlothian FC said, “We’re pleased to sign up to the charter and are fully supportive of its aims in promoting equal participation and access to sport.”

Russell Anderson of Aberdeen FC said, “Aberdeen FC is proud to have been the first Scottish club to have signalled our intent to sign up to the LGBT Sports Charter and we are delighted that so many other clubs have joined us in doing so.”

Ian Maxwell, Managing Director at Partick Thistle Football Club said, “Football can be a very powerful tool to help fight all types of discrimination. Football is a universal language so no matter what your race, religion, background, gender or sexuality, kicking a ball about or watching your team on a Saturday helps put everyone on a level playing field. That is why, as a club, we are very proud to sign up to the Scottish LGBT Sports Charter.

“There is no place for discrimination of any kind in football – or sport more generally for that matter – so being able to play our own small part in helping to eradicate it was a no brainer for us as a club. We look forward to working closely with the Equality Network in the coming weeks and months in order to play our part.”

David Douglas, Chief Executive of Albion Rovers FC said, “Albion Rovers FC are fully committed to implementing this charter and believe that our football club should be inclusive, diverse and welcoming to any individual or group. Football teams and football players have a vital role to play in sending out strong signals that everyone has the right to be included and treated with respect and dignity. This is an important area for us and all football teams who want to be seen as modern, progressive and determined to be more than just a football club.”

Martin Johnston, General Manager of Peterhead FC said, “Peterhead FC are delighted to sign up to the LGBT Sport Charter and this reinforces our on-going commitment to ensure people throughout the footballing community, regardless of their sexual orientation or gender identity are able to support, work and play for the club in a warm, friendly and welcoming environment.

“We are proud to say that we have had no reports of homophobic abuse and bullying at our club in recent times, and whilst it appears to be virtually non-existent at Balmoor Stadium, we will continue to work within our club to ensure this remains to be the case.”

Hugh Torrance of LEAPSports Scotland said, “We welcome the news that thirteen Scottish football clubs have now signed up the Scottish LGBT Sports Charter, which is an important step in the work that needs to happen to transform the men’s game.

Our work with LGBTI sports fans and communities in Scotland underlines how important strong messages of commitment to equality and inclusion can be when coming from professional teams.”

The Equality Network say this is the first step in coordinated efforts that they hope will encourage more LGBT people to get involved in football. A study by the Equality Network launched in 2012 showed that 57% of LGBT people would be more likely to participate in sport if it was more LGBT friendly, and that football was the sport identified as having the biggest challenges to overcome in relation to LGBT inclusivity.