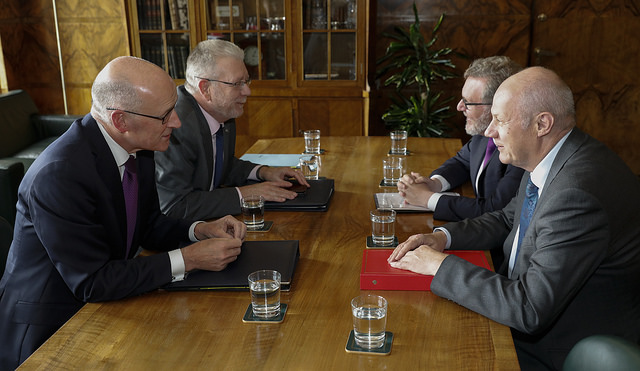 The purpose of the visit was to discuss the Brexit Bill and the possibility of powers coming back to Holyrood after Brexit with Deputy First Minister John Swinney and Minister for UK Negotiations on Scotland’s Place in Europe Michael Russell.

It appears that The Scottish Government has been left less than content with the outcome of the meeting.

Mr Russell said afterwards : “Today was a useful opportunity for an exchange of views between ourselves and the UK Government on Brexit and the repatriation of powers it will involve.

“But following today’s meeting we remain absolutely clear that, as things stand, we will not recommend to the Scottish Parliament that it gives its consent to the EU Withdrawal Bill.

“The bill as currently drafted is impractical and unworkable. It is a blatant power grab which would take existing competence over a wide range of devolved policy areas, including aspects of things like agriculture and fishing, away from Holyrood, giving them instead to Westminster and Whitehall.

“That means that unless there are serious and significant changes to the proposed legislation, the strong likelihood is that the Scottish Parliament will vote against the repeal bill.

“To be clear, that would not block Brexit and we have never claimed to have a veto over EU withdrawal.

“But UK Ministers should still be in no doubt – to override a vote of the Scottish Parliament and impose the EU Withdrawal Bill on Scotland would be an extraordinary and unprecedented step to take.

“What is now needed is a recognition from the UK Government that the bill as drafted cannot proceed. It should be changed to take account of the very serious concerns expressed by the Scottish and Welsh Governments.

“The current proposals are a direct threat to the devolution settlement which the people of Scotland overwhelmingly voted for in 1997.

“As we have made clear, we are not opposed in principle to UK-wide frameworks in certain areas – but this must be on the basis of agreement among equals, not imposed by Westminster.”

Photograph courtesy of The Scottish Government.