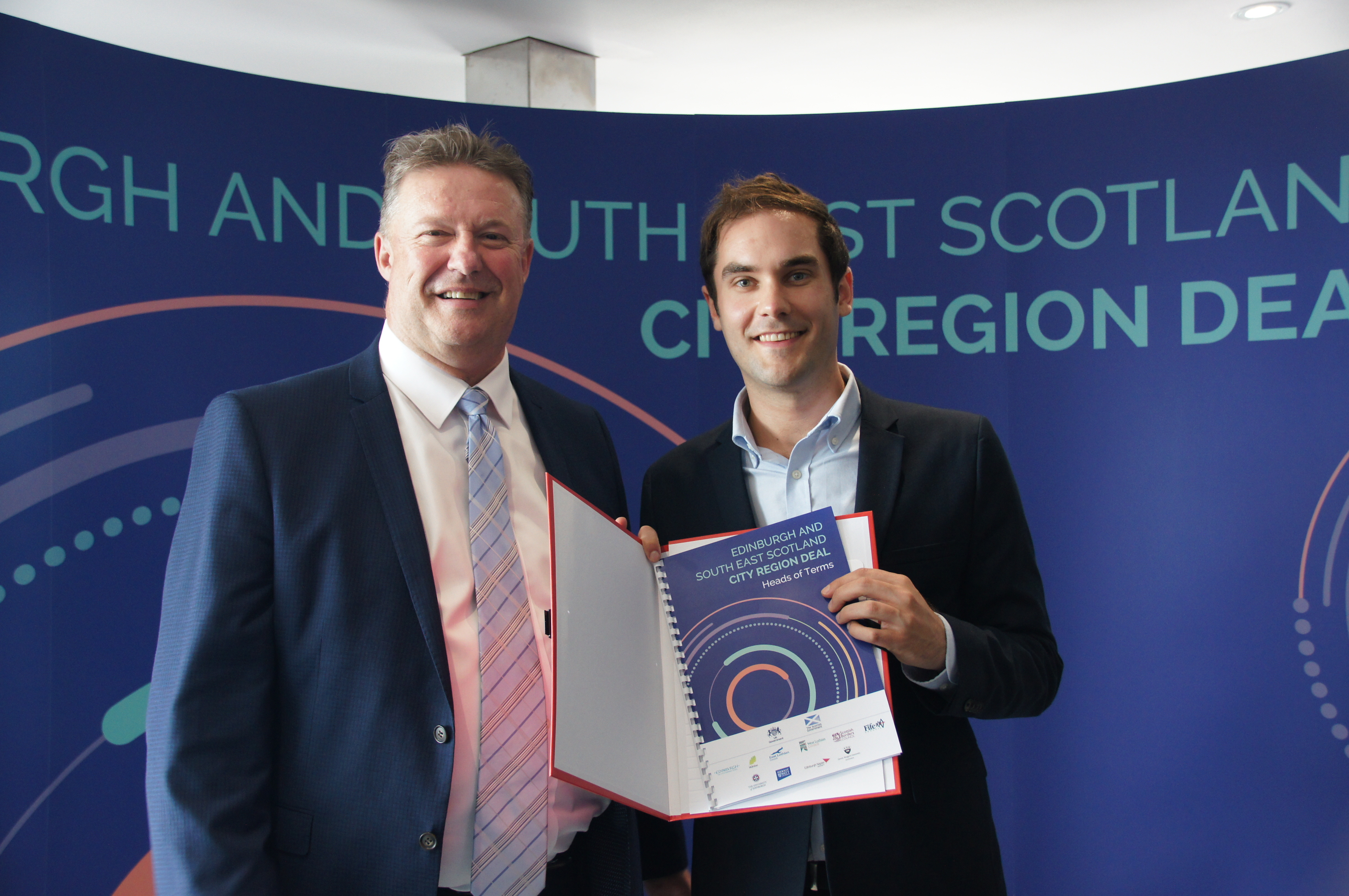 Council Leader Adam McVey has only been in post since the elections in May, and even then only properly since the coalition agreement was signed after the General Election was over.

He fully recognises that this is the result of a lot of hard work that others before him had been responsible for, particularly the former Council Leader Andrew Burns and Chief Executive Andrew Kerr who is pictured with him above.

Cllr McVey said : “It is a good day and in my welcome address today I did acknowledge the fact that Andrew Burns led this process for a lot longer than I did.

“The frantic efforts of me and other people on the council and The Scottish Government to get this nailed down and get a good deal for Edinburgh secured is only the final leg of this journey.

“But it is a good deal for Edinburgh and the region.”

We asked if this was what had been expected in the first place. McVey was careful in his answer saying : “It is about the scale that we were expecting so it is hard to find fault with it in that respect.

“In terms of the project everyone will be looking at the City Deal and thinking of projects that are not in there that people want to see.

We asked the council leader about the part of the funding for affordable homes. The council coalition has already set out plans for building more homes in Edinburgh, although we pointed out to Councillor McVey that we have not yet seen the detail of the coalition agreement as it has not been published yet. Does the City Region Deal help the coalition achieve their goals?

Councillor McVey explained that there is a commitment in the Heads of Terms that The Scottish Government will engage with the council on the social and affordable housing grant with regard to the affordable homes that the council needs to build.

He said : “We have to try and look at more long term security of that funding so that we can turn that aspiration into a firm reality of delivery.

“In terms of what’s in the City Deal it’s not just about social and affordable homes it’s about using innovative measures to deliver mid-market rent that can create an income stream for the Housing revenue account at the council.

“£250million in borrowing through this city deal will allow the council to build a lot more housing which is not social and affordable but is mid-market rent and will still help alleviate our housing pressures.

“There’s also another fund that will help private developers accelerate the development that they are progressing. So housing isn’t just about private, it isn’t just about social and affordable, it’s about everything. And Edinburgh needs everything. We’re a booming growing economy with hundreds of people moving here every week. We have a huge amount of pressure that we need to combat. This City Deal helps us do that.

For every pound that the UK and Scottish Governments put in there is to be some investment from the councils. In Edinburgh’s case they have committed to spending £5million on the new Concert Hall  in St Andrew Square. There will also be a contribution from the council towards the transport infrastructure that is needed in West Edinburgh, but apart from those two elements that is essentially the council’s contribution.

Councillor McVey concluded : “I think this deal will have an accelerator effect. I think it will have a compounding effect. The investment of £600million of public funds will develop billions of pounds in extra economic growth for this region.”