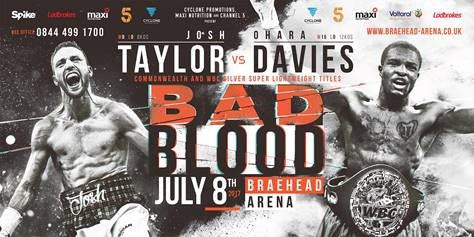 Jason Easton is confident his unbeaten nine-fight record will be intact after facing Belgium’s top-rated Steve Jamoye in Glasgow on Saturday.

If Easton succeeds then he will also win the IBO Intercontinental super lightweight title.

The former Scotland amateur international is the chief support the the Josh Taylor v Ohara Davies bill at Braehead Arena on Saturday.

Niddrie-based Easton’s bight will be broadcast live and exclusively on SPIKE UK and sponsored by Maxi-Nutrition.

And he comes to Glasgow as the current Belgium and BeNeLux super lightweight champion.

He is in the form of his life having recently beaten fellow Belgian Jean Pierre Bauwens.

He who lost a controversial majority decision for the WBA International title to Liverpool’s Tom Farrell.

Easton said: “I’m very fit and my training has gone really well. There is no doubt that Jamoye is an experienced fighter who has been in with quality opposition.

“His record indicates he will be a tough opponent and I’ve watched some of his fights on YouTube.

“He’ll come looking for me, particularly in the early rounds, and try to drag me into a brawl but it is my job to stay cool, keep my chin out of the way, work him out and then go from there.

“He tends to come at you in the first part of the fight but I am a counter-puncher and his style should suit me.

“He’s probably the most experienced fighter I’ve faced but I feel I’m strong and fitter and faster than I’ve ever been.

“I’ve sold 250 tickets for the fight so there will be a bid support in there for me and the atmosphere will be amazing.

“The hard work is done in training and my job is to go to Glasgow on Saturday and finish the job.”

Promoter Barry McGuigan said: “Easton vs Jamoye is an excellent addition to a huge night of boxing on July 8 at Glasgow’s Braehead Arena. It’s a very competitive fight, just like Taylor vs Davies in the main event.

“It’s going to be an excellent, action-packed fight, and I believe that Jason Easton can rise to the occasion and bag the IBO Intercontinental title with a first class performance in front of a big crowd at Braehead Arena.”