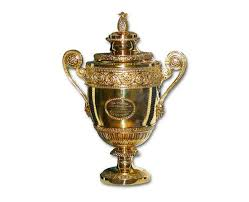 Jaguar, partner of both Wimbledon and Hibs fan Murray, are touring the UK with the World Number 1’s Wimbledon Trophy, and will be in the West Stand car park on Monday 19 June between 5pm and 7pm.

Supporters will have the opportunity to come along and get their photo taken with the trophy, as well as test their skills with a Batak reaction test and learn more about the Wimbledon tournament, which takes place between Monday 3 July and Sunday 16 July.

To help inspire the next generation of tennis talents, Jaguar is doing something that has never been done before in the history of the Wimbledon Championship, and is taking Andy Murray’s Wimbledon trophy on a nationwide tour of clubs and schools.

As Andy Murray counts down to the defence of his Wimbledon title later this summer, the gilt cup will be chauffeured between venues in Jaguar’s Official Car of The Championships.