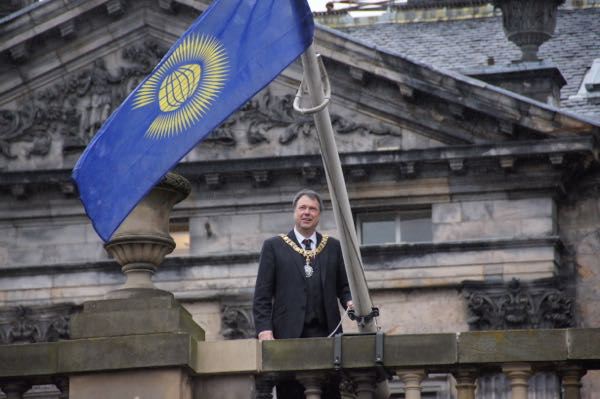 After what seems to have been a marathon five years as Lord Provost, Councillor Donald Wilson is running the Edinburgh Marathon this Sunday. You can support him through JustGiving, the link is below.

Here he looks back at his five years in office… I have to admit to feeling a certain amount of trepidation about handing over the chain, and everything that goes with it, to incoming Lord Provost, Frank Ross.

When it came to it, however, I was surprised to find that I was ready to move on to new challenges and develop a closer relationship with my constituents. Being the only Labour Councillor for Sighthill/Gorgie (where before there was two) I made a promise to those who selected me that I would do the work of two in the area.
The other reason is that there is very little that I set out to do that I haven’t achieved in the last five years. It has been a great privilege and honour to represent the City at home and abroad and I have poured every ounce of energy I could muster into it.

With a rough estimate of over 3,500 official engagements and events it has, at times, been a seven-days-a-week commitment, with never more than a few days until the next major speech.

In addition to being the Chair of the Full Council, the post comes with many other roles and functions such as Lord Lieutenant (the Queen’s representative in Edinburgh), Admiral of the Forth and Chair, Patron and board member of many other organisations.

It has been a time of commemoration and I am particularly proud of Edinburgh playing its part in services and ceremonies for the First World War, such as the Drum Head Service on the Castle Esplanade and Jutland in South Queensferry and Fife.

From Loony Dooks (3) to London Marathons (3, plus the Edinburgh Marathon to come on Sunday); raising over £300,000 for the One City Trust and other charities; supporting 40 defibrillators on trams through St John’s Ambulance; creating and running the Lord Provost’s Community Garden Parties for this city’s unsung heroes; to taking the Royal Edinburgh Military Tattoo as its Chair to New Zealand and Australia, it’s undoubtedly been a busy time but, throughout, I’ve tried to promote and develop a sense of belonging and community here in Edinburgh.

One of the great qualities of the post of Lord Provost is the ability to bring together people who otherwise might not have the opportunity of being in the same room under the banner of citizenship of our great Capital City.

I’d like to thank you for all your support over the past five years and wish my successor, Frank Ross, all the very best with his term. It truly is an enormous honour to serve and represent a city as beautiful as ours.

Finally, if you see me on Sunday still sporting the chain of office on my T shirt, I am doing this with Frank’s express permission and support – all for the benefit of the One City Trust. You can sponsor me here.

We filmed some of the former Lord Provost’s training a couple of months ago. Have a look at this!

The Lord Provost is training for two marathons from Phyllis Stephen on Vimeo.