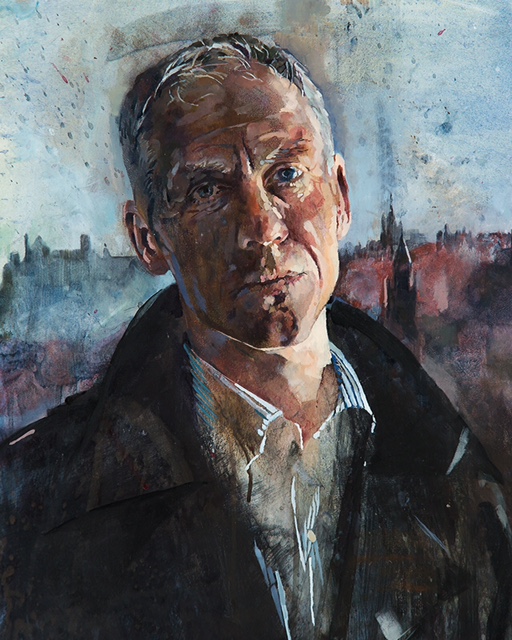 A portrait depicting fictional Edinburgh based detective Bob Skinner by award winning artist Aine Divine has been unveiled to mark the launch of Quintin Jardine’s latest novel, ‘Game Over’, the 27th in the Skinner series.

The painting was commissioned by the much acclaimed author and was completed at Aine’s studio in her Cockenzie house.

Bob Skinner first appeared in print as a Detective Chief Superintendent in ‘Skinner’s Rules’ almost 25 years ago and since then a loyal band of readers have followed his career as he rose to the rank of Chief Constable as well as his troubled personal life.

During that time fans have had their own vision of what ‘Britain’s toughest cop’ looked like, and now they can finally put a face to the name.

The description used to create the painting was provided by Quintin but the identity of the model/sitter is yet another mystery.

Aine told the Edinburgh Reporter: “I previously painted a portrait of Quintin which will appear as his profile picture on his hardback books and I have friends who are great fans of series so I thought that it would be great to put a face to Bob Skinner. I suggested that to Quintin and he agreed that it was about time that he honoured the character in some way.

“Discussions took place in early January and once it had been agreed we acted upon it right away and it was completed by the end of February.

“It probably took around two weeks to complete. I got the visual description of Bob from Quintin and we arranged for a model to sit for the painting although we don’t want him identified at this stage.

“Someone suggested that Bob should be in uniform with broader shoulders but we decided to feature Quintin’s distinctive leather coat.

“The background had to place Bob in Edinburgh and the distant view that captured the spires of St Mary’s Cathedral with the Castle beyond fitted the bill.

“The whole thing came easily to me and we are happy with the outcome. Quintin is an art collector and he sent me a picture of the painting hanging in his living room between paintings of Peter Howson and John Byrne.

“The portrait was officially unveiled on Tuesday by Roland Gulliver, associate Director of the Edinburgh International Book Festival during Quintin’s book launch. It was displayed on an easel with a cover over it and only Quintin and his wife had viewed it beforehand.

Aine Divine is an award-winning artist, originally from County Cork who now lives outside Edinburgh.

In 2014 she was a finalist in Sky Arts Portrait Artist of The Year and is proud to have been elected as a member of The Royal Scottish Society of Watercolour Portrait Painters.

She currently has a painting exhibited in the Mall Gallery, London by the Royal Institute of Painters in Watercolour.

When not working on commissions Aine enjoys teaching at workshops throughout the UK and more recently in Italy and South Africa.

Those attending the Easter Road tour during the Leith Festival can view some of Aine’s work within the boardroom where her paintings of Hibs’ legends such as Gordon Smith, Lawrie Reilly, Eddie Turnbull, Pat Stanton and George Best hang.

Game Over’ is the latest Bob Skinner mystery. When supermodel Annette Bordeaux is found battered and strangled in her Edinburgh flat, the former Chief Constable’s old team instantly have a global case on their hands. The victim’s husband, world-renowned footballer who is quickly discounted as a suspect, but there are others in the club with less watertight alibis.

Two years out of the game, Skinner can’t help getting his hands dirty. And as his old team work to convict the prime suspect, his own daughter, Alex, is the lawyer tasked with leading the defence. The opposing sides must work to find the culprit while the press watch on. But in this game, no one can be trusted, and there are murkier deeds still to uncover before the final whistle blows.