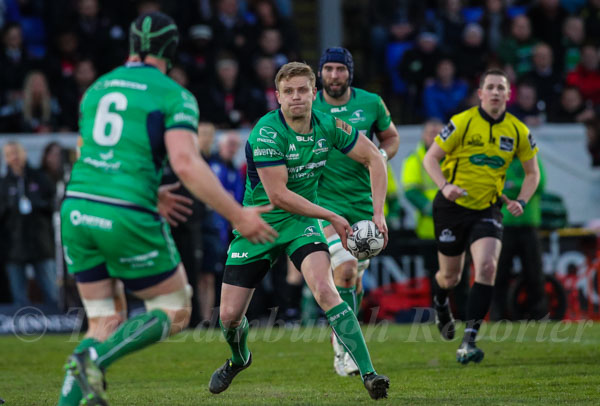 Connacht hold on for the win at Myreside. Current PRO12 Champions, Connacht, were the visitors to Myreside on Friday night for the latest Round in the Guinness PRO12 League and despite a substantial points gap, were only a place above a struggling Edinburgh side who hadn’t managed a win in the league since 31st December.

However, the metronomic boot of Connacht’s stand off, Steve Crosbie (above), ensured that they would have to wait another week for their next chance.

Crosbie scored the first of his 17 points a few minutes later for an, against the run of play, 3-0 lead.

Things started to go Connacht’s way in the 23rd minute when a reversed scrum for delaying the put in, gave the visitors possession, albeit in their own 22, and the chance to gain some ground.

A 26th minute penalty from Crosbie for 6-0 was followed up a few minutes later by the fist try of the match. Winning their line out in a rare visit to Edinburgh’s 22, the ball was moved through the backs and across to the left, before play swung back towards the centre. A neat step to the right by scrum half, Keiron Marmion, opened up a gap in the defence and his pass to flanker, Eoin McKean meant the No. 6 had a huge gap to trot through under the posts. Crosbie then knocked over the conversion for 13-0 just on the half hour.

The Edinburgh faithful then had to watch a 33rd minute penalty attempt from Weir slide past the upright before enduring another, successful, Crosbie strike to take the teams into the break at 16-0 to Connacht.

The first 20 minutes of the second half were an agonising watch for the local support as Edinburgh shot themselves in more than one foot, with a string of infringements and allowing Crosbie to keep the score board ticking along nicely with 49th and 60th minute penalties and a 22-0 lead.

However, that signalled the start of Edinburgh’s comeback and three tries in the final 24(!) minutes.

Building pressure on the Connacht defence was amplified by a long, rolling maul down the left. As play opened up, a pass from Edinburgh’s Nathan Fowles was intercepted by Connacht’s Teirnan O’Halloran and the ball cleared. Unfortunately for O’Halloran, he was spotted as being offside and a TMO consultation lead to him being carded for deliberate foul play preventing a certain try. So, penalty try awarded followed Weir’s successful conversion and it was 22-7. Three minutes later, they were under the post again. This time under their own steam as the visitors were still reeling from the previous incident. Maintaining their momentum, Hamish Watson was handed the ball a few metres out from the line and he crashed through the defence for Edinburgh’s second try. Weir slotted the kick home and the win was suddenly looking possible at 22-14.

The home side continued to dominate proceedings going into the final 10 minutes and it was pressure rewarded as full back, Glen Bryce piled over in the left corner for the third try with 73 minutes on the clock. Weir missed the touch line conversion, but, with just about nine – stay with it – minutes left to play, the crowd were decidedly happier than they had been for the majority of the match.

However, it wasn’t to be be, and, as the match entered the 84th minute and Edinburgh once again on the attack, a fumbled ball ended the what-might-have-been story with a nail biting 22-19 win for the visitors.