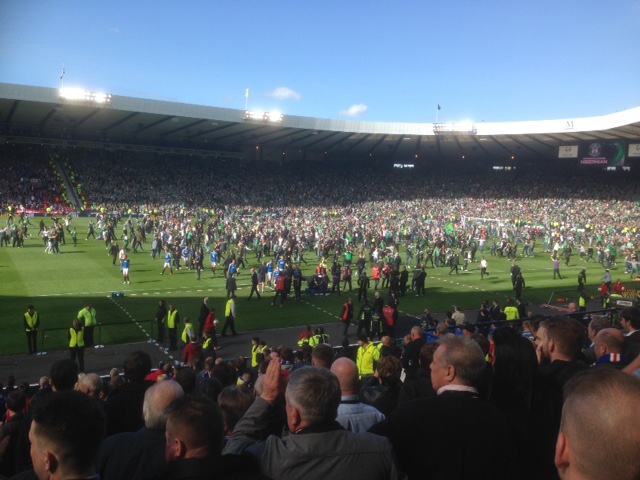 Hibs have reminded supporters not to enter the field at any point before, during or after matches, both at Easter Road and away from home as such incursions have significant potential ramifications both for supporters and for the club.

The warning comes in advance of tomorrow’s game against Queen of the South where victory couple with Falkirk dropping points would ensure the Championship title and automatic promotion for the club.

Supporters who enter the field of play risk a football banning order amongst other penalties.

Any investigation will also be detrimental to the club, both in terms of resource wasted and in the cost of any sanction imposed on the club.

Supporters were also reminded that the use of pyrotechnics is strictly forbidden at football matches.

The use of pyrotechnics, including smoke bombs and flares, within football stadiums is extremely dangerous and is a serious offence, with the Club having a zero tolerance approach with regards to the carrying and usage of pyrotechnics at our matches. Recent events have led to two supporters receiving indefinite bans.

A Hibernian spokesperson said: “We are approaching an exciting end to the season with plenty to play for in the league and Scottish Cup.

“We hope supporters can back the team and enjoy the remaining games in a responsible manner.”