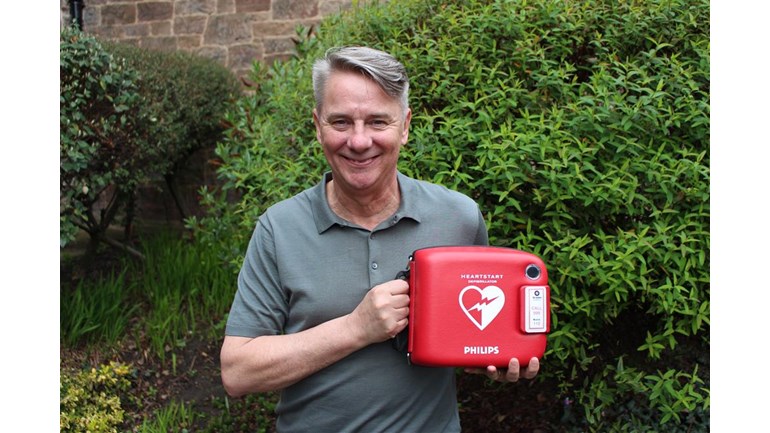 Hibernian are encouraging supporters to back fellow fan Paul Burns in his efforts to raise funds for more defibrillators.

Hibs’ fan Paul was playing football at the Hibernian Training Centre last year as part of the Football Fans in Training (FFIT) programme when he suffered a heart attack. He was rushed to hospital after being treated by Hibernian staff, including the  use of a defibrillator, and is thankfully now in good health.

The application of the defibrillator saved Paul’s life, and he is now raising funds to install further defibrillators in places without the facilities.

Paul said: “On the 3rd of April 2016, I decided not to go a run up the Pentland Hills, instead I would go to play football at the Hibernian training ground  – a decision that saved my life.

“On that Sunday morning  I headed off to the training ground for the first time to play football with my fellow “FFIT” (football fans in training) graduates. It’s a wonderful initiative developed across most football clubs in Scotland, if you are reading this and feel a tad overweight it’s well worth looking into.

“I travelled like a teenager playing for a new boy’s club for the first time. I was so excited driving to the ground. I arrived with no time to warm up, was told what team I was in and the game commenced. For fifty minutes I felt like I was rolling back the years. I had only ever wanted to become a professional football player and have wonderful memories of my younger years training with Hibs as a Schoolboy, Captaining Edinburgh Schools and winning a Scottish Juvenile Cup with an unbeatable Tartan/Hutchie Vale team.

“I didn’t feel quite myself in the last ten minutes of the match and I was relieved when it  ended. However, as it had been such a great match everyone wanted to play an extra half hour. A couple of the guys expressed their concern at how I looked but I didn’t want to drop out and make it an uneven number so decided to take it easy and play. After only about 5 minutes I got the ball square in the nether regions and collapsed. I can remember everything about that day until that moment.

“Many thought that I was having an epileptic fit, but they weren’t to know that I was having a massive heart attack which resulted in a cardiac arrest. Hibs Physiotherapist, Kitty Forrest was working that morning and was asked to help. She firstly administered two rounds of CPR and after I failed to respond she used a defibrillator to get my heart back into rhythm. I was rushed to hospital and had stents inserted to unblock my arteries.

“It was only when I went back to the training ground a few weeks later that I realised how
many people assisted in saving my life that day and I am eternally grateful to each and every one of them. Thank goodness Kitty and the defibrillator machine were at hand otherwise I would  most certainly have died.

“I am writing this on a Train travelling to London and I am thinking how lucky I am. I’ve had a great life so far and I know there are many more great days to come. My Wife and I are visiting London with our son Philip to see our youngest Ronan make his West End Musical Theatre debut. It will be a magical day shared with my loved ones. Plus you never know, I might even get to see Hibs win the Scottish Cup….Again!!!!

“It wasn’t my turn on the 3rd of April 2016. My life was saved by the use of a
defibrillator. That’s why I am setting myself a target of raising £5k to provide funds for 3 defibrillators along with the necessary training required to administer them. I am doing this through St John Scotland and if you feel it’s appropriate you can pledge a donation.”