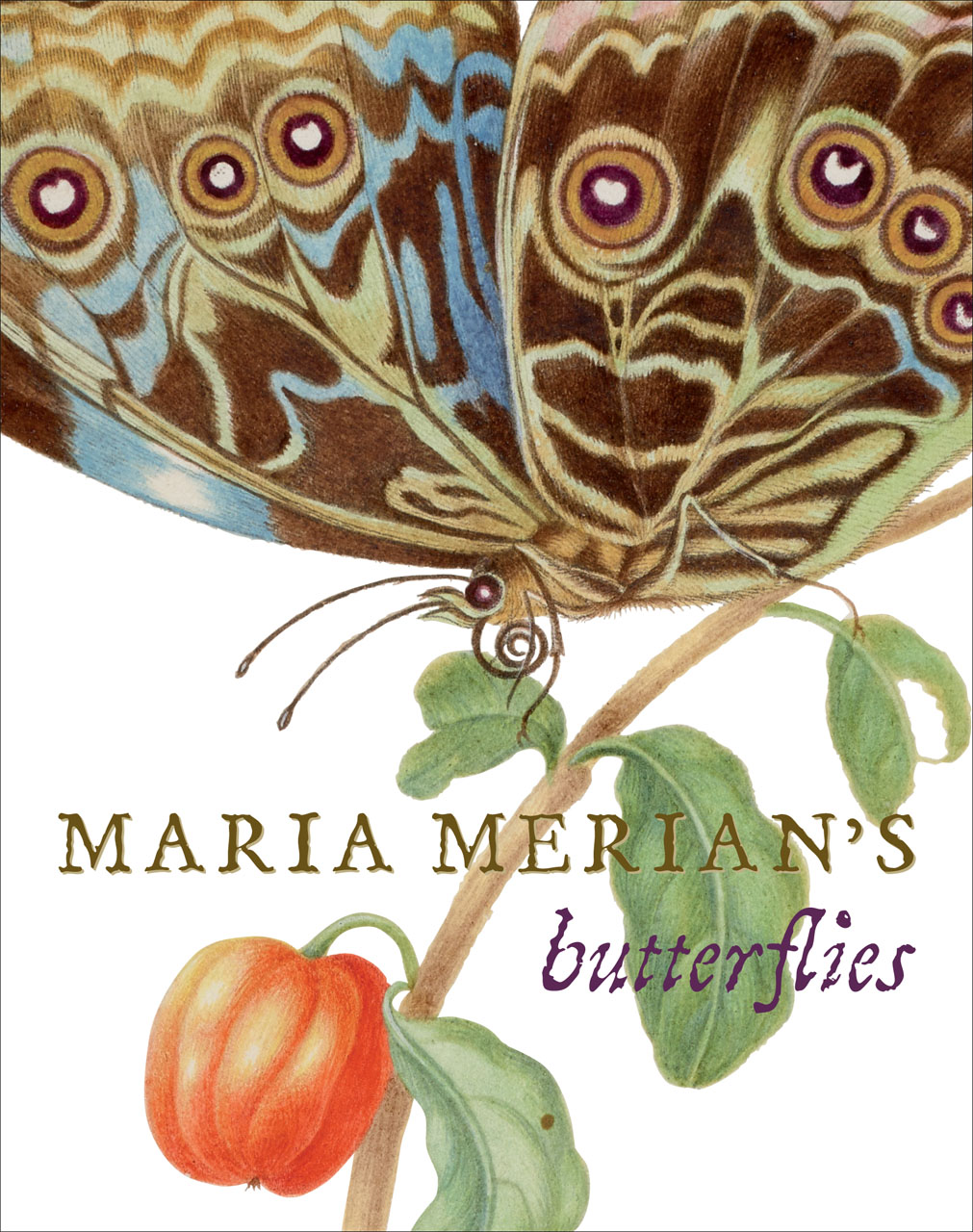 A 52 year-old German artist and naturalist and her 21 year-old daughter set sail for a remote South American country, their plan to find, study and record insects in their native habitats. A little different, perhaps, but not that remarkable; people travel all the time.

Except that this journey begins in July 1699, at a time when scientific expeditions of any kind are uncommon, and an expedition by two women virtually without precedent. The women are Maria Sibylla Merian and her younger daughter Dorothea, and their research into the wildlife of Suriname, the smallest country in South America, is to have a profound influence on the science of entomology for generations. In Maria Merian’s Butterflies, an absorbing new exhibition at The Queen’s Gallery, Palace of Holyroodhouse, Maria’s story is told through a delightful collection of illustrations, brought together to celebrate the 300th anniversary of the artist’s death.

Maria, a descendant of the German branch of the Swiss Merian family, (founders of one of Europe’s largest 17th century publishing houses), was born in Frankfurt in 1647. She was taught to paint and draw by her stepfather, the artist Jacob Marrel, and his pupil Abraham Mignon. From an early age Maria was also fascinated by the life cycle of insects; at 13 she was already painting images of insects and plants. She later wrote that, at a time when most people thought insects ‘vile and disgusting’;

‘I spent my time investigating insects. At the beginning, I started with silk worms…I realised that other caterpillars produced beautiful butterflies or moths, and that silkworms did the same. This led me to collect all the caterpillars I could find in order to see how they changed.’ After she married in 1665, Maria moved to her husband’s home town of Nuremberg, where she continued to paint, draw and teach.

At this time most people still thought that insects were spontaneously generated from rotting matter. The concept of metamorphosis was largely unknown, although the Italian scientist Francesco Redi had shown that maggots only developed in meat when it was left open to the air; meat in a sealed jar remained maggot-free. It was also believed that butterflies were new beings born out of the decay of dead caterpillars; Redi’s experiments provided the crucial challenge to these fallacies and paved the way for the study of metamorphosis. In 1679 Maria published The Wonderful Transformation of Caterpillars and their particular plant nourishment; she bred her own butterflies and moths, and her observations led her to note that individual species depended on particular food plants – they didn’t just eat anything going. She has been called ‘the first ecologist.’

By 1685 Maria had separated from her husband and was living with her two daughters in a strict religious community at Waltha Castle in Friesland.

In 1691 the family left the Labadists and moved to Amsterdam, a centre of scientific research, artistic production – and trade with Dutch colonies.  Ships brought back exotic insects and birds for collectors, there was a research garden full of tropical plants; now Maria found herself amongst a vibrant community of natural historians. She wrote;

‘…what beautiful animals came from the East and West Indies…. In these collections I had found innumerable other insects, but finally if here their origin and their reproduction is unknown, it begs the question as to how they transform, starting from caterpillars and chrysalises and so on.’ But Maria was frustrated – she needed to study life cycles of live animals, not dead specimens.

‘All this stimulated me to take a long and costly journey’

She obtained permission from the city of Amsterdam to travel to Suriname (her daughter had by then married Jakob Hendrik Herolt, a successful merchant trading with the then Dutch colony), selling the contents of her studio to fund the trip.

The voyage took two months; on arrival the women took a house in the capital, Paramaribo. At this time around 700 people of European origin were living in the city and on plantations, including Dutch settlers, Portuguese Jews, German Jews and Huguenots from France. From her new home Maria went out into the forests with local guides, looking for caterpillars. And what she found, she painted.

Unlike most illustrators of the time Maria did not depict the life cycles of animals in a straight line of images (egg – tadpole – froglet – frog); she wanted to show her insects in naturalistic compositions, usually with the plants on which they fed.

In Branch of West Indian Cherry with Achilles Morpho Butterfly, a caterpillar crawls up a stem, a butterfly with closed wings lands on its tip, while another hovers in the air beside it. Maria drew animals and plants life size, making sketches from nature then using them in her final compositions. Apricot Branch with Dark Dagger Moth Caterpillar shows every hair on the caterpillar’s back as it stands on a leaf, head held erect, luscious ripe apricots hanging below it. The fruits in many of these beautiful pictures were as yet hardly known in Europe.  In Ripe Pineapple with Dido Longwing Butterfly (Royal Collection Trust / © HM Queen Elizabeth II 2017) a caterpillar with bright blue eyes crawls up the fruit, while a blue and brown butterfly flies beside it. Maria had never tasted a pineapple before, but in Suriname she found them growing in the wild. Describing the pineapple as ‘the most outstanding of all edible fruits’, she also warned her readers that the ‘hairs’ on the fruit could make eating one a painful experience.

Bananas had been introduced to Suriname from Asia; their leaves were used as platters for baking bread. In Branch of Banana with Bullseye Moth  we see the bright red leaves above the yellow fruits. Maria loved the intricate patterns and colours found on some butterflies’ wings, saying of one, the Red Cracker, that ‘its beauty cannot be described in words’.

Maria always strove for accuracy in her work but sometimes she did get things wrong; in Branch of Duroia eriopila with Zebra Swallowtail Butterfly the caterpillar she draws belongs to another variety, and in Branch of Pomegranate with Lanternfly and Cicada she suggests that the two insects are different stages of the same insect, when in fact they are two different animals.

Working mainly from her own observations, Maria also tried to get information about the country’s flora and fauna from local people, but found that most European settlers were only interested in the cultivation of sugar cane. She urged them to diversify and tried to show them how other native plants could be cultivated for use – grapes, for example, grew well in Suriname, but Maria found that the country imported wine from Europe instead of making its own.

Maria’s other great interest was reptiles, and especially the metamorphosis of amphibians. She reared frogs from spawn, drew Giant Water Bugs eating a marbled frog, and captured a Suriname Toad, observing that the female incubated her eggs in ‘blisters’ on the skin of her back. Branch of Guava Tree with Army Ants, Pink-Toe Tarantulas, Huntsman Spiders and Ruby-Topaz Hummingbird  suggests that a tarantula can eat a whole hummingbird, but this is still a controversial theory. The picture shows ants marching up and down the branch, their delicately drawn legs providing a sharp contrast to the fat spiders, who are clearly the thugs in this scene.

Although they fascinated her, Maria was not blind to the damage that many insects could do, describing cockroaches as a nuisance and noting that ants could eat a whole tree ‘bare as a broom handle’ in one night. She was also unable to sleep for the racket made by ‘her’ insects chewing their way out of the wooden boxes in which she tried to keep them. Maria and Dorothea had planned to stay in Suriname for five years, but Maria’s poor health (she had probably contracted malaria) meant that they returned to Amsterdam in 1701, bringing numerous preserved specimens with them, including a crocodile. Once home she prepared her work for her magnum opus, Metamorphosis Insectorum Surinamensium. She hoped to write a second volume about Suriname’s reptiles, but suffered increasingly poor health and died in 1717. After her mother’s death, Dorothea and her husband went to work at the court of Peter the Great in St Petersburg, taking Maria’s drawings with them; many are still there in academic collections.

The paintings shown in this exhibition are luxury versions of the Metamorphosis plates, which were partially printed then hand-painted onto vellum; they were acquired by George III and now form part of the Royal Collection. Metamorphosis Insectorum Surinamensium was reissued four times; dedicated to ‘all lovers and investigators of nature’, it was only printed in Dutch and Latin as there was insufficient backing for an English version.

The book influenced many natural historians, among them Linnaeus, Baron Albert von Sack and Mark Catesby. Illustrations from Metamorphosis Insectorum Surinamensium were used not only for scientific purposes but also for designs on fabric and porcelain. An edition of this magnificent testament to Maria’s work can be seen in this enlightening exhibition. Maria Merian’s Butterflies is at The Queen’s Gallery, Palace of Holyroodhouse, Canongate until 23 July 2017.

The book accompanying the exhibition may be purchased from Royal Collection Trust shops or online.

Images of the exhibition by John Preece.