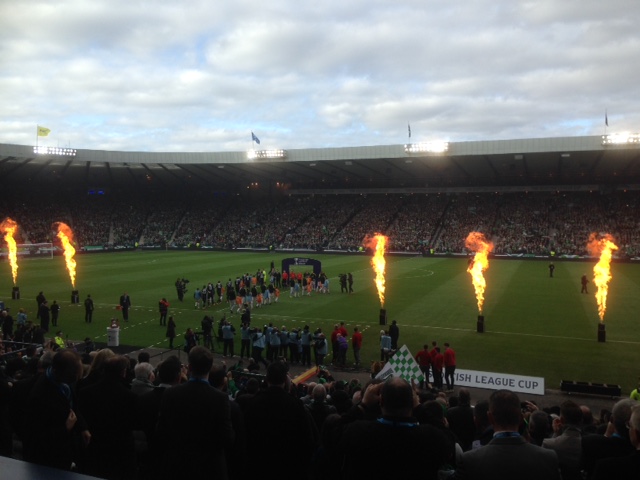 Neil Lennon is determined to achieve another trip to Hampden although he is expecting a tough game.

Speaking to Hibs TV he said: “Ayr are possibly coming onto a game. I was at their last game against Raith, it was hard fought and both teams had their chances. One goal was always going to decide it, and it went Ayr’s way.

“They’ve had a great 18 months. They’ve won promotion, they’re fighting their corner in the Championship and they are in the quarterfinal of the cup, so they are a team we have to respect.

“Equally so, at home we know we can beat anyone, so I want us to have another good day tomorrow.”

Brian McLean  joined Hibs this week after a spell with Brunei DPMM in the S.League in Singapore, and with injuries to Paul Hanlon, Liam Fontaine and Jordon Forster and Darren McGregor’s suspension he is likely to feature this afternoon.

He said:  “The cup still holds a bit of romance, so that’s something to hold onto. For the fans to have that type of passion and to listen to them sing Sunshine on Leith is unbelievable and it does give you goosebumps.

“We should be able to use that as a driving force to get to that stage once again.”

Tickets are on sale at the Hibernian Ticket Office from 10am-1pm. Thereafter tickets will only be on sale from the Ticket Pods, which are in operation at the East, Famous Five and West Stands, subject to ticket availability. The West Stand Ticket Pod is located at the south end of the stand. Ticket pods are open from 1pm.

Supporters are advised purchase tickets online and use the print at home option to beat the queues at Easter Road, with this option available until 90 minutes before kick-off.

From 1pm the Ticket Office will only be dealing with ticket enquiries, ticket collections and disabled supporter ticket sales for Saturday’s match.

Both suites in Behind the Goals will be open this Saturday from 11:30am for those in possession of a match ticket.

Lifelong Hibernian fan and musician Chris Tracey will be back in the Almond Suite of Behind the Goals tomorrow from 1.00pm until kick off. Chris is a well-known face on the Edinburgh music scene where he performs at a number of venues and has been playing in Behind the Goals since December. He will be performing a wide range of covers and of course some Hibs classics, arrive early to avoid missing out.

Former Hibee Garry O’Connor will also be round for a pre-match interview.